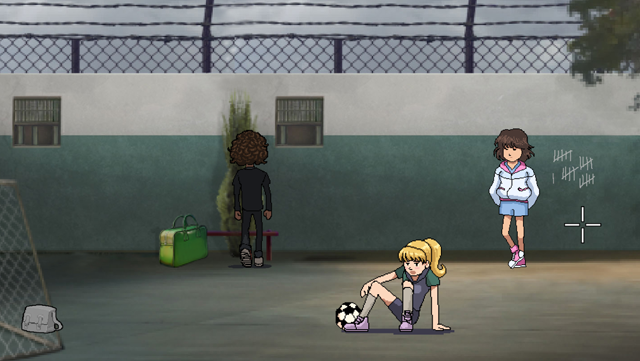 What do you get when you combine a point-and-click featuring retro graphics with UFO sightings and a club devoted to observing extraterrestrial phenomena? Well for lack of a better word, you get Sol705, the club's namesake, trying to entertain themselves during a (whole) week of vacation. Of course, part of the greatest mystery for this group of boys comes in the form of interaction with what might feel to some of them like an extraterrestrial race: the opposite sex!

But let's back up a tad here. After a thrilling introduction that foreshadows an apparent abduction by an alien flying saucer, the scene cuts to a school setting before the game gives you control of the main character. You've just received your report card and it does not bode well for you at all, so you carelessly toss it onto the floor and head for the exit, ready to be liberated at last.

Unfortunately for you, the school headmaster Father Carlito and his booming voice stand in the way of your mad dash to sunlight. Read as always, he lectures you about how he saw what you did with your report card, making it quite clear that you will not be allowed to leave until you bring it to him. Unbeknownst to the character (but handily visible from our vantage point of the scene), the janitor sweeps the fragments of the tattered piece of paper away and out of sight. Even worse, he seems none too sympathetic for kids trying to get an important piece of paper back - treating you with nothing but contempt when you plead your case to him! Worse still, he seems to be getting the way of potential alternate escape routes. Perhaps there is a way to placate this stiff old man and get what you need after all, though.

When you eventually do manage to escape the school, whose boring principal is likely still droning on about just how awful vacations are along with other issues, it seems the adventure has just begun. Your brother, who happens to be your polar opposite in academic achievement, has threatened to tell your parents about your lackluster report card unless you can supply him with a bassist for his band, and do it pronto. Reluctantly, you set off on an expedition through the city to try and find someone who might fit the bill. But when most of the people you try to ask offer little help and instead give you runarounds, you begin to lose hope and start to think about having to confront your parents after all.

Although Sol705 will likely give you several hours of gameplay as you explore the carefully crafted world and venture into many different scenes, it describes itself as a demo for a larger product to come. If indeed a larger project in this vein comes to fruition, it will undoubtedly be grand when finished. One aspect of this game I really appreciated was the clear and high-quality voice acting that was paired with the story. It greatly helped the story and the characters to come alive, rather than if it had just had sound effects and text you had to read to yourself. There are a number of grammatical issues with some of the texts (subtitles) in the game, but most of them aren't too big of an issue, especially with this opportunity to hear the relevant information versed aloud.

One thing that I think might be missing is a hint here and there or a bit of a hint system. Sometimes I was stuck for a while exploring the scenery and retracing my steps several times to try and figure out something I might have missed. On the positive side, though, the game has a clear way of pointing out what is clickable and what is not via a changing cursor, so at least it didn't devolve into an endless pixel hunt. The walking and animations in general were also smooth and flowed nicely.

To play Sol705, you use your mouse to point and click on objects and parts of the background. The cursor changes to an arrow when you mouse over parts of the screen where you can move to a different scene, and opens from a cross shape when you encounter something that can be interacted with. You have options to 'examine' (the eye icon) such objects or 'touch/take' them with the hand icon that pops up. At other points you will have a chat bubble that can be used to have a conversation with someone. You're in for a quirky adventure in the first adventure of something that promises to be much bigger. As the main character might say: twisted whisker diodes!

Hi there!! thank you so much for this great review, truly appreciated!!! I’m really glad to know that you enjoyed my game some much 😁
I’m also happy to annonce that I already added some improvements to the -inexistant- hint system in the new version of the game released a few mimutes ago.
Pressing the space bar will now spot items and important zones on each scene, this works for all windows and linux version and android as well...yes, the Android version is available for free at the google play store right now 😜 and everybody is welcomed to download it!
Same improvements are coming for
the Mac version tomorrow I hope...

Once again, great site and fantastic review, it has been great honor!

Hello, glad to hear you liked our review!

The hint system sounds great, so I'll have to check out the updated version at some point. I hope you keep up the good work!

Nasty bug causing app to close in some devices has been eliminated! Be sure to update your version to 201. Also new hint system added. Thank you and sorry for the inconvenience!

Hello there, some news concerning the Android version:

Be sure to install version 213 from Google Play Store, as some incompability issues has been resolved. Also the game now plays in widescreen for tablets and smartphones and a hint system added (press and hold somewhere in the screen to reveal hotspots).
Thank you so much!

Hi again!! I'm really proud to let you know that the IOS version of the game (iPhone, iPad) is available from now one, please feel free to download and give your advice at the AppStore
thank you so much guys!

Hi there, thank you so much for all the votes!! And by the way I have some cool news for Iphone and Ipad users as the game is already available at the Appstore! So be my guests!