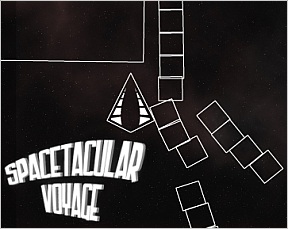 There's no denying humans and asteroids live a troubled coexistence. It's not that they're enemies per se; let's just say that their interests rarely coincide, and if one just magically ceased to exist, few tears would be shed by the other.

Sash MacKinnon's Spacetacular Voyage, the latest chapter in this saga, puts you at the helm of a single human ship. By now, the humans have developed collision-proof armor for their ships (probably using some sort of advanced nano-muffin technology). However, they haven't yet figured out a way to negate the laws of physics, and the asteroids know this.

You must make it through 10 levels containing deluge after deluge of asteroids without letting them knock you all the way to the bottom of the screen. But of course, you're not going to just stand there and take the abuse; you've got some abuse of your own to dish out! Crash into as many asteroids as possible for extra points. Plus, if you ever get into a real jam, hit the [space] bar to create an explosion, which will get those asteroids off your ship in a hurry!

Spacetacular Voyage's glowing vector graphics pay tribute to the original Asteroids, but it leans much more heavily on physics. The collisions are very elastic, but your ship's shape is designed to deflect them away from you while still keeping your momentum relatively high. The balance between making as many collisions as possible while keeping your ship afloat is a great touch, allowing two levels of play: simply completing the levels or going for a great score. Even the levels themselves have been thoughtfully designed, throwing something new at you with each new stage. And what would a simplistically modern game be like without some taunting and bad puns? You feel bad when you fail a level, and the game makes you feel even worse by telling you exactly how much you FAIL, which inexplicably makes you feel better about failing. That's some serious psychology at work.

So while it may not be earth-shatteringly groundbreaking (superfluous redundancy is still hilariously funny, right?) or gorgeously lush, Spacetacular Voyage offers ten levels of solid gameplay with plenty of replay value. Really, what more could you want?

Great game, but tough. I can't seem to get past level 8 - have tried a few different strategies.

How do you guys handle (what I imagine to be) the last phase, after the "snake" phase?

It's not a complex strategy, but here's how I did it:
Stay in the center until just before the big circle comes. When the big one comes, you need to be to either side.
Get there by building up some lateral inertia. Get a "running" start with as much room as you have, and use an explosion to plow through the wall of small circles.
As those walls start pinning you to the side and forcing you down the screen, you need to get back to the middle with the same tactic.
(I think there are 3 or 4 big circles. You can safely head back to the center after they've passed.)

Whatever you do, don't keep pushing steadily on the wall to try to get through. It won't let you. You need the inertia and/or the explosion.

Very original! Some of the levels were really a challenge to beat. I can only think that the Expert Mode is just MacKinnon's idea of a joke. I mean, look at the asteroids. They've got to be at least 50 times faster than light-speed. Or something.

Hey guys, any help with level 10? I struggle to find a way past the big bricks.

Great game, but I am stuck at lvl ten at the part when

The game decides to kill you and a wall of death comes.