Following the highly-successful footsteps of puzzle-RPG hybrid Puzzle Quest: Challenge of the Warlords, Spandex Force, from KarjaSoft, combines several match-3-style jewel swapping games with a sim-like spoof of superhero life. Patrol the city surrounding your headquarters searching for thieves and citizens in need. When you engage a bank robber or intervene to save a helpless human, a simple puzzle interface appears as your challenge to complete the task. It's a surprisingly fresh take on a rather tired genre that scores major points for wearing a wacky sense of humor on its sleeve. 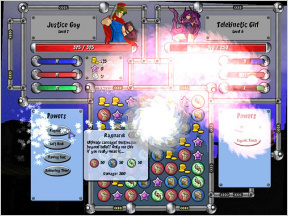 Life begins as you customize your hero's attire and general appearance. Chartreuse spandex and blaze orange eyes? Periwinkle hair and white skin? The color palette is literally your canvas and you can go as wild as you like. After creating a character you're turned loose in the city. The overworld section of the game features your base near the center of town with citizens wandering the streets and buildings within your radar. From time to time someone will need help, whether it's dodging a runaway car, avoiding falling pianos, or just rescuing cats from trees. Click on distressed humans to launch a puzzle minigame. There are several match-3 games contained in Spandex Force, each one a slight variation on the Bejeweled formula. Whether you're swapping tiles, choosing groups of them or making matches to earn points to use special abilities, the goal is always the same: win the puzzle, win as a superhero.

Swapping tokens offers more of a reward than just saving an old lady's cat. You also earn gold, reputation points and clue points during these mini-games. Use the cash to buy new superpowers, upgrade your headquarters, or equip yourself with spiffy gear. Reputation points are similar to gaining levels in an RPG and allow you to take on bigger crimes, badder bosses, and uncover more goodies in the city. Clue points help you solve big heists as you continually quest for the root of evil in fair Vigilance Valley. 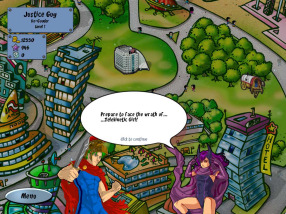 Analysis: Spandex Force bends genres quite well, keeping the superhero management aspects to a minimum and puzzle elements short, simple and sweet. Its obvious inspiration is Puzzle Quest, but Spandex Force differentiates itself by spinning its mechanics around a wacky superhero concept. You won't find the level of depth, long-term reward or level of addiction Puzzle Quest delivers, but you will find a great game that tries (and succeeds) in doing something slightly new for the casual genre. Plus you'll laugh. Laughing is fun.

Unfortunately one of the downfalls of Spandex Force is its visual presentation. The game lacks any sort of pizazz beyond the stylized comic book-style drawings, and the developers cut so many corners it starts to show. Part of this lends a sort of campy charm (which fits the game's theme), but presentation can make or break a game, and Spandex Force doesn't push itself as a winner from this standpoint.

Another quibble is a tendency towards repetition. Sure, match-3 puzzles can be fun in small doses, but when it's your main course served over and over again, you'll long for something different. Fortunately the game keeps things moving at a fast clip to avoid going stale, but after some quality time with Spandex Force you'll be ready for a break from gem swapping.

While it doesn't excel in any particular field, Spandex Force takes a sharp jab into unfamiliar territory and manages to create something new and interesting. You won't find as satisfying of an experience as Puzzle Quest, but the irreverent humor and tasteful blend of genres will definitely draw you in.

I was very curious about this game when I first saw it, but never bothered to give it a try until now.
The general concept was real nice, certainly, but it got boring really fast.

"The color palette is literally your canvas..."

1. Wouldn't that mean it was physically made of closely woven cotton, hemp, or linen instead of glowing pixels?

2. Wouldn't the color palette be your palette?

I looked at the screenies & decided to post. The powers that worked best for me are:

As for whether this game is great, I'd say it's not bad. Pretty ok. The idea was good, but it needs more variety.

Stands out slightly from the flux of recent games that are worth playing for about 2 hours (just long enough to get you to buy).