Sparkle 2 has just arrived from 10tons, the team behind the mobile physics puzzle games Tennis in the Face and King Oddball. And you know what? It looks gorgeous. It plays gorgeous, too, if you can pretend that's a thing that makes sense. Smooth marble popping puzzle action combined with a soothing soundtrack and drop-dead stunning visuals. It's everything you could want in a simple casual matching game. 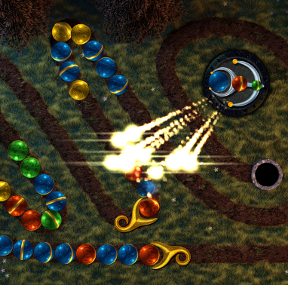 Marble poppers have been around a while, and Sparkle 2 doesn't alter the basic formula all that much. A trail winds its way through each level, with a pusher on one end rolling lines of colored marbles towards the other side. Somewhere near the center is the spinner, an orb-crafting device you use to spit out marbles to make matches on the chain. With careful, precise timing, you might just keep the line of invading balls at bay!

Setting up combos in Sparkle 2 earns you power-ups, and boy are they useful little things. Some of the simpler ones give you a blast of magic that fires from the spinner to eradicate marbles. Others get rid of certain marbles, paint them the same color, push them backwards or otherwise help you stay in the game. Either way, you have to hit dropped power-up icons with a marble to activate them, and you've only got a few seconds to do so before they disappear. Act fast for much epicness! 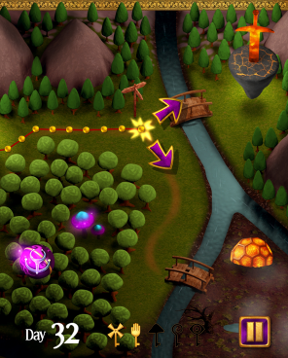 Analysis: Sparkle 2 has the wonderful ability to make you love simple match-3 games all over again. Firing marbles is a game as old as... well, probably as old as marbles. But when you pair it with a beautiful audio visual package (somewhat reminiscent of Harry Potter, actually), add in some exciting power-ups, and design stages that toy with your sense of urgency, it's kind of hard not to fall in love.

Downsides to Sparkle 2 are largely taste-based in nature. It's a very simple game, and the mechanics described above are pretty much all you'll see throughout the experience. There's survival mode along with achievements, equippable enchantments and other unlockables, but don't expect much deviation, which isn't necessarily a bad thing. Sometimes you just want to kick back and clear some marbles.

Predictably gorgeous and a lot of clean fun, Sparkle 2 adds a little bit of old school magic to your mobile device. Easy to play, no fussing with in-app purchases or other distractions, and it even has a colorblind mode to make sure as many people as possible can enjoy it!

Excellent game with good development of difficuly, great design and nice challenge and survival modes. It's only downside is that once you finish the adventure mode, there's no way to start from the beginning, no way to create a new user. Also once the challenges are complete, it is possible to play all levels again but the game randomly chooses the difficulty level. I wish I could play the whole adventure mode again and again :-)