A hypnotic blend of Asteroids and 2001: A Space Odyssey, Ian McLeod's Spheres of Chaos is one of the all-time great indie shmups and has long been a favorite of mine. The downloadable game is available for Windows, Linux and RiscOS, and the full version costs just $10 is now FREE!

The game begins with a triangle shaped ship floating in space with some spheres. Move the mouse to rotate the ship, and press the right mouse button to move. The left mouse button fires, while the left alt key breaks and the left control key activates hyperspace, teleporting you to a random location on the screen. Most enemies split apart after being attacked, producing several smaller versions of themselves that may even split again after another shot. The classic Asteroids strategy of minimizing clutter by completely destroying one object at a time applies here, as well... at first.

A great deal of the game returns to the familiar theme of reproduction. It is reflected in the beautiful emergent soundtrack, the patterns of particle effects during explosions, and even in your ship's power-ups. While useful on their own, certain combinations complement each other so well that you can effortlessly advance dozens of levels and earn obscene amounts of points and lives. 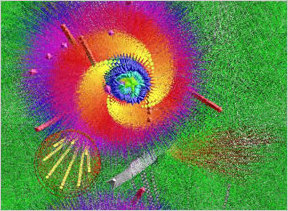 Ironically, SoC can be the most fun when it completely breaks down. When you're being flung from black hole to black hole too rapidly for the screen to keep up with your attract + attract + zap shield-powered-up ship, or when you've just cleared a level with homing + decay + beam and dozens of shots are hovering in space waiting for the next batch of aliens to spawn. These situations quickly lead to even more power-ups, and can perpetuate themselves for quite some time. McLeod calls this process "criticality" and claims to have hacks and patches all over his code to prevent it from occurring too frequently. It can be striking as the screen flares and the music crescendos in time with the game's escalating insanity.

As with the coin-ops that it is clearly inspired by, Spheres of Chaos can be played indefinitely with enough skill and luck. The simple rules quickly lead to a wide range of increasingly complex situations, although after level 100 or so you've probably seen most of what the game has to offer, such as the self-duplicating stick and flower fields, black holes in orbit around each other, the absurd and melodic mandala bosses, maybe even one of the top secret power-ups!

Unfortunately, due to its distinct style of using hundreds of thousands of independently moving pixels for many effects, still images simply don't do Spheres of Chaos justice; don't be fooled by the screenshot included here! Spheres of Chaos is gorgeous in motion, with extremely smooth animation (when played on a Pentium 3) amid literally hundreds of enemies and explosions (and up to 8 simultaneous players!). Far more than just a nostalgic tribute to Asteroids, SoC is a fascinating, unique and memorable classic in its own right.

This game is a trip, makes me wanna look at magic eye pic all day :)

I'm not sure I can get past the controls. They just aren't conducive to fancy flying or dodging it seems.

With all the free online games available I've never been tempted to to actually buy a game. Until now.

The usual here... Windows, Linux and no Mac. But it look so fun! Fortunately Steam Brigade should be coming out on Mac soon.

RaydenUni: Just reconfigure the controls then.

Have you ever tried Plasma Pong? It is even better, really fun game and free...

wow, this is a pretty fun game, I don't much like the controls (though I did not try changing them) but other than that it is pretty well done. The ships at the beginning were a bit annoying though, going over all the words in the menus, put me in the mindset to just play it in hopes that they would go away.

oh jeez this is so cool.

yeah, i thought of plasma pong when i played this too, but this is actually a lot better. the sound track of this is miles better, and although it's pixels instead of smooth smeary space-warping, this is just more visually interesting to me.

I like it. I wish the resolution were higher, but it's a fun game. I didn't like the controls at the beginning, but they grew on me. Best regular score on demo: 100K.

Here's a way to make it even more ridiculous: Set the difficulty to "Silly" and set the item rate to 19.9% (right click on it to decrease). Haha, watch the ridiculousness ensue. Best demo score on this mode: 1 Million!

Wow, finally beat hard mode. One of the most difficult video game experiences recently, no doubt! It took forever!

Here's a suggestion for a mode of play: set the regular enemies to "hordes" and set the item frequency to 0%. Even with bugs and black holes at None, this still provides a very honest, very tough game. Patience is the key!

play this and just shoot everything youll have a sesiure

oi if the controls are failing you (which i assure you, they ARE) set them to as follows: thrust: up arrow, brake: down arrow, rotate anticlockwise: left arrow, rotate clockwise: right arrow, fire: Lshift, hyperspace: Lctrl.

srs that makes it so easy. the game owns btw.

6,698 Views
7 Comments
chrpa— Jayisgames needs your help to continue providing quality content. Click for details Few months ago we played a nice little game by Seal Dog (WE N°319) and could be seen then that the dev is promising. It wasn't just...  ...