Sprouts Adventure is the latest in the increasingly long line of casual sim games made famous by Virtual Villagers, Totem Tribe, My Tribe, etc. This one separates itself from the pack by clearing away the bloat to leave a streamlined experience behind. Sprouts Adventure gives you a clear, goal-oriented simulation that meters out its rewards at a careful pace, ensuring you are never overwhelmed with choices and fully appreciate each new upgrade you get to use. 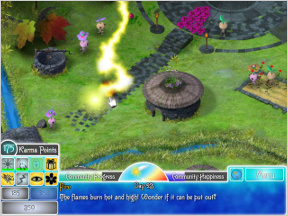 Sprouts Adventure is all about the little sprouts and their daily life of eating flowers, taking naps, and building things around their tiny village. As an unseen guardian, it's your job to make sure each sprout is well-fed and well-rested while pushing them to work on new buildings whenever possible. If a sprout gets hungry, drop him or her onto the garden patch and listen to them munch away. Sleepy sprouts need some time in the nap hut, while unmotivated/incurious sprouts could use a little recreation.

The game is paced by village improvements that become available one brainstorm at a time. With each new building you gain another tool that helps you keep your increasingly large flock of sprouts healthy. Beyond each critter's personal needs, your only concern is keeping as many workers hammering away at unfinished buildings as you can. The rest is up to the slow passage of time.

As the silent overseer, you have access to spells that can be used in several ways. Wind, for example, can perk a sleepy sprout up and give him or her a few extra minutes of awake time. But what would happen if you used wind on that kite? The sun spell helps your garden grow, but don't you think it would warm chilly things up, too? Spells are unlocked by collecting karma points gained from nabbing butterflies and stones that appear from time to time. Certain events also bestow karma points, so explore every inch of this little world and never pass up a chance to gain a few more!

Random items appear from time to time around the village, such as butterflies, clumps of flowers, and shiny stones. Simply drag a sprout to these items to collect them, netting that character a few curiosity/motivation points, some food, or better yet, karma points for you. 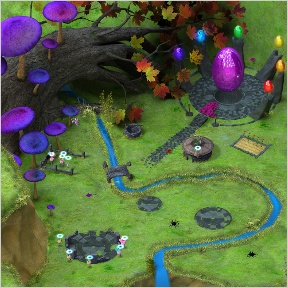 Analysis: At first glance, there isn't very much to do in Sprouts Adventure. It's a stark game, especially for the first few hours of play, but after an hour or two that starts to change. This simplicity forces you to do two things: investigate the world around you, and take frequent breaks. Sprouts Adventure is a casual game built for the casualest of casual players. Pick up and play, set it down and walk away, and don't worry about anything other than keeping your sprouts happy.

One of the most endearing parts of this game are the little easter eggs you uncover just by using your sprouts on different parts of the landscape or by playing around with spells. That bridge has one obvious function, but that doesn't mean there aren't recreational uses for it, too. Sprouts Adventure rewards inquisitive players who aren't afraid to play around with their game, and because there aren't any stats to manage or technology trees to fudge, you are more than encouraged to mess around with the world.

New discoveries, buildings and events are sparse, but that rarity makes them a prized commodity. You feel like you earn every spell, every structure, and every happy sprout, and once things get rolling halfway through the game, you'll have plenty of things to keep you busy. Sprouts Adventure is the simulation game for casual gamers who are serious about being casual.

Things on the Ground

Warning: Using Lightning, Rainbow and Earthquake spells make them stop everything they are doing, teaching, building, fishing, or working in the lab.

All of these will earn you one Karma point.

Once the observatory is built they will find Paradise Island, and the missing sprout elders. A crack will appear in the giant egg in the temple. Hit it with the lightning spell. They will use the shattered remains to build a balloon large enough to carry them to paradise island.

Thanks to GrinnyP for all her work writing pretty much this whole guide :D \o/

Things on the Ground

Warning: Using Lightning, Rainbow and Earthquake spells make them stop everything they are doing, teaching, building, fishing, or working in the lab.

All of these will earn you one Karma point.

Once the observatory is built they will find Paradise Island, and the missing sprout elders. A crack will appear in the giant egg in the temple. Hit it with the lightning spell. They will use the shattered remains to build a balloon large enough to carry them to paradise island.

Thanks to GrinnyP for all her work writing pretty much this whole guide :D \o/

Sorry, but having paid for the full game I can't really recommend it. I finished the whole thing in six hours, including all spells and inventions and the endgame. It doesn't warrant replay for me, so that's six hours mild amusement for $20: not really worth it. I've paid for and enjoyed many village sims and this is the first one I've felt like asking for my money back on.

I'll agree there's no replay value, but you don't consider six hours adequate game time? That's longer than many casual games out there. Not longer than village sims, but like I said in the review, this one aims to be a sim-lite game for the really, really casual player.

I have paid almost twenty dollars for myself and my long-suffering husband to go to the movies. That's two hours of dubious entertainment, counting the stale popcorn.

GIVE ME BACK MY MONEY, NICHOLAS CAGE.

I guess it depends on your point of view. I happily forked over twenty smackers for Penny Arcade Episode One when it first came out, and I think I finished it in less than four hours. I enjoyed it immensely, and consider it money well spent. Sprouts Adventure looks like the adorable love child of Pikmin and Black&White. I'll have to give the demo a try. (Which is always a good way to test the waters.)

Well i agree the game is a bit on the lighter side, it's a great way to introduce your kids into the village sim, before getting them into something more complex like virtual villagers. ;)

This is a GREAT game! Sure, it's milder than all the "Shoot, Stab & Slaughter" games, but it's good for a 'change'.

As far as the person that "says" he finished in 6 hours... You can "get it over with" as soon as possible if you want, but it sure won't be as enjoyable and memorable, as when you 'relax' and enjoy every... little... detail....

You can chug wine down and get a cheap buzz, or slowly sip it and get more pleasure than you could ever imagine!

Oh yeah, (I almost forgot..) Thanks John for the review and guide on this neat little game!
I've read several reviews on the Internet of "Sprouts Adventure", but your section here beats them ALL! ... Hands down!

While I had fun I have to agree the game was over too quickly for any real value out of it. If it was $5 I could see that it was worth it. I had thought once they sailed off in their balloon that we'd get to do more on the other island. Not so. I'm really disappointed in how quickly this game was over. I expect my SIM games to keep me involved for days until I finally get bored, put it on pause, and forget about it.

Could somebody tell me how to build a hut? No matter how long I play, I don't get this light bulb over sprout head. Later all my sprouts are really sleepy, because they have no place to sleep. Please, could somebody help me with this?
Please!

If the light bulb is not appearing drop your sprouts on the ball and allow them to play. This will cause their curiosity and motivation to increase. Eventually one of them should start showing a light bulb thought balloon. If the light bulb still does not show up, this may be a bug in the game. Contact the vendor where you purchased it to see if there is a fix.

Thank you grinnyp. I don't have full version, it was only trial one.
I tried this trick with a ball, but still nothing - even after 2 days. And after this time they just start to zzz... so I totally lost hope that any of them could have any bright idea.
Beside that I keep them full, motivated and curious. What is wrong? Do I still forget about something?

No, it sounds like you're doing everything right. You can try uninstalling and reinstalling the demo and see if that helps. Otherwise, contact the vendor. Even if it's a demo they may have a suggestion.

Thank you very much for your help. I'll try this :)

So, I finished the game except for the big question marks in the middlge of the Achievement and Discoveries screens. I figured that discovering/going to the island would be the final discovery/achievement, but when I looked at those screens from the main menu, the big questions marks were still there. Is there some secret discovery out there to find before you go to the new island?

This was a fun game, played here and there over the past few weeks. Not sure why all these people said the game was 20.00. I only paid 6.00, ive looked at a few sites, its between 6-9, guess it pays to search a bit and not be lazy? Anyway, great game, was a good 45min time waster here and there at work!