It's not every day you reach for a book on the bookshelf and find the laser of a sniper's rifle peeking over your shoulder. And that's a good thing, because that would probably turn a lot of people off to literature. But in Chris Hecker's recently-opened beta of SpyParty, you've got to take that chance and enjoy that book, because at a party of suspicious characters, you've got to use stealth and observation to trick the other player and win. While one player tries to act like the computer players without getting caught, the other tries to pick them out, in a sort of inverted Turing test. Even though SpyParty is unfinished, there's still a ton of tension as you pick up a book... and sneak the microfilm from the inside cover. 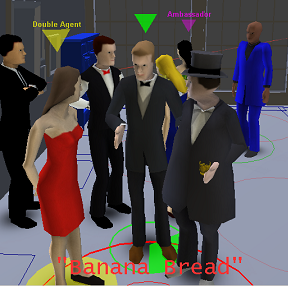 In each round of SpyParty, one player takes the role of the spy, who has to accomplish a series of four tasks in order to win, while trying to look like one of the computer-controlled AI characters. The tasks are relatively simple and subtle actions like swapping a statue or planting a bug on the ambassador, but each of these actions has a small tell which might give the player away if they're not careful. You can move around using [WASD] or the [arrow] keys while moving the camera with the mouse, and performing your espionage actions with a right-click. Advanced players can try their hand at triggering the animation in an action meter that could give them a more subtle tell if successful, or a more obvious one if not. The spy can do regular actions with a left-click (similar to the ones the AI do) to try to fool the sniper, but they still need to complete all of the required actions in order to win.

The other player is the sniper, whose goal is to observe the crowd of partygoers from the outside, identify the spy, and take them out with a single bullet. As the sniper, you know that the spy is the only character who will perform the tells associated with the tasks, but spotting who's doing them in a crowded room can be tough. The sniper can move around on a limited track with [A] and [D], but can also zoom in and out on the room with [A] and [S] or the scroll wheel, and highlight suspicious characters with a left-click (or lowlight them with right-click). Holding down [Shift] initiates the sniper's crosshairs, and a click pulls the trigger on (hopefully) the secret agent. 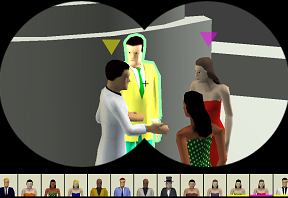 The spy wins if they can complete all of their tasks undetected, or if the sniper fires at the wrong person. The sniper wins by picking off the right partygoer, or if the spy runs out of time before completing their tasks. While the premise is simple, the result is an incredibly nerve-wracking atmosphere for both players, where you never know if you're making the right moves or not until the pull of the trigger.

Analysis: Did you remember to read the instruction manual and readme file before playing? The developer recommends you spend some time with the literature before you begin in order to understand some of the subtle nuances that can make or break a game. It might be a strange barrier for entry for new players, but having the extra knowledge and playing a couple of single-player practice rounds can make a huge difference. (After all, you wouldn't hire an untrained spy or sniper to do your bidding for you in real life... Not that you hire spies and snipers, right? ...Right?)

That said, when you start playing SpyParty, you're immediately immersed in an incredibly tense game of cat and mouse. As a spy, you might panic when the sniper's laser sight focuses on you right as you pick the book off a bookshelf. As a sniper, you might doubt your "sure thing" when you see them pick up a statue, but hear someone else mention "banana bread" across the room. Because there's so much going on in the room at any given time, both players are kept on edge as they don't know what the other knows. 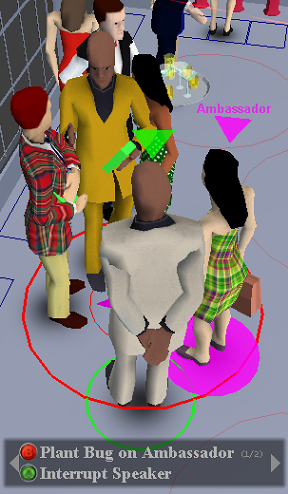 Even among such a tense atmosphere, there's still a friendly community surrounding the game. Players are encouraged to discuss the events of the game to help one another out. It also helps to switch up roles often, as what you learn playing spy can help you as a sniper, and vise versa. Though you may be tempted to glean wisdom from higher-level players (note the number of wins each player has in the lobby), you can get just as many (if not more) tips from a player of equal skill level.

As the game is still an open beta, the graphics are still minimalist and clunky, but you quickly forget about that when you're trying to scan the room for details that you can use to your advantage. Some of the levels and missions are still regarded as "experimental" and aren't necessarily balanced for fair play just yet, but they make for interesting grounds for seeing the expansive potential of the game. If you're looking for a competitive and thrilling challenge, grab a cocktail glass and join the party.

Note: As this is game is still in beta, it may be buggy and not function properly on some computers; play at your own risk. As of the time of publication of this review, PayPal is the only method of purchase accepted, though the developer plans to include more means in the future.

Windows:
Get the beta version