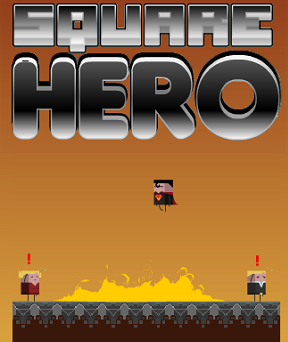 Dateline: Quadrilopolis. To the world at large, mild-mannered office worker Cube Kent seems to do nothing more than work at the office of Office Work Incorporated. However, due to a mysterious accident as a young lad involving a radioactive chemistry set, whenever there is a call for help, he need only to duck into a convenient telephone booth to become... Square Hero! NDGames' champion of justice, and puzzle platforming protagonist extraordinaire! He's here in his poly-bagged, holographic, foil-embossed varient-covered, action-packed first issue, and while it's not it's not going to win the Eisner in the innovation category, it's definitely a fun romp, true believers.

When in your mild-mannered form, you can only walk and jump with the [arrow keys]. However, make it to a phone booth and you gain access to your cache of superpowers. First of all, there is flight: a double-tap of the [up] key will have you take to the sky, and with a burst of speed given with a double-tap in the direction you wish to go. Since fire is a weakness, you'll need your super-breath, activated with [A]. Obstacles may block your path, but they can be dealt with with your [S]-activated heat vision, or else frozen with breath and punched through with [D]. Watch out for the green radiation of krippling rocks, though. Get hit with them, they'll force you back into your secret identity. Each level you'll be given tasks to complete by the hero league, usually involving the rescuing of civilians, extinguishing of fires, and catching of criminals. Complete all objectives to finish the level. Up, up and away!

Superhero games are notoriously hit-and-miss, particularly Superman-inspired ones. Still, Square Hero delivers with a game that emphasizes exploration and puzzle-solving. The pace may be too slow for those who prefer their heroes brawly and quippy, but the mechanics of super-powers are used in engaging and interesting ways. Also, the aesthetic is absolutely beautiful. It has the crisp shiny lines of silver age art deco, reminiscent of the style Pixar uses when displaying their CGI creations in 2D. Unfortunately, the game's use of the Comic Sans font clashes pretty horribly (and, lets face it, a font designed to mimic a comic-book, looking horrible in a game designed to do the same, is a special kind of fail). There are also quite a few minor, but annoying, visual glitches. Particularly there is the secret-identity "jumping" animation which disconcertingly. changes character models for a couple of frames. With this in mind, while Square Hero isn't particularly innovative, it has the creative bells and whistles that will keep you entertained till the climactic finale. Excelsior!

I ended up standing on the tiny exposed upper-left corner of the first block to be frozen+punched, and my man got stuck - then it warped to a completely black and empty room.

Guess it's programming school time for the authors of the superhero school game...

Cute game :) I've written a little review/critique here, but I don't want the devs to take it too seriously (if they're reading) as I tend to over analyze things and, most importantly, I haven't played through the whole thing :P Not exactly sure of what happened.. but I got a game over screen after rescuing a guy (time limit?)

Maybe I didn't give it enough time, but from what I played so far there was no puzzle at all, just linear levels.

Since there is no advantage in playing without the powers, the crystals are just like fire, you should avoid it. And when you can't avoid it, you know there is a segment of the level where you don't have to be super. So, in that context, the concept of acquiring/losing powers adds very little to the game. It's like playing a level of sonic and then a level of shinobi, instead of swapping abilities to solve a problem.

The double tap for boost got me in trouble several times (adjusting position prior a jump makes me boost to a hole, for example) and I haven't found a single use for it, so far.

Besides looking different, the metal and striped walls are essentially the same. Somewhat related, the use of heat vision is poorly explored. I've found only one exception: having to destroy a wall with heat vision before crossing a crystal. That situation gave meaning of existence to the heat vision, the two different walls and the crystals! If the rest of the game presents this kind of level design, the game is very badly represented by the first few levels.

I've done a bit of exploring, usually backtracking to a place where you've been without powers, and it usually leads to a place the level designer clearly didn't expect you to be.

Aaaand.. that's it for my lunch break :P

The game could do better it feels like there is a lot out of place:
First, why do you revert back when you pass a booth while your a super hero? It feels unnecessary due to the fact that you can't do much without powers.
Secondly, why do the box shards (when they explode) have collision, that explains the lag and why my player jiggles when he is in front of the box.
These are my only complaints, the game has potential and the intro was good.
Please also consider checkpoints and health pickups, or dying close to the end of the level could induce rage-quitting.

I got stuck twice and gave up. First on level one I was trapped above the playing area and couldn't get back down. Then after refreshing and having to do the tutorial again on level 2 I was transported up through the ceiling next to a green crystal. I couldn't get back through to become a superhero because I hadn't burned through yellow blocks to get there. Could've been fun...

I too am experiencing game play glitches, I can't even play the game, it starts with me in a black and empty room with nothing to do. I recommend pulling it until they get it sorted out. This is in FF on a WinXP machine.

[I can't reproduce the issue. I've tried with FF on Mac OS X and FF and IE on Windows 7. The game is running fine with no glitches at all. -Jay]

MelonFighter is right. Add in checkpoints! I got mostly through the first real level, fell in a pit since jumping is kinda clumsy, and was sent back to the beginning of the level. having to redo everything doesn't add anything to the game, it just wastes my time. Since I don't feel like wasting my time, I stopped playing. You should engage the player, not waste their time.

The game is fair. The mechanics grow tiresome after a short while. If you like games where you have to do annoying things to try to beat the clock, this is the game for you. If not there is still enough visual and concept appeal to play some levels.

Sadly, the entire time you play this game you will be thinking about how to craft a better superhero game. It is ingenious to incorporate super powers the way it has been done here. The next iteration should have better ways of using superpowers as this gets repetitive after one level.

I also believe this concept could go a lot further than merely having you beat the clock for medals. This premise begs for more focus on puzzles and less focus on accurate jumps. Give us a girl save, some baddies to bash, some cheesy dialogue and we will play the wheels off this game.

My glitch in level 2 happened again. There are 8 fires left and 8 left to rescue. Heading right to left there are 2 steel walls then a person to rescue then a yellow striped wall then steel wall. I was at the top when I punched the first frozen steel wall and the explosion shot me up through the ceiling. This is where I am stuck: http://i1192.photobucket.com/albums/aa326/stevenwithav/squarehero.jpg

I was using heat rays to dissolve a block, and when it exploded, it sent my square hero into a nearby hole in the maze with no exit. Mac OS X, FF.

Cute, but not cute enough to replay the entire level to get my hero out of the hole.

Haven't I heard that music before? I wanted to check the credits but since you can't access the menu while playing...
Nice idea, but problematic game play.

I didn't like the booths/kryptonite mechanics. Having your powers nullified while within kryptonite fields would have been alright, but reverting to mild-mannered form and then being required to find a booth to change again is annoying.

Huh. So it said "Fire is your weakness!" and then contact with water killed me.

Which put me off enough that the thought of having to go back and forth for another level to find a 'phone booth seemed like too much trouble. Shame, that.

@Jay - That you can't reproduce the issue I'm experiencing doesn't negate the fact that many of the comments in here so far are reporting game play glitches.

[I realize that. I'm not sure what to suggest at this point. -Jay]

@Jay - I don't know about everyone else, but for me, cookies always make everything better.

^_^ Thanks. I've written to the developers asking if an update will be coming.

In the meantime, I'll have to write that down in my journal of anecdotes that make the world a better place, along with everybody love everybody. :)

Pretty game but light on gameplay

Distinctly boring. Slow movement, fiddly controls, slippery walking, slow acceleration, overly large levels with overly large radius from the kryptonite blocks, and no puzzles at all that I found. It does indeed make me think all the way through about the ways it could have been better but wasn't.

I can't see any save, pause, or replay functions. The first two are important for long levels, and the third is important if you're going to assign medals.