In aptly named puzzle game Stacko, you're making stacks of colored disks to match the target shown each level. But things aren't as simple as just dropping these blocks on top of each other. Instead, they rest on a setup that matches Q*bert's home turf. Clicking on a level lower than the block will hop down to it. If the tile you click on has two blocks above it on either side, then the colored blocks will then stack, with the one on the left going first. All this has to be done within a certain number of moves. There is a tutorial that will help you understand... and then some. Despite the tutorial being a little on the long side, Kings Kollege's easy puzzle game will keep you entertained with 40 levels and 20 more only available on the free android app. Stacko may not have you burning your brain fuel dry but you'll sure to enjoy the easygoing feel of it all. 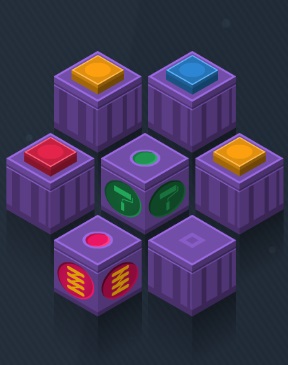 Much like Kings Kollege's other game, Hivex, Stacko is clean and colorful. It's also rather short as the levels are quick to go through. The difficulty is on the easy side, but there is talk of the additional level packs to come that will amp up the challenge. The only issue with the mobile app is it's kind of heavy with the ads. With a constant, but small banner on the bottom and a pop up ad every few levels, some will find this a major turn off. Thankfully, the browser edition doesn't include these ads, though you miss out on the new gaming mechanic introduced in the third level pack, which is color changing tiles. So if you don't mind letting developers get paid for making the game you're enjoying and don't have an issue waiting 2 or so seconds to push a 'x' on the ad, then the mobile app is a great addition. Otherwise, you can still enjoy the new twist in the second level pack of adding trampoline tiles to the mix and hope that when the app is updated perhaps the browser addition will be too. But for now enjoy the simple yet relaxing puzzler that Stacko is.