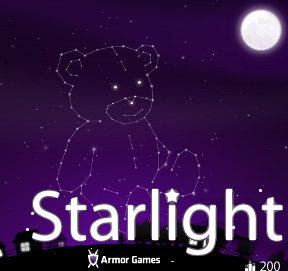 The game is played entirely with a mouse, which should be good news for those of you with trackpads. As you move the cursor, the stars in the sky shift position and move to follow it, gradually bringing the picture hidden into shape. It's a matter of slowly moving your cursor around the screen until the image snaps into focus. Think of it like a Magic Eye book, but without all the headaches and "Oh, yeah, I totally see it" lies to your friends. We know you've done it.

Because the controls are so simple, Starlight is easy enough for nearly anyone to pick up and play. The game offers three modes for you to play, two of which are on timers, but arguably one of the best ways to enjoy the game is to simply take your time and ignore your score. Who needs points when the sky's the limit? 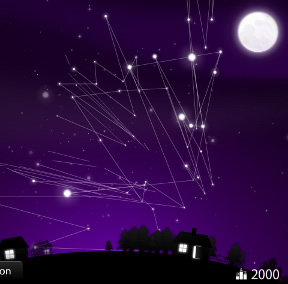 Analysis: It's not often that I'm delighted by something. Well, okay, yeah, it is me we're talking about, and admittedly twitching bits of string or shiny balls of foil have a way of capturing my attention. But it's not often that I'm genuinely surprised by a game, and Starlight did just that. Maybe I've been subjected to too many samey shooters, too many painful point-and-clicks. But when that teddy-bear popped into focus? I admit it, I squealed a little. What's wonderful about Starlight is how drastically different it is from most of the other games coming out these days.

You remember that one special Sir David Attenborough did on the electronics aisle? Me either. Which is why it can be a little disappointing to be marveling at how beautiful everything is, and to start to reflect on the wonder of nature, and then suddenly be presented with... a cellphone or television set. On the one hand, I understand; you need objects that are instantly identifiable with fairly simple shapes and clean lines to make the game work. On the other hand... well, it hardly ruins the game, but it's a bit of a misstep in an otherwise silky smooth presentation, and I wish the theme had been a bit more cohesive.

But, oh, what a presentation it is. I can forgive the occasional pop culture icon when a game is as delightful as this one. The soft music, the luminescent colours... The game has a total of 64 levels, which sounds like a lot, but you'll likely sail through them. The difficulty scale is pretty much non-existent, which may be a disappointment to people looking for a challenge, but if you're just looking for something to unwind with at the end of the day, then look no further.

Simple and charming, Starlight is a welcome change from anything else available right now. While it may not offer much depth or difficulty, it's undeniably beautiful, and I would love to see the original idea expanded upon in the future with a little more challenge. But as it stands? For those of us who could use a touch of wonder in our days, Starlight is a nice respite.

There are now 64 levels, 5 new ones since you wrote the review... and for those looking for a challenge, the Timer mode is now quite challenging (initially it was not).

Ehhh kind of a less pretty, less musical version of Coign of Vantage. I didn't like this one very much.

pretty easy once you get the trick:

The pictures are always 2D, focusing on the x and z position of the stars, y axis just there to mess with your mind.

All of the configurations have clear "front or back" and "sides"... front/back faces are where the "vertices" are. Sides are where you can clearly see the lines linking the stars looking like scribbles.

So the purpose is to find an orientation so you're looking straight at the "front".

The "front" I find to be always more bunched up than the "back". The back sorta sprays out.

It was fun at first, but got boring quickly.

It seemed like the solutions to most of the levels were to move your mouse to the left, and then adjust slightly.

I would like this about ten times more if there wasn't that white-screen flash when things lined up. It'd be more rewarding to see everything come together.

It's really good (and impressive for flash) as it is already, though!

That was the easiest game I've played in months. Nice presentation, though.

turn it about until the stars point towards you.

I like it. There aren't enough thoughtful, relaxing games anymore. I did easy, because I wanted to enjoy the game rather than fight to get the best score. I would like to see harder puzzles with more complex pictures.

This would be MUCH more fun if the dang game didn't treat the player like a toddler. As soon as you get close to the solution some kind of gravity well takes over and finishes up the last little tweaking for you then *FLASH!* in your face - Look! Here's the finished picture you idiot!

Let ME fine tune the thing. No, I don't want to pixel hunt for the exact spot for perfection but neither do I want the teacher to come along and guide the crayon back inside the lines.

Using the mouse is frustrating. This game lasted about 3 minutes for me!

The controls for the mouse are really ... annoying.

@Regy Rusty, that's exactly what I thought, except I couldn't remember Coin of Vantage's name. That game was fun at first. While this one is charming, it feels like a rip-off.

Yeah seconded. When the grouping of stars gets larger, the game screen is no longer large enough to smoothly allow mouse movements

Just a note: the added time per level on Pro is 2 seconds, not the 4 seconds stated in the mode's help screen.

Oh wow... another two notes (I missed these the first couple times):
1. After the fourth level, the actual picture is randomized (no one gets the exact same order)

Good premise, but way too easy. When it's out of position and looking like a bunch of lines, the lines will converge toward one direction - just rotate so that you're looking from that direction, tweak until it doesn't look ragged, and you've got the picture.

It could be made harder-than-trivial by either omitting the lines between stars, or making sure that there are many lines which go between widely-separated (from the picture perspective) stars, to reduce the convergence effect.

Very pretty, but the whole timed thing is pointless when it's so painfully easy to get the picture right. It kind of snaps together once you close in on a certain range. In fact, even in the non-timed version, I would've rather been able to slowly maneuver the stars until they were exactly right, instead of "close enough" It takes away a bit of the magic on the ones where I basically won by accident while following one particular star around its rotation.

That is really very pleasant. Thank you for the game.

I enjoyed it, but I think they lost a lot of variability by having the next button in the bottom right. Because of that, the picture is only resolvable in the top-half or bottom left sections.

For my (very fast) play through, I think I only had solutions in about a third of the usable space. This made finding a solution very easy, because you just check bottom-left, top-left, top-right. Usually the picture cleans up pretty quickly in those three areas.

But, I personally like the insta-solve thing, where it grabs it when you get close. I hate twitching around a tiny point trying to get it just right.

The gravity-well effect has more to do with perspective than anything explicitly programmed, I think.

There were no moments where I felt that it was frustrating or hard. It was quite easy, but pleasantly so for me. I enjoyed listening to the music and just snapping the pictures together. The levels went by very quickly, and though it was easy, I enjoyed it a lot. Very soothing and calming for me, not a lot of thinking involved. :)

good game. but why exactly do game creators like teddy bears?

I enjoy this game but I play a few levels at a time and would like to resume later but even tho it says resume I cant. I have to start all over again. Does anyone know how to start where you left off. I really don't want to play all 64 levels at one time.Other then that its really enjoyable to me. Thank you.

Nice one Dora :)
Makes a nice change from pixel-hunting and platforming, and it was great to see John Lennon and Audrey Hepburn up there.

Taking a look at someone's earlier post about being ranked first on "easy", and based on the fact that I also had the highest score of the day, does everyone get the same score (12,800) for beating it on the untimed difficulty? Or am I just awesome?

I had to stop after a few levels in because the flash at the end of each level hurt my eyes. Other than that, it was fun.

Is there a way to pause the game so we don't have to finish it all at one time?

The solution tag ruins it. What's the point of rotating the object when the game tells you exactly where to put the cursor? I went to medium and hard mode trying to see if the solution tag would disappear, and it didn't.

[Edit: The solution tag does go away after about the 3rd screen. It looks like you may have quit too soon. -Jay]

The pictures, so far, are:

I love this. I personally think they should have a level Editor! That would make the game absolutely ACE! Also, am I the only one that thinks the Justice Music Video of DVNO inspired this game?

Here is the music Video.

I did not know you could not use links. Sorry, I am new to this site, although I have used it for a while I have never felt the need to comment until now, so I made an account. For the admins, please remove the link in my comment above. Apologies, I did not see the rules for commenting before I commented, and I don't know how to edit my comments.

Oh, I agree with Dora! It's charming and delightful. How nice.

does anyone know where i can download the music to this game?