Remember Yuri Shapkin and Vladislav Kim's adorable and clever stealth puzzle platformer Stealth Bound? You know, the game that proved stealth could be silly and wasn't the sole domain of broody masked guys lurking on rainy roof tops? Well, they're back with the Stealth Bound Level Pack which, as you might have cunningly deduced, is a pack of levels based on the original game. Using [WASD] or the [arrow] keys to move, climb, and jump, with [Z] or [L] to interact, your goal in each level is to slip past any guards or defenses and make it to the exit once you flip the switch to open the door. As before, there are blocks to be dragged and keycards to be gathered, and while you can knock out some guards temporarily, security in heavier gear can't be tangled with, so you'll need to hide from them. Make it through as fast as you can with all three stars for the highest score. Sound easy? Well, let's throw in banana peels. Chewing gum. Security cameras. Moving platforms. Laser fields. 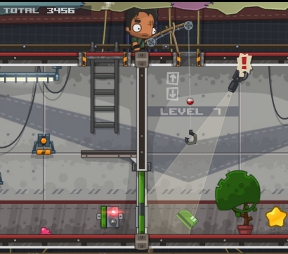 A big part of what made Stealth Bound such a hit was its style and sense of humour, and happily the Level Pack keeps both intact. It looks great, with its expressive little characters and cartoon flair, and the levels hold a lot of cute surprises. You'll have to find disguises in a few areas, deal with noisy floors, come up with creative ways to get security keys... it makes the game stand out from more serious titles in the genre with a sense of whimsy and fun design. At the same time, however, the controls are still not as responsive as they could be, which makes levels that require more timing or platforming frustrating, and some elements like the chewing gum and banana peels wear out their welcome and become annoyances rather than adding to the challenge. As far as gameplay mechanics go, this Level Pack doesn't offer anything that really shakes it up over the original, but its focus on keeping its levels as inventive throughout and tightly designed as the first makes up for it. If you wanted more juggling, more dumpsters, more prat falls and zombies, the Stealth Bound Level Pack will provide, and make fans out of anyone looking for a stealth game that doesn't take itself or the genre too seriously... or, um, seriously at all.

You press Z or L. :) Those are the only keys you ever use to interact. I believe the game should display the keys over the prompt as well.

Thanks Dora. I figured that bit out, but apparently I'm still not patient enough for the response in the controls.