Late one night by the side of a dark road, you come across a sobbing little girl who you decide to escort home. The girl's name is Cat, and she doesn't seem to speak much, but when you chase after her to retrieve the scarf you leant her on the walk home, you discover that's the least strange thing about her. In Fridge Games' surreal indie horror adventure game Stray Cat Crossing, things take a turn for the weird when you find yourself trapped inside Cat's house. Doll-faced gentlemen. Baby-faced dogs. Winding hallways, disturbing nurseries, chattering nutcrackers, bandaged children... and that's just for starters. Use the [arrow] keys to move, hold left [shift] to run, and [ESC] or [X] to open the menu, with the [spacebar] or [Z] to interact. To save your game, find the little child wearing bandages and they'll snap your photo. The more you explore, the stranger things become, and you'll have to think outside the box if you want to find a way out. With gorgeous hand-drawn pixel-art, and a stellar moody soundtrack, Stray Cat Crossing is as unnerving as it is captivating, and delivers a gorgeously otherworldly adventure with a bittersweet story, though perhaps one a little heavily reliant on style and symbolism, and possessed of some annoying repetitive puzzles. 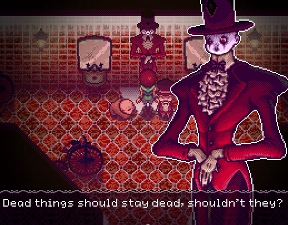 Stray Cat Crossing's gameplay focuses on exploration and unraveling the dream-like logic of the puzzles you're faced with. The house you find yourself trapped in follows its own rules, requiring you to carefully hunt down clues and hidden secrets, and its denizens often do the same. Few people are willing to help you out of the goodness of their heart, so you'll often need to do them favours or perform tasks in order to proceed. Don't worry, it's not all fetch-quests, and some, like navigating your way through a maze that shifts behind your back, are pretty darn clever. While there's very little given in the way of hints, when you're stuck, it's usually because you missed examining something you should have. I spent a long time going in tiny, angry circles in the beginning of the garden, for instance, because I didn't realize that there was a pathway obscured by the big tree. The section of gameplay taking place in the Attic might be the most frustrating, largely because it requires you to replay scenes over and over and over until you figure out the correct things to do and say, and the order to do them in. If you get stuck, which is likely given the way you need to give so many items to so many people at different times, it feels punishing and obnoxious, likewise the puzzle after that involves telling a character the right phrases or risk resetting a long conversation chain, though it is arguably the act that explains the most about the story. 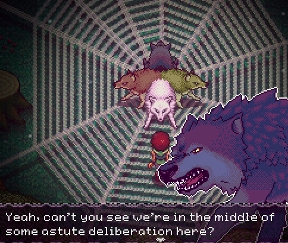 It goes without saying that Stray Cat Crossing is an absolute stunner of a game, one that goes above and beyond the level of detail typically found in pixel games to craft stunning characters and scenery. Every piece of the presentation feels carefully chosen, from the sound effects to the fantastic soundtrack that's at once both beautiful and discordant, and it's hard not to get sucked in to playing the whole thing in a single sitting. It may have a jumpscare or two (at most), but more than anything else, Stray Cat Crossing is mesmerizing in an unsettling way without relying on a lot of gore or violence to shock. To say its plot is perplexing at first go is an understatement, since it likes to throw increasingly bizarre situations and scenery at you. It claims inspiration from everything from Ib and The Witch's House to Pan's Labyrinth, Spirited Away, Alice in Wonderland, and even The Nightmare Before Christmas. While these influences are easy to spot both in style and gameplay, Stray Cat Crossing still feels like its own beast. It may be a little too reliant on symbolism and metaphor, since neither the heroine nor any other characters ever really develop any sort of personality and exist solely to move you from scene to scene rather than endear themselves.

Which isn't to say that the story behind it all isn't a solid one, and once Stray Cat Crossing starts putting the pieces together, realizing what happened and what all the imagery is for is a little heartwrenching. While there are some scary moments, Stray Cat Crossing is more surreal and sad than anything else, and is about forgiving yourself and moving on. The end credits scene is actually a little perplexing given the prior build up, and I'm not honestly sure whether its intended to say something about the truth of the previous scenes or imply a sequel, and your interpretation drastically changes the ending tone. At around two hours at the outside for length, it's a short game, though one that doesn't waste time. Despite some ups and downs with its gameplay, Stray Cat Crossing is a beautifully creepy and imaginative little game with an incredibly creative design. If you like horror with genuine heart behind it that knows sometimes the scariest thing is simply facing up to something, Stray Cat Crossing is smart, sweet, and well worth your time.

This game has mastered the combination of both charming and creepy on a whole new level. While it's not as scary as other titles like Witches house, Ib, Ao oni, the Crooked man, ect. it still manages to be greatly eerie and beckons you to venture further down into the rabbit hole. It's a visually stunning rpgmaker game, from what I assume, would be an unfathomable amount of effort that went into the smallest of details.

Having played hundreds of RPGmaker games, this is easily amidst my top 10