[Please Note: Streets of Rogue is currently free while the game is in its Alpha stage. The game will require a fee to play upon release. This review reflects the game's current free Alpha state.]

Things feeling a bit... samey lately? Matt Dabrowski's new action roguelike — free while in Alpha release — will put that right! Rather than your standard dungeon crawl, Streets of Rogue is set in a bustling urban area teeming with folks going about their business, much of it nefarious! Besides the usual assortment of shopkeepers and item merchants you'll find scientists performing experiments on gorillas, rival teams of gangs, security personnel on patrol guarding private complexes with some very useful items, and public venues that include armed-to-the-teeth guards and some alluring safes in the back room if you can get to them and find a way to open them. 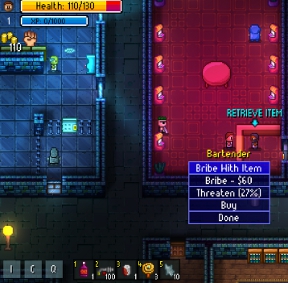 Each level provides three mandatory and rewarding Missions you'll need to complete to advance, but there's usually someone around with an optional Mission and additional rewards. How you accomplish your objectives will be entirely up to you and what sort of character you've chosen: Will you be a hacker, remotely opening security doors and triggering gas vents? A gangbanger who can call his friends for backup and go on the offensive? A rogue scientist armed with a gizmo that can make you an unstoppable giant, and a bona fide Shrink Ray to cut your opponents down to size? An amiable bartender who can gladhand his way through peoples' businesses and homes on pure charisma? How about a hyperintelligent gorilla lab escapee, amassing a chimp liberation army? It's all up to you, the equipment you've got, and what character class you've picked! With ten classes available as this review goes to press, each with their own special abilities and standard items, and forty coming in the full release, the choice is all yours in this procedurally-generated realm of mayhem where no two games ever play the same way.

Besides the dazzling array of gizmos available (Hypno-rays? Hologramatic Bigfoot projections?) and the crisp, colorful graphics and animation, what sets this one apart is sense of freedom and exploration; you're provided with missions to retrieve an item or release a slave for example, but just how you go about it in this fully-destructable environment is entirely up to you. You can hack into the restraining devices if you have the skills or equipment, but you can also attack the guards. Or save enough money to buy the slave yourself and then set them free. Movement is a customizable combination of [WASD] with the keyboard and the mouse to target, [TAB] brings up your missions and map, [Q] your inventory and [E] activates most things — despite what the game currently tells you — but the rest is up to you.

The impermenance Streets of Rogue provides lets you try out play styles you ordinarily wouldn't; players who'd normally prefer hack-and-sneak character classes get a chance to find out how the other half lives. Complete (or flub!) your required missions on a level and you'll be able to access the next whenever you're ready, but clever players often find it worth sticking around to raid various non-mission items, and nab the experience gains for their misadventures while they're at it. If your character gains enough experience to level up you'll be presented with options for some alluring new abilities between floors and you'll get to pick one of them. The game keeps things interesting throughout; you'll never know if that new floor you reach is going to be normal, or have something unique going on there like a giant laser-shooting robot chasing you around, bombs dropping from above, or periodic blasts of radiation you'll want to make sure to get inside the nearest building to avoid (and which the occupants will usually take extreme exception to!). There's always something new and with the unusual feature that lets you send the developer feedback from right within the game itself, there can only be more of the same. It's not often that we find games in Alpha release that are this developed, stable and thrilling, and it's clear that Matt is only just getting started. We can hardly wait.

Has potential but it doesn't have much depth. I need to play again and see how char traits from leveling up help but it always boiled down to a hack 'n' slash fest for me as I always seemed to run outta "items" if I wanted to try to be sneaky. I couldn't seem to make enough gold to keep my inventory going.

AKA boiled down to fight until you run outta ammo/grenades etc. Then punch shit until you die.