Can we use the phrase "high octane" without also referencing monster truck events in the same sentence? If so, we would officially like to add that to our description of Super Mole Escape, a new upgrade-fueled arcade game from Grumpyface Studios and Adult Swim. Playing as one of seven characters (most of which have to be unlocked to use), your job is to tilt your iOS device back and forth to swim through the dirt and escape the mole cops. Bustin' out of prison isn't always as easy as getting a poster of Rita Hayworth and a small rock hammer, you know. 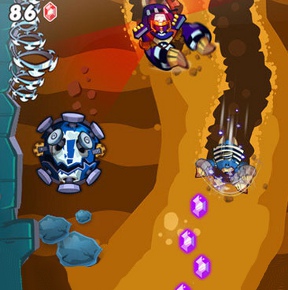 Super Mole Escape is built around the same idea as Jetpack Joyride. Once you pick a character and start digging, your job is to go as far as you can, collecting gems and avoiding anything that might slow you down (or eat you). At some point you'll make a mistake and the cops will nab you, ending the run and allowing you to tally your gems and upgrade your character or buy more power-ups. There are also achievement-style missions to complete each time you start digging, such as collecting certain amounts of gems or performing other neat-o feats.

Where that "high octane" stuff kicks in is when you start grabbing groups of gems for speed boosts, then chain them together for crazy cool dashes. Not only that, various power-ups give you some more speed, and you can even get things like an epic drill suit that lets you, well, do some epic drilling. Combined with all of the other dangers down below, you'll find there are plenty of things to keep your attention as you play level after level of this game, hoping you'll finally earn enough gems to make something of yourself!

Super Mole Escape keeps it simple but isn't afraid to pour on the attitude. There's even a multiplayer mode to extend the octane-ness as well as some optional in-app purchases to speed up the gem collection. A lot of fun from a little game, and definitely one of those mobile titles that keeps you hooked for weeks on end!