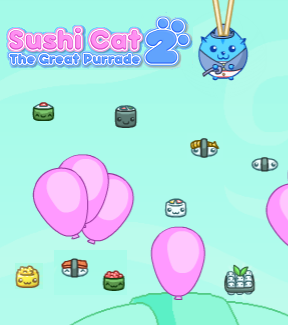 Everybody loves a parade, especially Sushi Cat! The floats! The food! The music! The food! The games! And, of course, the food! But when Wife Cat gets lost midst the bustling crowd, Sushi Cat knows it won't be easy to find his pink lady love amongst the cotton candy, parade balloons, and other squishy critters. But he'll find her, even if it means eating all the shari, nori and neta in the county! Sushi Cat 2: The Great Purrade is a new set of levels in Joey Betz's popular pachinko arcade game series, and it will leave you :3-ing.

Use the mouse to indicate where you wish to drop Sushi Cat, then click to release him. He'll bounce around the screen collecting sushi and power-ups before landing it one of the bonus point buckets at the bottom. Also, you should flail your hands wildly at the screen in order to coax Sushi Cat to move in one direction or another, while swearing under your breath every time he heads left instead of right when there was only one sushi left right there, dangit! (Okay, maybe that's just a personal strategy). Completing each level requires you to eat a certain number of sushi, indicated by the gauge on the left. Any more over the required means bonus points for Sushi Cat. Each level also has a single piece of bonus sushi which will activate a power-up or minigame that'll help your sushi collection. Finally, three pieces of gold sushi appear in each level. Though they don't add to your required total, collecting them will unlock various alternate costumes. Finish all 20 levels, and save Wife Cat!

Play all the Sushi Cat games:

By what is surely the purest of coincidences, Sushi Cat 2: The Great Purrade timed its release to coincide with the upcoming debut of Sushi Cat Plushes offered in the Armor Games store. That said, the little bit of unsubtle shilling herein is easy to forgive since A. The game is another high-quality entry in a high-quality series and B. Those things are probably gonna be adorable. The parade setting makes for some inspired pachinko level designs, filled with balloons, performers, decorations and flags. Also, like always, the new power-ups are gloriously surreal, with the Whack-A-Sumo minigame being a oddly charming standout. (That said, while it would probably be disappointing if it didn't make an appearance, we've probably hit the limit on the number of Nyan Cat cameos we're going to tolerate in our casual gaming releases. C'mon guys. That thing is so 2011.) All in all, Sushi Cat 2: The Great Purrade is a pack of awesomeness that won't need any wasabi to blow your mind.

I dunno, the cats have gone from slightly rubbery to water balloons with outfits. I feel like it's sacrificed some of its pachinko strategy for pachinko dizzyness, and the obese feline angle doesn't figure into gameplay at all. It's more like getting the bonuses to do the work for you.

I wish they'd make Sushi Cat 2 for iOS; the first two played great on my iPod.

It has a cute story and is enough minutes of amusement to keep you occupied. I played this back a while ago, though, so I forgot how most of it went.

The two levels with those little manually (catually?)-rotated squares took me more tries than the entire rest of the game put together, and they weren't even that fun.

Aside from that, though, great game, I loved the references to other games and memes. The Nyan Cat powerup was awesome, and reminded me of the Nyandeemer mod for Unreal Tournament 3.

I love the Sushi Cat games! Mine was too fat on level 14 and got stuck on a square, so I had to restart. Is the music in this Purrade the same as in Sushi Cat 2, or am I having audio deja vu?

Can someone help me get the three golden sushis from the last real level?

OH MY GLOB! BEST GAME EVER.

2,096 Views
2 Comments
chrpa— Jayisgames needs your help to continue providing quality content. Click for details Welcome to Mobile Monday! The first game is from a new developer (Toshihiko Ono) - new to JIG - and although it's a nice Christmas game, it's...  ...

How to Use Custom Tracks in Beat Saber

The 4 Best Tomb Raider Releases in the Last Decade

486 Views
1 Comment
jayisgames.com— Since 1996, Tomb Raider has become a pop culture icon and is heralded as one of the most successful video game franchises in the UK....  ...

4,591 Views
0 Comments
chrpa— Jayisgames needs your help to continue providing quality content. Click for details Welcome to the Roundup 61 - Retro with four games! After you find the ten monkeys in the chapter, look in the inventory. You will find a...  ...