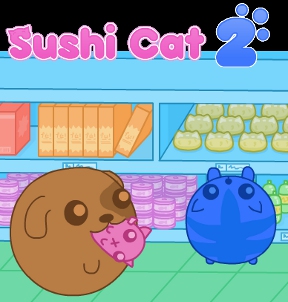 Is there any problem that gaining weight won't solve? Not in the world of Sushi Cat, the adorable little butterball (or is that mochi-ball) who has delighted audiences in two pachinko games so far. In the original, he met his true love; in the level pack, he had to defend their honeymoon from various tropical mishaps. Now, in Sushi Cat 2, Joey Betz presents another thrilling chapter in this epic romance: rescuing the pink kitty from her diabolical bacon-snarfing puppy kidnapper! Yes, the stakes are high, but with a little "om nom nom," you can tip the scales in your favor.

True to its gambling machine roots, Sushi Cat 2 depends a lot on luck. In many rounds, after using the [arrow] keys to scroll the play area and clicking to release your cat, all you can do until he drops into one of the score baskets at the bottom is grit your teeth and watch. Sure, emotionally it may feel better to say things like "Go left! Left! No, the other left! Nooooooo!" as he bounces around, but I'm afraid that doesn't have any actual effect on the outcome. There is one special piece of sushi per level that, when hit, will give you another chance to affect the game directly. For example, the soy sauce bomb can be placed anywhere on the field, and when it explodes, all the sushi pieces it sprays will fly into the cat's mouth. Often, these special pieces are the only way to grab pieces that are blocked off from the normal play area.

On the left hand side of the screen you'll see just how full Sushi Cat's belly has gotten, and on the right you'll see the number of total sushi left, as well as toggles for quality and sound, a restart button, and a fast forward button. If you don't grab enough pieces to fill Sushi Cat's belly, you'll have to restart the level, but there's no other penalty. In Sushi Cat 2, every normal level has three pieces of Golden Sushi. They don't count towards the belly filling total, but you can collect all 60 to unlock outfits for Sushi Cat (two of which are more like alternate characters). There are also five bonus levels which usually involve zero effort and maximum return, more like demonstrations of just how fat that cat can get than actual challenges. 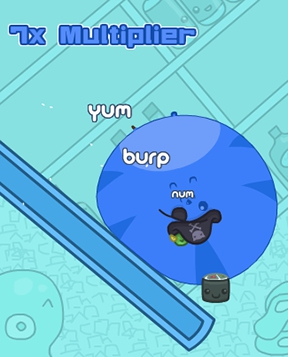 Analysis: Sushi Cat 2 has the same bright, happy JIMP art and deft Joey Betz coding as the previous two, so it's a little sad that they couldn't get DJ Cutman, whose "Run to Japan" had me tapping my toes through all of 2010, to write a new song for this game. The new music is not as catchy and much more repetitive. I actually ended up getting sick of it and muting it, and since the music and sounds are controlled by only one button, that meant losing all the other sound effects too.

I forgive the game for everything, though, because of the animations. They are even more hilarious this time out, with some little throwaway gags for the sharp-eyed viewer, like a movie theater playing "Raging Bacon" and "Bacon Instinct" (and check out the movie stars in the film credits).

The levels this time around are often taller than the screen. At the beginning of the level, you get a slow bottom-up pan, and you can use the arrow keys to check things out for yourself, but once you click to release the cat, the screen scrolling automatically follows the bouncing ball-shaped feline. With the soy sauce bomb and supermarket sweep sushi, you can use the arrow keys again to scroll if necessary. For some reason not only doesn't the dragon punch sushi let the player use the arrow keys to scroll through the whole playing field, but the screen actually narrows around the cat while you're aiming. I guess this is to give it a 60s martial arts flick feel, but if you've forgotten which piece of golden sushi you haven't picked up yet, it can be frustrating.

Brimming with kawaii details and addictive gameplay whose minor flaws don't detract from its overall fun, Sushi Cat 2 is bound to make you feel better about loosening your belt the next time you down a few too many nigiri. I for one am going an all-you-can-eat sushi places the next chance I get. Hey, if someone tries to steal my love, I need to be ready.

full belly achieved!
fat cat!
love this funny little game, but I completely agree with the review - shame about the rubbish music.

I loved the first edition of this game, and I was so excited to play this one. But when I click new game and it gives me the option to start a new game, it won't let me click yes :(

I think I found a bug. On the one with the pinball flippers I managed to hit the poor cat so hard that it got stuck on the beam above the flipper (it looked like it had actually been impaled) and wouldn't come off!

@ jim in Oz: Don't worry, the cat's ok!
Mine had also been thourally squashed a few times, but it came back, meaner than ever! :-)

Agree with other comments, Music is not bad, but it was better..

@jim_in_oz: I ran into that bug a few times myself. I thought that the cats skin had somehow gotten caught on the beam or something.

I think this one is actually a bit easier in general. There are a few challenging stages, but overall I didn't find it very hard at all.

I love cats! I love sushi! I love Sushi Cat! I hope there will be more helpings!

Ah well, it's usually not too long until Kongregate puts a mirror up. Looks fun, I can't wait to play it.

Fun stuff all around. I found the music okay, catchy, probably not as good as the original's. One thing I wonder about the unlockable costumes:

Is the "Famous Elephant" supposed to be a reference to a certain jmtb02, perhaps?

I have to say, it is loading very slowly, and running ridiculously slowly even at the lowest quality. I know I have updated flash, and scripts enabled so I guess I should just wait for kongregate as well?

For me, Sushi Cat's charming, addictive fun has always been the perfect blend of character animations, story, and whimsical music. I had to turn off the sound half-way through and found myself fast-forwarding through a lot of the game just to find out the ending. This music might work with a motion picture epic adventure, but certainly not with a sushi-eating, blue cartoon cat. Although the animations and story were as delightful as ever, the music kind of spoiled the game for me.

I've been playing Sushi Cat 2 for about a week straight. I just find it so amazing! 8D And all you people who hate the music... Just wow.
In my opinion the music was one of the best parts for me. Sure, it WAS repetitive, i'll give you that, and maybe the sushi-eating did get repetitive, but I've completed it FULLY,I've seen the happy look on Sushi Cat's face in the end and I'm still playing it. This will be one of my favourite online games to remember.