Swarm Gold is an update to, and replacement for, the original Swarm created by Reflexive Entertainment back in 1998. 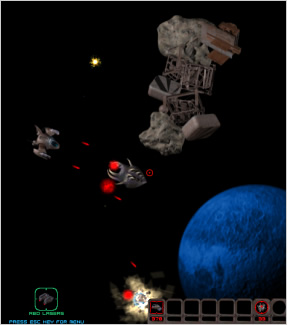 The new Swarm Gold features an impressive emulated 3D graphics system and realistic sound. You have free range to fly around the entire map just as we've seen in many modern top-down shooters. The subtle storyline is that you're a convict in the distant future, offered a pardon if you can successfully pilot your T77 Assault Craft through the galaxy and collect your quota of EZT, a precious energy resource. A hostile, insectoid-like alien presence was discovered to be working toward the same goal, which is why the government is recruiting felons to fly these suicide runs. The role of the pilot reminds me a lot of Duke Nukem, because of the scruffy, tough-guy voice acting heard in-game.

The most notable aspect of Swarm Gold that's evident right out of the starting gate is the smooth control system, something that's rare even among modern top-down space shooters. Trying to control a ship's boosters, direction, guns and more always proved to be a chore on a PC keyboard. Many games have tried many different approaches, but I can't remember playing one more intuitive than Swarm Gold. You control the ship's direction by using the mouse, which rotates a directional reticule in front of your ship. Thrusters are controlled with [space], and you simply fire guns with the first and second mouse buttons.

Each level you zone in via a "jump gate," a wormhole-like mechanic that drops you off in each sector of the galaxy. Each level presents you with a quota of EZT to collect, which you can find either by looking at the minimap radar, or by following a pretty cool HUD-system that surrounds your ship, pointing you to both resources and bad guys. There's a special blue icon that shows you the direction of the nearest EZT, and a red one to warn you about the nearest enemy. Both are easily integrated into the mouse-reticule system in a way that makes navigating your ship a breeze. The space bar activates your thrusters just as you're probably used to seeing in many other top-down space shooters; the best method controlled by moderate-to-short taps, using momentum to fly around moreso than the actual thrusters themselves. The weapons are equally as simple to control; a left mouse click fires your blasters and the right mouse button ejects a mine. 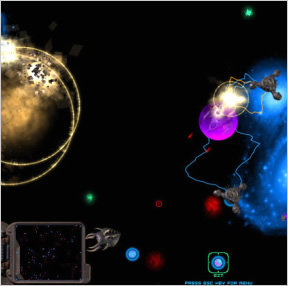 The variety of weapons isn't huge, but it's pretty adequate for a game this size. You start out with gold blasters, which get the job done in early levels, but are weak compared to the red blasters you'll gain access to in the first few levels, and the cool spread lasers and quad-lasers you'll get later. These are all picked up floating around in space, either on their own or available after blowing up enemies or asteroids/space junk. The mines are a particularly cool weapon, because they can be used both defensively and offensively. If a group of enemy ships is chasing you from behind, you can slow down a bit, drop one, and watch as everything within it's blast radius is destroyed. You can also drop one just as you're approaching a group of enemies or asteroids, flip around the other direction and let inertia carry the mine straight into the enemies. All your weapons and mines can be tracked in your inventory in the lower-right corner of the screen. All but your starter gold blasters are finite, so you'll constantly need to be picking up weapons, mines and shields as you're flying around. Your shields are obviously finite as well, and once you've run out, your ship is destroyed (unless you're playing on the easiest difficulty setting). Although you're presented with lots of extra ships (lives) to pick up, there's a pretty big death penalty; you lose all of your blasters and most of your mines if you die.

Analysis: Both stylistically and in gameplay, Swarm Gold succeeds as a strong winner. Its intuitive control system lets you focus more on playing the game than controlling your ship, which isn't the case with many top-down space shooters I've played over the years. Between sets of levels, you'll be given "bonus" levels to pick up as many power-ups as you can within a minute or so, and there's also the occasional "death" levels where you're goal isn't to collect EZT, but to destroy a certain number of enemy ships. These are both visually indicated by purple and red backgrounds, respectively. There's also a few more weapons to be found, including the uber-powerful "Star Clubber" with can be found once per level in later stages. For more info, you can check out the tips page here.

Unfortunately the replay factor isn't as prominent as some fans might hope, but there is a nice collection of increasingly more powerful enemies and weapons as levels progress. Over 100 levels in all, your initial run will keep you busy for a few hours at least. The graphics and sound are very well-designed for a download game produced by a distribution company, although you might catch a block-like distortion every once in awhile in particles, such as when a ship is destroyed. Space shooter fans will definitely want to check the demo out, but I think any action/arcade fan in general would like this game. It has a certain uniqueness about it, even though it's a played-out genre.

I'm pretty sure this was based off Reflexive's original Swarm game, not Brent Silby's.

Man, there are way too many games called Swarm these days. It's confusing.

As for Swarm Gold...has this been out for a while? I could swear I remember playing the whole 'fetch the EZT' thing before, and the style of that debris in the screenshot looks very familiar. :-/

Swarm Gold is a cool game, although I wish there were more weapons.

Yes, the original Swarm is by the same company that created this one, Reflexive. I've updated the review accordingly.

I love this game, I have ever since it first came out, I wish I could find my old copy of it. I don't see any difference between this and the original, other than the level select looks different. I can't figure out how to change the weapons which is pretty annoying. I don't want to waste my cluster missiles on the things that die in 1 hit of a red laser, but thats my only complaint.

Hmmmm. Did the original game ever get released under the name 'Galactic Swarm' from a company name 'Camaj'? If so, then I know why it seems familiar--I picked up Galactic Swarm from Target's $1 section a while back (I want to say last Xmas? Can't remember exactly).

And...a check on Moby Games tells me that 'Galactic Swarm' is indeed the game. Cool.

how do you change weapons??