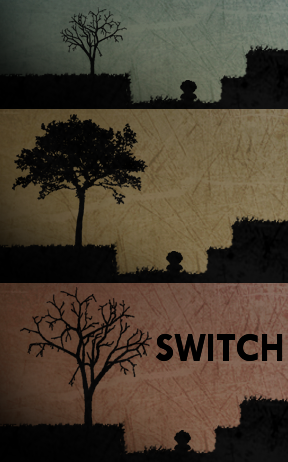 To quote the Buddha, "Do not dwell in the past, do not dream of the future. Concentrate the mind on the present moment." Well, you'll have to ignore that advice if you want to make any progress in Switch, a puzzle platformer by Scott Addelsee, Jemma Barnard, Kate Fierek, and Tom Saunders. About 2/3s of the game will have to be spent in the past or the future, actually. You see, in each level, using the [arrow] keys, you must find three keys, one each in the past, the present, and the future, then take them to the exit door. To do so, you'll switch between the three eras with [Z], [X] and [C], respectively. A bridge unfinished in the present may be complete in the future. Likewise, a currently empty pedestal might have had a key on it in the past. Be warned: You have a limited number of "switches". Trial and error will be in play.

Though it was made in Flixel, Switch doesn't feel like it. In fact, it might be best described as what Sonic CD would play like, if it was made by the designers of LIMBO. The moody atmosphere and spooky aesthetic are Switch's strongest feature, from the eerie serenity of the past, to the disjointed present, to the vaguely totalitarian future. While the temporal puzzles are cleverly designed, the limits on "switching" unfortunately get in the way. Having to plot your moves certainly adds to the challenge, but the player should be allowed to explore such an effective setting to their heart's content. Not every game is improved by a medal system. Also, the jump physics are, in a word, wonky. If you can look beyond these issues, though, Switch has neat ideas behind it, and is well worth a chunk of your time.

Oh, and here's the fastest possible solutions to the three first levels if you're going for the gold medals:

This is charming, but, as you point out, has one considerable flaw, and I'm not sure it's worth mustering up the patience to play any further than the first couple levels.

Having a limited number of switches without any way to preview what the other two time-periods will show is like blind leaps of faith in a platformer with strictly limited lives. If they're interested in including that sort of challenge, it would have made a lot more sense to simply reward a medal for finishing under a certain number of time switches, or -- even better -- include some method of seeing the ghostly outlines of the future and past while standing in the present. At a minimum, the keys should probably show up as outlines in the 'wrong' time-periods.

As things stand, the current choices makes what might be a charming puzzle game into a chore of trial and error and memorization.

But I'm only chiming in here because the game seems so promising, so should the author's come across this, I hope they take it as suggestions for an updated version.

As an afterthought, I wonder if there's some consistent relationship between past, present, and future that, once understood, would make these complaints moot?

While initially off-putting, I quickly realized that the limited switches are what make this game. Any dissatisfaction I felt stemmed from the idea that I should be able to beat any puzzle on the first try, through cleverness and careful observation. That is simply not the case here; you WILL restart, and more than once, in the process of beating these levels... coming to terms with this is part of the challenge!

I believe any "shadowing" of the other time periods would ruin this game, by eliminating any semblance of challenge. I strongly believe that, handled well, discovery through repetition is still a viable game mechanic despite the overwhelming desire for immediate gratification in today's world.

On a somewhat related note...

Are there only 3 levels?

After successfully completing level 3, my only option was "menu," but when looking at the levels list, the layout suggests there should be at least 7 more...?

so I am guessing that is it.

'nobody' nailed it. Having to randomly use limited switches to keyhunt while offering no clues otherwise to where they might be really isn't fun. It just becomes and exercise in trial and error.

I hope this game's designers use this to make a better game, with more levels and not limited switches.

I actually liked the trial and error bit of it! I thought the platforming itself wasn't done well, and I really didn't like not being sure where I could and couldn't actually jump to, but trial and error actually seemed to be the point.

Are there more than three levels? I've beaten all of them with gold medals, but it's still not giving me any more.

Oh, and here's the fastest possible solutions to the three first levels if you're going for the gold medals:

I think it is quite nice. The graphic and mood are attractive, but the game control is quite annoying. I totally agree that the whole limited switches thing is the biggest problem.

I liked the limited switches, to me it was a major part of the challenge and is integral to the game as it stands especially with the game being so short.

Without the limited switching there would be no challenge left at all!

This is the most well executed take on this mechanic I've seen, but it still has these two flaws: It's waaay too short and you can't change things in the past to affect the future. Hopefully there's a sequel or update.