Everyone knows the number one medieval training "must have" is a scarecrow dummy, and it's 100% true that the more dapper they look, the better you'll train. That's why Sir Scarecrow is the best training dummy ever with his trusty monocle, tight bow tie, and sharp looking top hat... you'll never get better training anywhere else. It could also be because he's a sentient being stuffed full of more tips than he has straw. He's your perfect guide for fighting your way through Swords and Souls. "A talking, fighting scarecrow?" you think. "Sign me up!" But wait! There's more! Not only is SoulGame Studio's game an Duck Life-like RPG, there are also secret medals, an incremental twist, and handful of minigames all there to make this one of the most fun death arenas around. 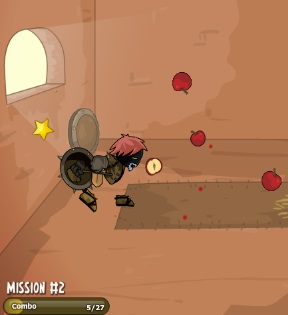 Swords and Souls' main goal is for you to beat all the levels in the arena, and there are a lot to go through. To be the best you need to be you need to train your skills, which is done by playing minigames which, while increasing your skills, also let you unlock achievements and gain experience. These minigames use either the mouse or the keyboard [arrow] keys and test your reflex skills. They all vary enough that when you become tired of one, switching to another is refreshing instead of a chore. You can also do them as long as you want, which lets you stay in rhythm even if you make major mistakes. Training is also where the real leveling up occurred. In the arena, while you do get experience from the battles, it's more about the money you collect. Fighting is pretty easy as your character auto attacks. You can be more involved with the special moves you unlock as you level, potions to buff you, and spells to do major damage to your foes. You'll also need to keep an eye on the battle screen to jump in when you hit a critical attack, so you can do extra damage if you click at the right time.

As you can tell, there is a lot going on in this game, and I haven't even touched on the museum. That is one of the great things about Swords and Souls... there is so much going on, but all of it ties in together. In the museum, all your awards and achievements are put on display, and the more you have, the more people pay to visit. You can go and collect your earnings at any time, giving this game an incremental element to it. It also gives achievements more of a victory that just a "Hurrah I did it." The other part that I really like about this RPG is, in battles you don't have to be around the same level as your opponent to know you can win. Instead of just making sure you have the biggest weapon and the biggest number by your name, you can actually win by being tactical with your skills and spells. This keeps things from falling into the same pattern of training till you reach a certain point, and then going to hack and slash. Add in the hidden achievements you have to look for, and your house you're building that increases how much money you are earning, and you got yourself one heck of a game. It's like a full course meal, where if one thing becomes too bland, you can switch to another side dish for a bit. All of it works so well together it makes other games not only look bad, but feel bad about themselves. So find yourself a friend full of hay and become the best gladiator in all of the land.

Love me some upgrades... minigames are fun (mostly) as well.

You mean you didn't find the secret piles of copper and titanium?

Thanks for the catch. Should be fixed now. ;)

I love everything about this game! Fun graphics, very satisfying sound effects, medal, and upgrades! When will the sequel be out?

Escape from the Restroom - Restaurant Edition

5,479 Views
3 Comments
chrpa— Jayisgames needs your help to continue providing quality content. Click for details In a popular Neat Escape's restaurant you went to the restroom, and stayed there. Not voluntarily. You order is being prepared, you're hungry and thirsty but you can't...  ...

2,250 Views
0 Comments
chrpa— Jayisgames needs your help to continue providing quality content. Click for details Welcome to Weekday Puzzle! This week we've got three puzzlers. In a Sokoban-like puzzler by Rob Alvarez (rob1221) you need to create a path of light through...  ...

2,500 Views
23 Comments
chrpa— Jayisgames needs your help to continue providing quality content. Click for details Welcome to the newest Weekday Escape! At the beginning we have a double post by Selfdefiant, escapes from Minnesota and Louisiana - I'm posting the games in...  ...

4,412 Views
5 Comments
chrpa— Jayisgames needs your help to continue providing quality content. Click for details Welcome to Mobile Monday! The first comes an adventure escape from a pyramid by playPLANT (LIBERTY PLANT Inc.) and it's an exciting one - the pyramid collapses...  ...