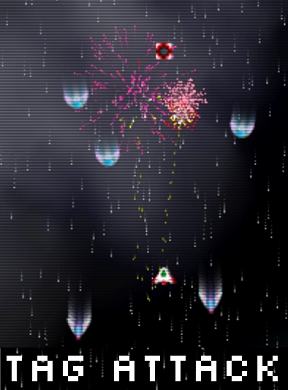 Shooter fans! Has this ever happened to you? You're trying to enjoy blasting the latest wave of Galaga-inspired retro-baddies, but find that the old-school chiptune music and sound effects are drowned out by the relentless sounds of mouse clicking and space-bar tapping. There has to be a better way to launch a space bullet, right? Well, Devilish Games has heard your concerns, and the result is Tag Attack: a shooter that focuses more on the aiming than the clicking, while not sacrificing the intensity of the genre.

Tag Attack is played entirely with the mouse. Your ship follows the mouse back and forth at the bottom of the screen. Hover the mouse crosshairs over incoming alien ships "tags" them, launching a seeker missile to destroy them. Crashing into an alien ship, or being hit by one of its missiles depletes your shield.. Various power-ups are available, including bombs (activated with a mouse click) that clear the screen, aimers that increase the area of your tag-crosshairs for a short while, and repair spheres that bolster your shields. Lose all of your shield and its game over, man.

Tag Attack is a visual delight, crammed with colorful nebulas, pixilated explosions, and swooping starfields. Sometimes the play-screen does get too busy and tiring on the eyes, but it really does feel like fighting your way through a low-rez galactic war zone. The unique control scheme takes a little getting used to (though the opening levels are nothing if not too-forgiving), but once gotten the hang of, it makes for an interesting shift. It allows for a little more of a strategy focus: rather than just trying to fill the screen with as many bullets as possible (which, admittedly, is my typical shooter plan of attack), one must balance avoidance, aiming and item collection in each wave.

Tag Attack is probably a little too repetitious to waste hours on at a time, but I find I keep coming back looking for an ever-higher score. It's easy to jump right in and gets surprisingly intense in the later levels. Could this be the start of a new genre of casual shooters?

Great idea, but way too easy. I tried learning patterns, but I get the impression that just randomly tagging enemies works just as well because of the low difficulty.

Granted, and the over-easy opening is its greatest flaw. Round about level five, though, it gets medieval.

This is a neat concept but I wish I could start from level 4 or 5 or so. It was great fun the first time, but then the first levels are too easy to wade through again. I might have been more motivated to try and beat my own high score if I could see it. Since I didn't make the top 100, the "Hall of fame" doesn't seem to record my other attempts.

Ditto what everyone else said-- it went from boring to very challenging in one wave, and if I could have started from that wave I'd probably have played a dozen times instead of once.

You might try to avoid shooting the asteroids at all ( or only shoot the big ones ) as the enemy ships can crash into them, saving you some work when the screen is crowded :-)