Black Olive Games' newest point-and-click adventure series begins with Tainted Olive: Chapter 1, where you take control of Silvian. Silvian's mood has been bleak lately and his luck only seems to go from bad to worse when he runs afoul of the local thieves guild, who, as it happens, don't take kindly to people trying to run out on their debts. A job posted by the local church to investigate the sudden silence at one of their heavily guarded orchards seems like a good idea, both in terms of cash and an excuse to get out of town for a while, but before he can leave, he has some unfinished business to attend to. To play, all you need to do is click to interact anywhere your cursor highlights with a white glow, and the map you gain early on will let you travel from place to place. Friend, this is one maudlin game, so hopefully you're in the mood for some bleakness and some sad doo-doo-doo music. 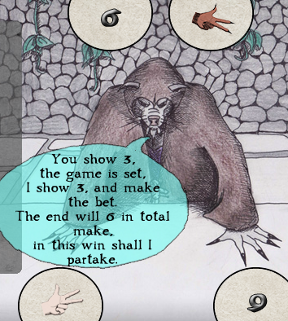 Though the story is extremely text-heavy, your actual choices are fairly limited and so are any actual puzzles. The game does some clever things with its puzzles, but they stutter somewhat from poor explanations or awkward interfaces. This first chapter of a planned six part series shoulders the burden of introducing us to a new world, one vastly different from The Grey Rainbow. A lot of it is interesting, like the Blood, the Five Hundred Year War, and the importance of olives, but not everyone will appreciate the jarring breaks to the story the narrative often takes to infodump it in your lap. If you can stand the bumps, however, Tainted Olive is a curiously engrossing game that feels like it has the potential to open up into an even more creative world. The risks it takes with its puzzle design might make it seem rough around the edges, but they stand out from the pack. Chapter 1 itself is on the short side, and don't expect to finish with more answers than questions, but the series shows a lot of promise, and later this year we'll see if it can continue the momentum.

Thank you for the great review, Dora! If you don't mind me asking, what puzzles specifically (when talking about poor design choices) were you referring to?

Hi dev! It's not so much poor design choices as simply awkward explanations combined with the interface. Specifically,

the box puzzle. It isn't immediately clear that you can only rotate pieces when they're locked into place, or even that you can rotate them at all, and I thought I was encountering bugs when I couldn't swap or rotate tiles. Similarly, the Ratman's puzzle explanation was a little awkward to follow because the narration was so heavy on linguistic style and the initial encounter with the way that interface was presented seemed even more confusing as a result.

In both cases, after some experimenting I figured out what to do, but while I understand wanting to make puzzles where figuring out what to do is part of it, it just seemed like the mechanics were presented oddly enough that the transition wasn't as smooth as it could have been, so it took me out of the story.

Ah yes, I agree about Mora being somewhat confusing in the beginning. I was thinking of maybe putting in visual help at first, an example of playing Mora - but finally decided it would break immersion. So I counted on players figuring it out on their own. I think it was a good decision, but I also know it could have gone much smoother - suffice to say, if we ever encounter the game again (IF!), in the following chapters, it'll be more user friendly.
I also agree on the peacock puzzle, a bit. The problem was that visually it did not convey enough info. There should have been slight visual hints as to what was possible. But then again, put yourself in Silvian's shoes, receiving a strange puzzle box for the first time; of course it takes some time to master. Explanation after the fact, however, does not make me any less guilty.

I always listen to quality advice ;) So, by Chapter 2 we will have ironed out there little problems. And created new ones on the way :D

Anyway, if you pay careful attention to the menu screen, and to the dialogues, you may find many, many foreshadowings (several dozen) of events in future installments.

I understood what you were trying to accomplish with the ambiguity, just as I said, the way it was handled and presented made me initially think I was encountering bugs rather than solving a puzzle. :)

Should I be stuck in the mini-game?

I keep winning, but there doesn't seem to be an endgame to this round. It's round 2, with the gem.

Aha, partly my fault. But it did lock up on me a few times. Reloaded and it worked fine.

The ratman game makes no sense at all, I have no idea how it works or how to win even WITH the gem.

on the mini game i swapped the pieces correctly, then i rotated them so that the phrases come up, but when i try to click and drag it won't move. help.

@Paul: They should! Once the verses appear (all FIVE of them), they will flash yellow once, and then they can be moved. You can drag them up and down.

If it doesn't work, then try reloading your game, or using a different browser. That might be the problem, although I haven't encountered it with anyone yet.

I missed the stick at the well. Is there any way to proceed without it or is there a way to revisit the well?

@kevman, you can go back to any place on the map, so revisiting the well should be a simple matter of opening the map and going there.

As for the puzzles, I actually liked that you had to figure them out. I kept going back to the girl in the peacock puzzle and finding out I wasn't finished. It didn't take me out of the game at all.

As for the Mora puzzle, that was clever. Simple as it was to beat, I haven't seen anything like that before, and that is what made it worth playing for me. Please don't add more information, unless you do it as a conversation choice AFTER the player has at least tried the puzzle once without help. Otherwise, all the fun will be lost!

@dsrtrosy: Don't worry! We won't be dumbing anything down. But Dora was right on some points, namely - Mora needed a final layer of polish. The "practice" button was unnecessary surplus and I don't think anyone ever used it to great extent. But we got scared just before the game was finished, and we added it in just-in-case the game was too difficult.

I had this problem before - I reloaded the game and then was able to move the text.

You need to speak to the Ratman and ask him about the Blacksmith's hammer. Then the well become a clickable location on the map.

Belatedly, since I arrived here based on chapter 2, but: I actually appreciated (and used) the "practice" button in the Mora game. (I figured the main game would never actually let me forfeit my soul if I lost, but why risk it?)

Realizing that, even when the gem's insights became cloudier, it was always possible to at least tie each round, was one of those nice "aha!" moments.

Favorite line of the game:

"On second thought, it might not have been a good idea to put the lobster in your pockets. How'd you manage to do it, anyway?" LOL