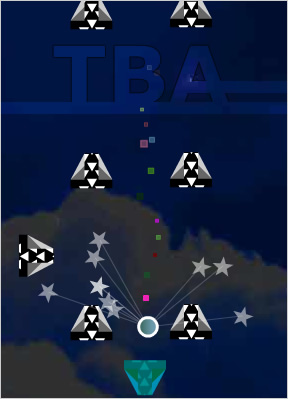 To be announced? Text-based adventure? Television Bureau of Advertisement?

TBA, from game developer John Cooney (jmtb02.com), is none of these things. But what it is... is a whole lot of fun.

At first glance, TBA appears to be of a game of extreme simplicity. As you blast through the first level of this arcade action game, doing nothing but striking the space bar until the ball flies into the goal, you may wonder "What's the point?" But don't let any first impression fool you. Once you get going, the game really shows it's true colors.

The goal of TBA is simple. Get the ball from the start of the level to the goal by blasting it from launcher to launcher with a simple tap of the [space bar]. Simple, right? Just keep tapping until the ball hits the goal, right? The trick comes when these launchers start moving, spinning, and flipping. When you discover the precise timing required to actually get the ball from launcher to launcher, you will begin to see the true depth of the gameplay.

From the first launch to the last, you'll have a blast. The game sets an additional layer of depth with the inclusion of "par" times. These times serve as passive goals — if you want to go for par, go for it, but if you don't, you don't have to. For those of you who like having good scores, this will add a good amount of replay. The graphics in-game are both pleasant and informative — every type of launcher having a different color. For example, the goal is red, blue launchers don't move, the ones that do move side-to-side are turquoise, etc.

The visual effect that strikes me most is the natural progression of time. A sky background is visible throughout each level, and, as the level goes on, the color of the sky rapidly changes from pleasant blue to red to purple, simulating the passing of the day. This effect is far from subtle — the entire spectrum of colors can be seen in only a few seconds.

The sound and music, while not outstanding, are on par with what you would expect from a jmtb02 game. An upbeat techno loop populates the levels while the level select has a much calmer, quieter loop. The sound effects, however, are virtually nonexistent. The only one I heard during gameplay was the sound of the ball re-spawning back at the start.

One nice design feature is the fact that you can play any of the game's 25 levels in any order you wish. If you get stuck in this game, it's okay, because you can just move onto the next level and worry about the one you were stuck on later.

Analysis: TBA is pure, simple fun. While it's not going to last you more than a few hours, those few hours will be well-spent. The game itself is easy to pick-up and is well-designed, starting with a basic mechanic and sprinkling in variety every few levels. And it is built on a solid "beat your score" replay base. Thanks to its short levels and auto-saves, this game is great for a lunch break, between classes, or any time you can spend a few minutes on the computer.

And, on top of all this praise, what may be most impressive is the fact the entire game was written in just four days.

Catchy game. I was able to beat par on 8 of the levels on the first try. Reminds me of the shooting barrels in Donkey Kong Country for Super Nintendo.

Very nice. The beauty of the casual games biz is that people get their new ideas out to a large audience.

My eyes, me eyes are bleeding!

So what does TBA stand for? Throw Ball Again?

Here is a cheat that I discovered:

If you hit r (to restart the level) right as you reach the goal, you beat the level with a score of one second.

Yep, to be anounced. Or The Ball Adiction. Or, The Best A...amazingness! um... never mind. This is such a fun game. It's trully hard to find a way to improve it. Um... sound effects? I love the little extras - makes games like Fancypants FUN. Little randomly generated "did you know?"s, those stars swinging around the ball, that techno music - and did you notice that cool loading bar? WHeee!

Awesome game, definitely reminiscent of Donkey Kong barrels. A little disappointed that I didn't get anything for 100% completion though =\

When I saw TBA in my Google Reader, it sounded interesting. So I went to the JIG link and read Griff's excellent review. It sounded reeeal interesting. But when I saw the references to Donkey Kong barrels by TTT and Jamus, I knew I just had to play it. That's what makes JIG the best game site around. Between the handy tools to keep notified, the articulate reviewers and the JIG community taking the time to leave comments, everything integrates perfectly!

Those of you Googlers who haven't looked into iGoogle are missing some neat JIG tools. The Google Reader can give you up to the minute notice of new JIG game additions. And the JIG gadget puts 20 recommended games at your finger tips for quick picking! Go to http://www.google.com/ig for more info.

Zeke, I'd like to discuss hiring you as my marketing representative. :)

Thanks Griff for the great review!

The title "TBA" originated from when I posted on my homepage about a game I was making, with the title TBA (To Be Announced). Sadly, half the people who visited my site mistaken this to be the finalized title, so they started to refer to it as TBA. It stuck, and there we have it!

Jay - Have your people email my people and work out the details :-)

i wish you could turn off the music

Excellent game, really addictive... gave me motion sickness after a while, I had to go throw up. But that's not a criticism! I like that in a game.

Did you try right-clicking Sloth?

Oh god! Just as I always suspected! When the game is loading,

TBA stands for 'Transitional Ball Arhetype'. look on the bottom of the TBA++ sign as it loads!(i know you were desperately needing that)