Gather your tools and find a comfortable chair, Terraria has rolled onto iPhone and iPad! The universal app ported by 505 Games shrinks sandbox adventure world found in the downloadable version of the game, rearranging the menus and grafting a couple of virtual joysticks onto the screen. It looks, feels and plays just like the original, and even with its few missing features, it's a solid port of Terraria through and through. 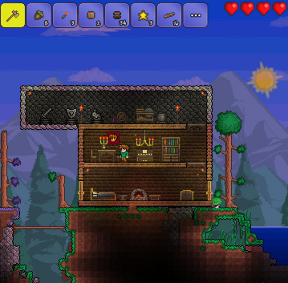 The gist of Terraria is this: you're in a massive 2D world stocked with breakable blocks and hidden treasures. All you have to do is explore, craft and create. You can mine ores and use them to make armor, weapons and tools, then head deeper into the environments to discover many more surprises. Oh, and survival is a thing, too, seeing as how Terraria is swarming with creatures, including a handful of bosses that will give your combat skills a run for your gold.

The controls are likely one of the biggest points of curiosity for any Terraria fan looking for portability. The iOS version does a great job translating physical buttons to the touch screen. It's not perfect, but it definitely works. There are two virtual joysticks to use, the left one allowing for movement/jumping, and the right to control the direction of your currently equipped item, be that a pickaxe, weapon, block, and so on. There's also the option of tapping the block you want to interact with. Combined with the zoom feature, this latter method often works best, though your mileage may vary. 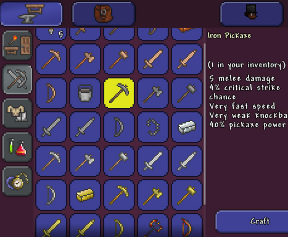 Analysis: Terraria is a big, open game that perfectly blends sandbox creativity with an old fashioned adventure. It gained a reputation as a 2D Minecraft, but it's a very different experience once you look past the basic descriptions. Combat, crafting and exploration are king in Terraria, and the more you discover the more you can do. Floating island or subway tunnel to the dungeon, anyone?

Here's the biggest bummer for Terraria iOS: no multiplayer. This world of green grass, hidden ores and pesky skeletons is for your eyeballs alone. It's unknown if this feature is being worked on or if it's just not possible, but it makes things feel kind of lonely from time to time. Not everyone prefers Terraria with friends, of course, so if you don't mind being the only adventurer on the block, this really isn't much of an issue.

Apart from the lack of co-op play, Terraria for iOS is an absolutely stunning port. Featuring well over 200 recipes in a redesigned crafting menu, two dozen block types, 75 monsters, half a dozen bosses and a dozen biomes to survey, you won't run out of things to do for quite awhile. Terraria fans will probably already have bought the game, but anyone looking for a great sandbox adventure on their iPhone or iPad would do well to pick this one up.

No Android, no purchase. Sorry.

I'm sure you won't mind waiting a little then since the Android version is already on its way. :)

Oooh, I don't mind waiting at all! Just knowing it's on its way is more than enough for me. I'm playing the same waiting game for Ice Breaker.

Thanks for the info, Dora!

I was convinced the Android version was coming out first, but oh well. I'm most interested in that one, too!

It seems to have been released on Android today! I don't suppose it'd be too much to ask for a repost?

Yep, it has! Links above updated. I usually post mobile-related news on Mobile Mondays, so look for the announcement there.

This might be the updated link for the android version https://play.google.com/store/apps/details?id=com.and.games505.TerrariaPaid&hl=en