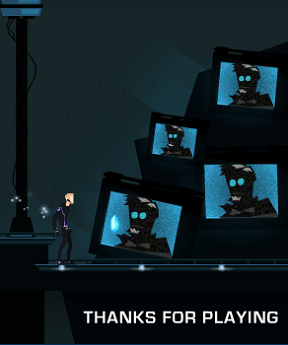 So, in conclusion, Thanks For Playing is a wonderful bit of high-concept fun that all platform fans should enjoy backing through... Oh wait, I think I just started with the ending there. Well, it should be no surprise, since I just made it to the beginning of Thanks For Playing, an interesting little puzzle platformer developed by Alkemi Games at the Utopialis 2012 Game Jam. It starts with you arriving just a second too late from preventing a mad scientist from perfecting his time reversal device. Now, with the flow of reality well and truly in reverse, the only thing you can hope for it to keep yourself alive by untracing your steps into his laboratory and avoiding trapping yourself in a paradox. Saying any more would spoil the beginning.

Move and jump with the [arrow] keys. However, since time is going backwards, you must clear each screen using typical platform mechanics that would occur if the clock was ticking the right way. You'll be able to leap up huge heights (since before it would be a fall), but dropping too far will short out the time stream (since before, you could never jump that high!) Your score starts at 2030, and you lose points for every monster you resurrect and coin you disperse. It becomes important to look for the visual cues of your surroundings: the streak of sparkles that indicate a place where you collected a coin, the bits of crumpled scenery where a collapsible platform once hung above. Make it back to the start and, well, you'll get to see actual name of the game on the title screen! Other games have used this kind of gimmick as a central conceit, but not quite to this extent. The thing that comes closest is Mushroom Engine. Still, Thanks For Playing's utilization of the reversal theme in both story and directly in gameplay makes for a unique kind of storytelling fusion. Taking about ten minutes to play through, it is a work that manages that proper balance of exploring a clever concept without belaboring the point. So, once again, in conclusion, Thanks For Playing is a wonderful bit of high-concept fun that all platform fans should enjoy backing through.

Play Thanks For Playing

The lowest score I've started with is a measly ten points. Not sure how.

Umm.. any help on the screen with the three ascending (descending) columns? I get to the top and there is nowhere to jump that I notice... The fall kills me.. Help?

Try to think what the Agent did when he arrived on this screen, to take all coins (knowing he didn't go back on his track after taking them).

Just visualise his path and then.... follow it in reverse!

to jump (unfall) up the rightmost edge of the top one. It's a high unfall spot just like a cliff edge would be.

Also there are clues to the environment in each level.

The rubble piles on the ground at the start of each level will become platforms, and the agent will sparkle near gems that haven't been taken yet.

I'm disappointed in the ending, though. I was hoping for a ending like in the similar game

where we could see the game

played in the other direction.

This is freaking brilliant! a rare 5 stars from me.

Think I found a glitch. The one level with platforms near where the game actually begins...I failed it. Then it played in reverse for me.


Ah, welcome my lovely agent, please make yourself at home....
But I'm afraid your too late.

Erase this time, erase this reality....
This is the true purpose of the retroactiveator.

Helen...The look in her eyes when you brought her before me....
And then the electricity started.

Yes, yes. I'll always have to remember I watched her die.....
My god, I have been laughing and crying ever since then.

You waste your time. I will never work for you again!
Even if I must die before. Even if everyone must die!

I am free now, but I remember jail...
and it was hell!

Guess who is too late to stop me now?...
The answer is: you!

Wonderful, the reactor is working, agent.
We will see each other at the origins
Beware the paradoxes! AH!AH!AH!

And the name of the game is:

The Last hope of Doctor Zeit.

I still can't get past the level with the 3 platforms. I did try to jump at the last one, but it doesn't make it? Help?

For that last platform you need to have your back to it under the left side as though you had just jumped off of that side. Then jump and right to get onto the platform and back down the other 2

Great...went back to the game and it didn't save progress. Why can't all games save your progress?

Regardless, what I dislike the most about this game is how you just seem to die for no apparent reason. I'm running along and suddenly just zzzzzap, I'm fried. Yeah, yeah, I know read the context clues, but I guess its just my way of thinking... they really don't make a lot of sense. In turn, I just find myself frustrated playing. I'll find a walkthrough on Youtube so I can watch the thing unfold and see what I missed.

How in the world do you do the "Impossible Sequence Complete" level?

Is there any difference in the two 'beginnings' besides the screen saying whether you did or didn't get your score down to zero? The perfect run screen hints at something more, but I'm not sure if I'm supposed to take that seriously.

There is no difference, it just congratulates you for a perfect run.

Up jump the first pillar.

Jump onto the middle platform, you can see the debris on the ground so you know where to land.

Jump to the far platform, walk off and as you step off hit right so you drop down on to the platform under, walk off and drop down right again. Walk off and right aways (I THINK there was a coin to pick up here).

Walk over to the little step on the left, walk off fast, pick up the coin, go back right up the step and pick another coin.

Jump up to final wall to land on the last platform, turn around and up jump over the the left to complete.

I gave up after the level where

there are two enemies high at the top of the screen between collapsible platforms, and collapsed platforms to the left that result in a paradox for the first fifty or so tries

Unfall to the first column. Between the next two columns is a small platform, jump there. Then there are a bunch of platforms underneath each other, like a ladder, on the left side of the next column, so fall under each platform you create.

it was interesting and intriguing at first, but then when jumps become harder, I realize that the control is somewhat wrong. Sometimes my character keep moving on one direction even when Im not pressing, some other time it doesnt respond to jump button.. or move button. This is frustating, and even more with the so-looping music in the background.. I decide to rage quit. Thanks to bluegriffin for the spoilers :) .

Loved, loved, loved the concept. Like Rosedragon, I found the controls to be laggy and inconsistent, which made it increasingly frustrating to play. This is a great idea for a game, though, and ands a terrific puzzle aspect to the platforming.