The Agency of Anomalies:
Cinderstone Orphanage

The word 'orphanage' tends to conjure up images of starving waifs in ragged clothes begging for more gruel, doesn't it? However, the so-named orphanage in today's fantastic adventure hybrid from Orneon is not that type of orphanage, or at least, it doesn't appear so at first. This is a place for "special" children, children who have abilities that are outside of the norm. Unfortunately something has happened to both the orphanage and the children in The Agency of anomalies: Cinderstone Orphanage and it must quickly be put to rights before something terrible happens. Something even more terrible than a musical about cheeky pickpockets. 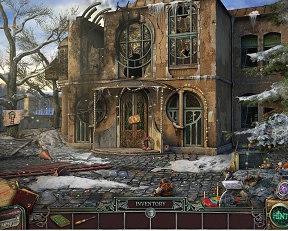 Once again you are an agent of the Agency of Anomalies and you've volunteered for a doozy of a case: The Cinderstone Orphanage just blown up, but the children that should have been inside and their caretaker are mysteriously missing. Are they alive? Are they dead? And just what caused the fire? You must discover all this and more while exploring the burnt wreck of the institution, helped along by the caretaker and the children themselves (or, at least, ghostly apparitions that claim to be the caretaker and the children). They say they are not dead but trapped, and something is sapping their strength and powers. Oh yes, that's right, everyone there, even the caretaker, have psychic powers of some sort, but they are being drained and cannot help unless you can find that which mattered most to each person and restore it. By accomplishing that each person will then lend you their powers to help solve the mystery and save them before time runs out.

The Agency of Anomalies: Cinderstone Orphanage is basically a point-and-click adventure wedded with a hidden object game, so the gameplay consists of problem solving, object finding, and some beautiful and fun mini-games and puzzles. The mouse cursor of course changes to aid in the gameplay, and along with narrative hints and a refilling hint feature you will also find an additional gadget that allows you to utilize the various abilities that you pick up from the children along the way. Each person has a different ability, and each will become helpful in their own way as you work your way towards some answers. A bottom loading inventory contains the many objects you pick up along the way, either a result of the hidden object scenes or items that were just scattered about, victims of the explosion that rocked the facility before you arrived. Helpful sparks (in the regular mode of play) highlight areas of interest and showers of sparks indicate hidden object scenes, either the classic "list" type or a cool version of "reverse" scenes, where you are placing items back into the scenery rather than pulling them out. 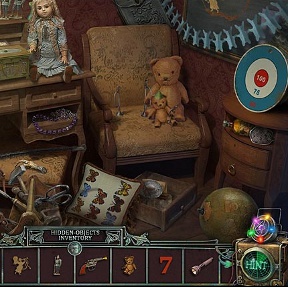 Analysis Although marketed as a supernatural story, The Agency of Anomalies: Cinderstone Orphanage is not a scary, creepy thriller. Instead it plays more like a mystery procedural, and quickly draws the player into its engrossing story. The caretaker and the children share their back-stories with you as you rush to rescue them from...well, whatever happened (don't want to spoil the ending or anything). As with its predecessor, The Agency of Anomalies: Mystic Hospital what you are presented with is a very interesting story-line that unfolds in a nicely paced manner with informative cut-scenes and tidbits of information garnered from the surroundings.

And what surroundings you will find in this beautiful game. The backgrounds are beautiful and richly detailed, despite the fact that they are a little worse for the wear, what with the explosion and fire and all. The music is choral and can be a little grating at times, but still matches the stunning scenery pretty well. The hidden object scenes are sharp and detailed, making them easy on the eyes. The mini-games and puzzles are pretty familiar variations on ones we've seen before, but are gorgeous and fun and are evenly scattered throughout the game making for some very nice pacing. 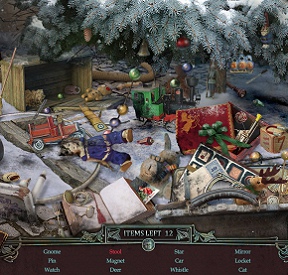 For those who want flat out creepy, scary, and a lot of jump scares then this might not be the game for you. If you want a thoughtful, involving, engrossing mystery with scattered supernatural elements, then definitely give The Agency of anomalies: Cinderstone Orphanage a try. There's a surprising amount of gameplay to be had in the basic adventure, and for those who wish to spring for the Collector's Edition you will get yet another chapter of gameplay as well as the ability to play some of the more fun mini-games. Two modes of play ensure that a wide variety of players will enjoy this mysterious ride.

The Agency of Anomalies:
The Cinderstone Orphanage walkthrough

Scene One: The Orphanage

Getting the First Paranormal Power

Getting the Second Paranormal Power

Getting to the Gazebo

Getting the Third Paranormal Power

Getting to the Treehouse

Getting the Fourth Paranormal Power

Getting the Fifth Paranormal Power

Getting to the Boy's Room

Aw a reference to Oliver! and it's negative D: Oliver! is such a fantastic musical. :3 (not the film, I'm not talking about the film version)

The Agency of Anomalies:
The Cinderstone Orphanage walkthrough

Scene One: The Orphanage

Getting the First Paranormal Power

Getting the Second Paranormal Power

Getting to the Gazebo

Getting the Third Paranormal Power

Getting to the Treehouse

Getting the Fourth Paranormal Power

Getting the Fifth Paranormal Power

Getting to the Boy's Room