The Binding of Isaac: Rebirth

Edmund McMillen and Niclais Inc's The Binding of Isaac is a weird game to talk about in mixed company. Released in 2011, it's a top-down indie action roguelike packed with literally hundreds of hours of play, secrets, unlockables, and more across its randomly generated dungeons, but it's also (and here's the kicker) about a boy (Isaac) whose religious mother hears the voice of God telling her to kill him, and so Isaac flees into the depths of a labyrinthine basement to escape her, all while battling monstrous deformed entities with his tears, wading through poop, using pills, and finding special items like The Belt, which makes you run faster for fear of a beating. If that made you pull back, even a little, it definitely isn't the game for you, but that hasn't stopped others from embracing it. It's gross, gory to the extreme, and players loved it for its brand of dark humour, piles of secrets and replay value on top of a brutal difficulty, and now it's time to go back to the basement once more with The Binding of Isaac: Rebirth. It's not a sequel or an expansion. As the title implies, it's a complete overhaul of the original game (and the Wrath of Lamb expansion) that more than doubles all the content with tons of new enemies, items, surprises and more, on top of a graphical revamp and a new soundtrack. 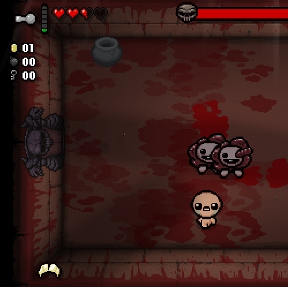 Rebirth still plays the same as its predecessor, from mechanics to format. Isaac descends through randomly generated levels of the basement, fighting off enemies and bosses in each one, and if he dies, it's game over. Isaac's primary weapon is his tears, which as before can be upgraded with the different items you find, and they fire out from him in the direction he's facing. Bombs can be found to destroy enemies and obstacles, as well as potentially reveal secrets, and other items like Tarot Cards and Pills can be found and used as well, though you'll need to figure out what each one does through trial-and-error. As you play, you'll find coins you can spend at the shop for items, or use them for... other things. See, the thing about The Binding of Isaac is that part of the fun is uncovering all of the game's rules and mechanics for yourself, so talking about them more in depth here would spoil it for you. The whole point is to experiment and explore, and to figure out how to unlock the game's sixteen endings, even if you have to die several (hundred) times in the process. 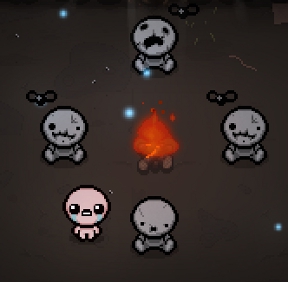 If you're a fan of the original, there are several things you'll notice different from a mechanical standpoint, such as the lack of mouse control options, and the fixed resolution. Each playthrough you have will now have a "seed", which you can see on the pause menu, that you can write down and enter again the next time you start a game to get the exact same configuration of rooms and enemies. (And can even be shared with other players.) Rooms can be of different sizes rather than the simple fixed square, and the unlockable characters have their abilities and requirements displayed from the get-go. Obviously discussing all the new items, secrets, and enemy types would sort of ruin the very experience Isaac fans love, but suffice it to say you're going to start running into new creatures and equipment virtually immediately. Some enemy types feel like simply combinations of preexisting foes and their characteristics, but suffice it to say they add a tremendous amount of variety, especially with the sheer number of them that can fit in the larger rooms. 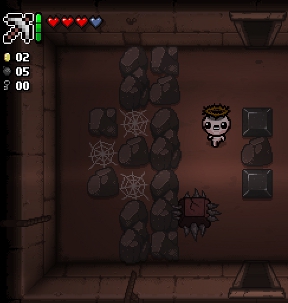 The biggest change when it comes to the more pixelated style is actually that the whole game feels a lot darker and more menacing, aided by its new discordant, Silent-Hill-meets-Hotline-Miami-esque soundtrack. Whereas before The Binding of Isaac had a sort of mildly whimsical cartoonish feel to it all, like someone making a Precious Moments figurine hold a butcher's knife, Rebirth feels much grimmer, more oppressive, largely thanks to the increased gore, filth, and heavy use of shadow. It's strange to say, since The Binding of Isaac has always been a disturbing game in concept and presentation, but this might be the first time it really feels like it from every aspect. If you're unsure as to whether the content in the game might be too much for your preferences, you can play the free online demo of the original Flash version, but take it with a grain of salt as Rebirth offers a great deal more of, well, everything, including a more ominous atmosphere.

Remaking a game, especially one as hugely popular as The Binding of Isaac was, is always going to be hard, because you run the risk of alienating your fans if you change too much, and upsetting them if you don't change enough to make them feel like they got their money's worth out of another purchase. While Rebirth's visual overhaul is going to be a matter of personal taste, however, it's undeniable that this is The Binding of Isaac +++ in terms of content. The way it plays hasn't really changed (... unless you preferred the mouse... ), there's simply more of it. A lot more. It's added back that sense of discovery that made the original so popular and made the whole thing bigger, beefier, and badder. Literally, since the minimum system requirements are double that of the original, so make sure you can run it, first. The Binding of Isaac: Rebirth is a remake that's as faithful to fans as it is its source, piling on the new and polishing the old, and represents exactly the sort of drive and passion we should be supporting from the developers we love.

I love The Binding of Isaac, but I'm fundamentally against adding content to a game that has already been released, and releasing it as a new game. To me this seems like overpriced DLC. I wish I hadn't purchased the original and instead I had just waited a long time to purchase this.

I'm conflicted though; it might just be semantics that's upsetting me. I mean if they had just called it TBoI2 I might not be complaining.

This is a knee-jerk reaction. I should reserve judgement about the game until I actually play it. Until then I'll consider it TBoI2, and not TBoI:RB.

I think that's a valid feeling to have, and certainly some people felt similarly I'm sure when Baldur's Gate: The Enhanced Edition was released. All I can say apart from what I've already said in the review (though as mentioned it's hard to talk about all the new things without spoiling the game) is that as a fan myself with dozens of hours into the original, I feel like my money (which at the time was $10.00 since they offered a discount for owners of the original during preorders) was well spent, and I don't feel cheated. It's not just the extra content, which is still essentially double the original game, it's the art, the soundtrack, the new engine the game was coded in, the seeds, etc... one of my complaints reviewing sequels in the past has actually been that they often don't add enough content to be considered sequels and probably should just have been tacked on as expanded editions or something. Conversely, I personally feel that here is a remake/expanded edition that goes above and beyond what a lot of sequels ever do. Ultimately it's something you have to decide for yourself. :)

Just an FYI, this is also on PS4/PSVita.

Yeah, this is a completely re-coded and rebalanced version of the game. It's more akin to, as a random example, the DS rereleases of classic NES RPGs, where they fully redid the art, translation, and systems.

"Each playthrough you have will now have a "seed", which you can see on the pause menu, that you can write down and enter again the next time you start a game to get the exact same configuration of rooms and enemies. (And can even be shared with other players.)"

Well, this game has now jumped a few places up in my steam wishlist...

Good review, but I must correct one thing:

You don't shoot tears in the direction you're facing. If you're using keyboard, WASD moves you and arrow keys are the direction you shoot. With a game pad (which this game has native support for, unlike the first Flash version) left stick moves and right stick shoots.