The Detail - Episode 1: Where the Dead Lie

This game received a rating of R for reference to child molestation, frequent swearing and racial slurs, and depictions of violence and dead bodies. Please avoid this game if you are sensitive to any of these topics.

A nighttime, sparsely lit cityscape. Rain pattering the asphalt roads. A dead, bloodied body. A mystery to solve. This is a set of tropes that many good noir titles have, so it should be no surprise that they're all included in Rival Games' mystery adventure indie title, The Detail - Episode 1: Where the Dead Lie. You control the destiny of this this dark point-and-click game as you follow both Detective Moore and former police informant, Joe Miller, as they discover who's behind the murder of a Ukrainian mobster. It won't be an easy task with higher ups breathing down your neck and trigger-happy gunslingers around every corner. But you know that you can do it... you have to do it. No one else will save this city from the evil spiral of drug dealing and human trafficking in which it is finding itself. 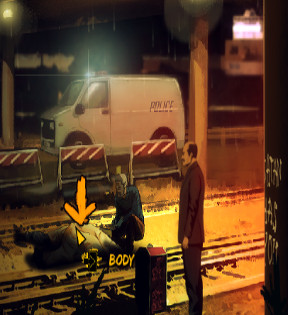 The Detail is an interesting blend of point-and-click game mechanics that you may have seen in previous titles separately. You are sometimes tasked to make a one-time choice from a limited number of actions. Occasionally you have a timed event that involves a click-and-hold mini game. Other times you are given a conversation tree to navigate where either you will have a chance to explore all the options (mutually inclusive: folded arrow) or each set of choices is a one time deal. Last but not least are the scenarios that are more traditionally like an adventure game. You will have a (small) set of rooms to explore and examine, collecting the necessary tidbits of information you hope will solve the case.

Rival Games has done a fantastic job of conveying a mood appropriate to the genre. With a fitting blend of music and crime noir style comic book art, you'll find it hard not to don a trench coat and sip awful coffee while playing. Where the game falls short is in its clunky animation. It's telling that the artists are probably more familiar with drawing still scenes. But aside from this visual aspect and that the game assumes you're familiar with crime terms such as "GSR" and "luminol" (although, after well over a dozen seasons of CSI: Crime Scene Investigation, who hasn't heard of these?), The Detail offers a gripping experience. Additionally, with multiple options to get to each point of the game, you will likely be playing this 2 hour game several times over to explore each scene as you eagerly await Episode 2's arrival.

Mac OS:
Get the full version

Aw, I was all excited to play this but then I saw it cost money :(. Not enough noir games out there. It's a shame I have to pass on this one.