Although I consider myself a modern sort of gal, I am vehemently opposed to any sort of "eBook". Keep your Kindles and your Nooks, and deliver unto me the soft sound of pages turning in a quiet afternoon, and the weight of a sturdy cover and binding in my hands. As a result, I tend to regard any sort of electronic representation of literature with the sort of vaguely befuddled, vaguely irritable suspicion of an old lady yelling at the neighbourhood kids. So I was surprised when I discovered that The Great Gatsby makes the transition from classic literature to a point-and-click/hidden-object hybrid with the grace and charm of a dazzling young socialite... kinda. 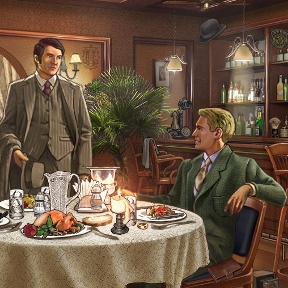 Gatsby is Jay Gatsby, a man who has spent years clawing his way to the top of society, intent on making a fortune. Why? Well, you'll see. But there's a reason for his lavish party, and his choice in neighbours. You are Nick, new to the neighbourhood and calling on your cousin, Daisy Buchanan, who insists she's "paralysed with happiness" in her marriage to wealthy, powerful Tom. The game plays out in chapters where the primary focus is hunting down objects from a list, and the characters converse and provide narrative as you go along. It's a welcome merging of story and gameplay that makes it feel almost more like an interactive novel than anything else. Even the cutscenes have extra hidden-objects for you to find to boost your score. While you can't impact the story directly, you do get to make martinis and clean up after some rowdy party-goers! WOOOOO!... wooooo....

In each scene, you'll also find letters that spell out a certain word; find all the letters (or just guess the word Wheel of Fortune style) and your hint button will receive a boost to how quickly it recharges. In an interesting addition, objects you find also give you points you can spend to decorate a virtual library which does... absolutely nothing. Maybe it's a complex metaphor for .... orrrrrrr maybe it's just a vestigial add-on in an attempt to bring in the collector crowd. (That would also explain the numerous trophies you unlock as you play.) Of course, most of us don't have the sort of money that Gatsby throws around, so maybe this will be sufficient comfort for the luxurious library we'll never have. Full of books, antiques, and... hamsters?... mmm-hmm. 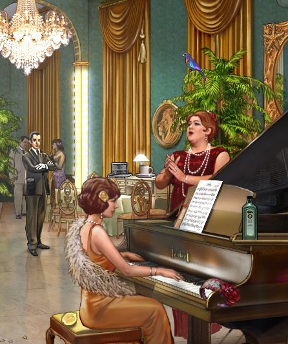 Analysis: So how well does the game tell the classic story? Decently. It's not a particularly cheerful story, despite the bawdy, energetic era it represents; people uncomfortable with scenes of adultery and domestic abuse might want to steer clear. It's frustrating that the game's narration is silent for fairly long periods of time occasionally, and certain scenes are completely devoid of narrative; a shame when you consider how much of the original story's characterization has been sacrificed. As far as the presentation goes, The Great Gatsby hits it out of the park with rich storybook illustrations, lush environments full of subtle movement and life, and an excellent soundtrack and set of voice actors.

Unfortunately, what it isn't is particularly exciting. This is partly due to some disappointingly bland attempts at puzzles that have little to do with the actual game, but the blame mostly comes to rest squarely on the shoulders of the pacing. Admittedly, Fitzgerald's classic isn't exactly a tempest of action, and, being fairly short, is a lazy afternoon sort of book. As a result, The Great Gatsby is unfortunately going to lose a chunk of its potential audience just because of how slowly things move. If the book is armchair reading, the game is armchair playing; something mellow to sink into for an afternoon.

If you're looking for something different and don't demand chainsaws, explosions, or car chases to have a good time, then you should absolutely check out the demo to this promising title. While not 100% successful, The Great Gatsby at least tries to be different, and in a market full of cookie-cutter identical hidden-object titles, any innovation at all should be celebrated. It probably won't get all the attention it deserves, and despite its flaws, is definitely worth a look. And then go read the book, because you can never read enough anyway. Kids today, I tells ya.

Loved the book The Great Gatsby! However last time download a Big Fish Game, my antivirus went bonkers and the computer became real slow! Anyone experience the same? I wonder if i can get this game through another site?

[Antivirus warnings for anything downloaded from Big Fish Games (or anything else recommended by the review team here at Jayisgames) is sure to be a false positive. Big Fish Games guarantees their games to be free from viruses and malware of any kind. That is one reason why we recommend them and stand by our recommendations. If your computer ran slowly then it most likely did not meet the minimum specifications required for the game downloaded, which is why it's always best to try the demos first before purchasing anything. -Jay]

Now this is how a book/hidden object game should be done. I especially like how objects aren't always in the same place when you revisit scenes. I hope this company has more of these in store for us.

I also loved the book and look forward to playing the game - but am having problems - the game downloaded alright from the Big Fish Games site, but when I clicked to play though I received an error - access violation. I'm not a tech head - so having no idea what this means I followed your advice Jay and emailed BFG. I got a very good response within 12 hours, apologising for the inconvenience asking me to undergo a "dr felix" diagnostic and send the report back to them. I have done this and am awaiting a reply (only did it a couple of hours ago, so that's cool). I will post again to let you know how it all went - but so far I am impressed with BFG's customer support.

Does it have the scene

or is that off screen?

As promised (see comment above) an update on playing this game. Unfortunately I wasn't able to, while BFG were very supportive (Thanks Emily in Seattle) and fixed the access violation problem (needed a new graphics driver), I ran into a new problem with the game screen freezing on opening. Seeing I had already downloaded the game twice (at just shy of 200 mb a pop) and being on a limited download plan, I stopped going any further. I'm sure BFG could have resolved this new problem. Would loved to have played The Great Gatsby - but ce la vie...