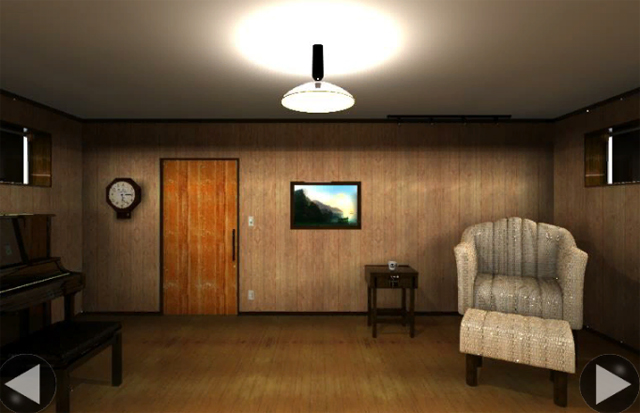 After one year break, Tesshi-e is back! TWICE!!

The end of the last year we had to do without traditional Santa's room and looking for ten happy coins (precisely, us PC players, as the game was done but available for Android only). Now, finally, we can enjoy it!

One day at the end of December during your evening routine you find a memo on the floor - hey, it's from your old friend Santa! He's back! This time he doesn't want a cup of tea or coffee - well there is one cup of something on that small table overthere - he wants you to find ten happy coins, some simply lying around, some hidden, and solve few nice puzzles. Three gifts are waiting for you at the end!

The game has autosave and one ending.

Santa has some new tricks for the new year.

The green memo from the intro is nowhere to be found, so you can start by looking at the locked door and the clock which has a keyhole (and something on its face that you can't reach). To the right you see a painting, and clicking its corners makes it tilt and reveals some letters on the wall behind. A small table below that has a cup of coffee covering a Happy Coin, and its drawer has a grid of buttons and a clue with an arrow connecting two stars. On the right, you see a comfortable-looking armchair and a Happy Coin in the corner. And there's some spotlights on the ceiling which are turned off.

Turn right. Next to the armchair you see a shelf with several objects, including a radio you can pick up. A box on the left has a happy-looking Santa figure and an instruction to insert "10 Happy Coins". A box on the right has two Mr. Birdy figures wearing colored hats, with an empty spot in between them, but the buttons on the box don't seem to work. Look at the bed and lift the pillows to find another Happy Coin.

Turn right. The four windows here have zodiac signs on their panes and card suits on the wall beneath. You see a small Mr. Hippo box with a three-digit lock, and a locked trapdoor in the floor. You can click the tree planted in a barrel to zoom in and see its colorless lights. While zoomed in, you also see a high shelf with something hanging off of it, and a blue switch panel with a white button. The panel has a cover that can be opened to reveal a hole for a battery.

Turn right. There's a cupboard with two doors that contain a four-digit box with zodiac sign and card suit clues, as well as two drawers with five-digit and four-digit locks, each having a clue with letters. On top of the cupboard there's a silver cloche/dome secured with a screw, and a box with a Santa figure on one of three platforms and a button next to its narrow slot. To the right of the cupboard, there's a piano. You can't play the piano, but you can move its stool aside to use the pedals. There's a box on top with a row of four buttons that light up.

Examine the radio and extend its antenna, and use it to retrieve the orange S-shaped hook from the shelf above the tree.

You can also click the dial (display) of the radio to take a closer look at the tuning. Do those letters and numbers seem familiar?

The top drawer of the cupboard has the clue FMAM, which suggests that you need the numbers from the FM and AM sides of the display.

The red line covers the numbers 82 on the FM side and 800 on the AM side, so enter 82800 in the drawer and open it to find a Santa Claus figure and a clue with a grid of numbers.

Use the clues from the windows and the top drawer to unlock the safe in the cupboard.

The heart, spade, diamond, club suits on the lock refer to the windows from left to right. Looking for the Cancer, Leo, Virgo, Libra signs on those windows, you find them on the second, third, first, third panes in the right, left, right, left columns.

The corresponding positions in the number grid form the code 7393. Enter that in the safe and open it to find another Santa Claus figure.

Place both of the Santa Claus figures beside the one that's already there on the cupboard, and a knife drops out.

You can now press the button on the box with three Santa Claus figures to make them dip slightly one by one. What could that be a clue for?

Push the piano pedals in the same (RCLLCL) order, and the cover opens up. Zoom in, and you find a word clue together with a hexagonal key and Happy Coin.

Use the clue from the piano to unlock the tilty painting.

When tilting the painting, the letters MIXMAX appear under the ⌞⌝⌟ ⌞⌜⌟ corners.

So click those corners, and the painting comes off to reveal a hidden compartment with a yellow hat Mr. Birdy and a small hole labeled with Off and On.

Place the Mr. Birdy figure in between the two that are already on the shelf with books.

A Happy Coin and switch appear in the hole, and the three digit buttons activate.

Attach the switch to the hole behind the painting, and turn it to the On position. This starts a little light show with the spotlights nearby.

Use the clue from the spotlights to unlock the box on top of the piano.

Click the buttons on the box in that order, and the lid pops open so you can take a dry battery and Happy Coin.

Place the dry battery into the panel behind the tree, then close the panel and push the button.

The lights on the tree flash different colors, with long pauses to let the game tell you what colors they are.

Use the clue from the lit Christmas tree to unlock the Mr. Birdy box.

(If you find that the clue changes too fast, you may be able to click outside the window to completely pause the animation.)

The long pauses are very helpful in letting you count the number of lights of each color: 6 green, 4 yellow, 5 red.

Since the colors are in the same order as the hats, you can just enter 645 into the box. The buttons come off to reveal a small key.

Use the small key to unlock the trapdoor in the floor. It's a shallow hole with a bag at the bottom, out of reach.

You can take a note from the underside of the trapdoor.

Use the clue from the note to unlock Mr. Hippo's box.

Using the letters on the note (EHINORT), only three digits can be spelled out: One, Three and Nine. (You could spell Ten, but there's not enough T's to spell Thirteen, and in any case the design of the box implies that only digits are spelled out.)

Since there's exactly one H, one I and one O, the code must have exactly one of each digit, so the next step is to find the correct order. Looking at the letters already filled in on the note, THREE can only appear in the leftmost five squares, which means the second digit must be ONE and the last digit must be NINE.

Enter 319 in the box, and it dispenses a screwdriver!

Use the screwdriver to remove the dome on the cupboard. That's a beautiful cake!

Flip the dome over to find an arrow clue on the inside.

Use the knife to remove a slice of cake, and you find a Happy Coin underneath.

Use the clue from the underside of the dome to unlock the drawer beside the painting.

After pushing those buttons, the drawer slides open and you see a box with a Happy Coin on top. Opening the box, you see that it's full of rings, but one ring is missing.

Use the hexagonal key to unlock the wall clock. This changes the time on the clock, and the minute hand sweeps and drops a ring out the bottom.

Place the ring in the ring box, and another drawer slides out of the box with a necklace in it!

Use the clue from the adjusted clock to unlock the bottom drawer of the cupboard.

The clue H:M refers to the time in hours and minutes, but 9:30 is the wrong code.

The time needs to be entered in a 24-hour format, and you can see through both windows that it's dark outside, which means that the correct code is 2130. Enter that in the drawer and open it to find a Happy Coin.

Attach the hook to the necklace, and use it to retrieve the bag from the trapdoor.

Looking in the bag, you find the last Happy Coin.

You now have all 10 Happy Coins required:

Place all of them into the Santa box as instructed, and a door key falls out.

Use the key to unlock the door and escape. Santa rewards you with a gift of your choice:

And then he wishes you good night and a good year.