Described by its creators as "MacHeist to go", The Heist is a brand new iOS release that packs four types of puzzles together in a thrill-filled world where you play a spy trying to crack open a safe. From the fake phone calls, the heavily-secured steel door in front of you, and the real prize waiting for you at the end, The Heist is a challenging collection of puzzles that pulls you in with flawless execution. 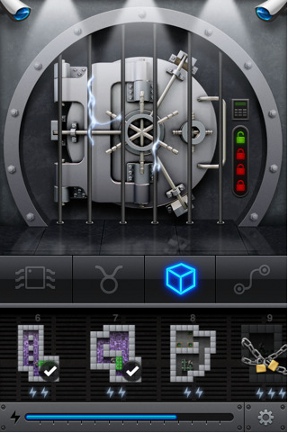 The Heist is divided into four puzzle types, each with fifteen levels that unlock in groups as the safe cracking progresses. First up is a slick traffic jam puzzle that challenges you to move wooden blocks around so you can slide a fuse to complete a circuit. Next, it's sudoku with colored symbols instead of numbers, followed by a block sliding sokoban clone. Finally, connect wires to each other with a sliding puzzle game. Pretty basic stuff, on the surface, but the touch screen implementation is phenomenal, especially in the sokoban game.

You can work on the puzzles however you like, skipping between games or hopping over levels to a certain extent. To get the safe open, however, you'll need to barrel through the stages like the super-smart puzzle solver that you are. Show that safe no mercy, because there is a real prize waiting for you at the end. What is it? The Heist's website promises something that's "all yours, totally free". Sounds like my kind of thing!

Analysis: Puzzle collections of this ilk are quite common for casual gamers to come across. But in the case of The Heist, it's the package that makes it something special. The alternate reality game-style presentation is superb, and receiving fake phone calls makes you feel as if you were opening a real safe all by yourself. The puzzles, while small in number, are fantastically challenging, so don't think for even a moment you can breeze through the game without getting stumped many, many times.

The MacHeist comparison is a surprisingly apt one, as The Heist really does feel like a real world puzzle solving challenge. If you're not familiar with MacHeist, it's a semi-regular ARG event that presents participants with a series of puzzles that lead to clues that reveal discount codes for Mac software unveiled at the end of the heist. The mobile incarnation of the event has simpler puzzles and something of an alternate reality game feel to it, and as mentioned above, there's a real prize waiting for you inside the vault!

The Heist doesn't have impressive numbers to wow you with, but the game itself is nothing short of a delicious must-own challenge. A real world prize, excellent puzzles to complete, and a cool spy-like presentation that draws you in with a pseudo-alternate reality game. It's a winning game no matter how you look at it!

The Heist
(iPhone and iPod Touch)

This was a lot of fun for me, and right now the kids have discovered it. I could open the safe reasonably easily (you don't need every level of every game to do it), but the kids are complaining it's too hard already.

Has anyone redeemed the prize? I saw you had to register, and decided to hold off and see if anyone had gotten it.

Nice game, just finished. Very high production values. Seems use a lot of power, so you'll want to play plugged in. A little disappointed in

the end. Once you complete all the puzzles, theres no more Sophie after you open the safe.

I registered for the prize. All you have to give is your email.

As a previous MacHeist follower, I was keen to play the game.

If you do register and stuff, you will redeem:

A free copy of the game Eets

If you beat the entire game (all puzzles), you unlock another achievement and get a discount (small, though) on the upcoming Macheist bundle.

I have redeem all the prizes and its to much fine. TalktoWendys