The final installment of season one of The Game Kitchen's popular point-and-click horror adventure series has finally been made available to everyone, and The Last Door Chapter 4 races towards its unthinkable conclusion. In Chapter One a letter from a childhood friend brought you to their seemingly abandoned estate, and Chapter Two sent you back to a place you barely remembered to search for answers you might wish you never learned, while Chapter Three continued down a dark path into the woods. Now, it seems as if our hero Devitt has finally caught up with someone who can give him answers, but at what cost? To play, just click to interact, and the changing cursor will represent the action you can try to take. Click the magnifying glass to use it to examine items you're carrying, or just click the item itself to ready it for use. You can also try to combine things you're carrying by first clicking on one item, and then another... they'll automatically merge if they're supposed to. Once you've already been through a door or other area transition, the next time you want to go through it, just double-click it and you can immediately skip to the next area instead of needing to wait for Devitt to walk there. Just make sure you have played the first three chapters before you play this, or nothing will make any sense! 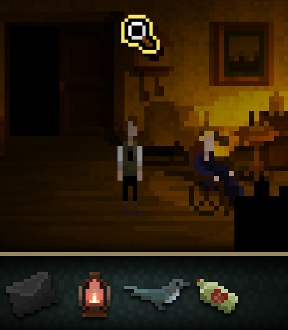 Chapter 4 of The Game Kitchen's wonderfully, creepily Lovecraftian horror series has a lot of work to do when it comes to wrapping up the game's story, though thankfully it does a solid job of balancing exposition and story with exploration and puzzle solving, even if most of your time is spent wandering around a location that's a bit too similar to the first chapter. While most of the gameplay is fairly logical, there's a lot of backtracking, and at least one instance where progress depends on discovering that something new has triggered in an old location for no reason whatsoever other than the game wouldn't proceed if it didn't, and you need a gruesome (if somewhat silly) solution to one of the game's puzzles. While Chapter 4 offers up jump scares like its predecessors, they're extremely well executed, and the atmosphere is heavy with tension and unsettling dread. Doctor Who fans will probably spend a while on the edge of their seat at one point. If you're expecting a lot of answers, however, you're out of luck, since this installment offers few and feels like it mostly exists to set up the second season rather than actually resolving anything. Engaging, creepy, and compelling? Yes. Satisfying from a narrative point of view? Ehhhhh. As of this writing, episode one of season two has been released, but is currently only available to people who donate, though as usual it will be released for free once the following chapter comes out. (Which, of course, is when we'll review it with you!) Though this finale might not bring quite enough answers to its eerie tale compared to the questions it raises, it's as beautifully executed a piece of Lovecraftian style horror as ever, and perfect for playing with the lights down and the sound up.

Explore the Upper Floor of the Manor

Collect the First Half of the Photo Development Materials

Explore the Lower Floor and Outside of the Manor

Collect the Second Half of the Photo Development Materials

Explore the Cellar & Search the Grave

Find & Use the Telescope

I feel that I am still in the first stages of the game, but here is what I found in rough order. NO DIRECTIONS GIVEN!!!

Hi Nathaniel! Have you tried

checking out the note in the study, and the clock in Alex's room?

Combine the hook with the rope

Use it on the well

For the dark envelope and the light bulb...

Go outside and back towards where you started in the woods, you will encounter a dead deer

Take the bulb back to the dark room and install it... you can then work with the dark envelope

Explore the Upper Floor of the Manor

Collect the First Half of the Photo Development Materials

Explore the Lower Floor and Outside of the Manor

Collect the Second Half of the Photo Development Materials

Explore the Cellar & Search the Grave

Find & Use the Telescope

How exciting! I must play the other games again, though, because I can't remember all the details. If you're in that boat, you're not alone.

THAT was Insane and intense. I think I understand the goal of the protagonists.

They want to visit another dimension, but the unseen friends think that visiting the other dimension will tear open a hole that anything over THERE can cross whenever THEY want, am I close?

after the photo really appears to not belong in this game. How did they leave and return? Why did they leave then return? Are they humans with rat masks, or humanoid beings with literal rat heads?

Is it me, or does the text respond with 'incorrect' for all tries for the last puzzle, including the correct answer?

Is it me or is this installment quite a bit more ... pedestrian than the rest?

Shudog, it worked for me. Did you

No, in the telescope view, I pressed the exact stars and the text continually said "That's not the triangle." I actually had it correct the first time, but kept trying because of the text.

Really, despite the somewhat compelling story, it just feels like we've done this all before. Same dark atmosphere, same Victorian setting, same house, same puzzles. It all feels very samey and claustrophobic. And the story. I won't even comment on it, but there's so much ambiguity in this series. I won't say that I need plot spelled out for me, but it is both ambiguous and not at all, if that makes any sense.

Actually the puzzles this time are kind of irritating at times. I got caught on a couple which I won't go into detail about, but rest assured I was annoyed once I discovered they were triggered by simply walking around.

Personally, I don't really see where any of this is going. The idea that they're doing this episodic thing in "seasons" doesn't even really give them any incentive to bring their story to a satisfying conclusion. Taken as a whole, the story/gameplay arc just doesn't really go anywhere. Creepy things happen in houses. I suppose I'm being glib but while the atmosphere is nice, atmosphere will only take you so far and The Game Kitchen hasn't really done much to make this a must-play.

Just caught up with this series, doing my first play through every game over the last few days. I love this series so far. Obviously great atmosphere, amazing sound especially (though I'm not someone who normally pays much attention to soundtracks or fx). And there's just something about pixellated horror adventures (Deep Sleep series anyone?).

I agree the gameplay interfered with story a bit here, because when I think about the story I find no glaring defects except for a minor, pacing-related one. I agree with others that navigating the mist could have been more intuitive (once you've met the requirements to do so). I was very lucky it only took me two tries. Maybe some help with what parts of the poem to pay attention to? I found it interesting in the comments for LD3 (previous game) that some people had probs figuring out what to do with the musical score, but I see no comments from anyone who had trouble figuring out what to do with this game's light bulb in the photo lab??? I had no trouble with the former but the latter... Even with the "clue" on the floor, I doubt I'd ever have figured that one out without looking at the walkthrough kindly posted above. And I had seen the place to use it already! T_T

I don't mind the leisurely pacing of these stories stretched over different "seasons" since that's all part of the atmosphere, but I did see a minor pacing problem in this particular chapter. If there was more going on in the slums (I saw a lot of potential there personally), it would have been fine, but for how little happened, I thought that part went on too long. The fortune telling scene was great though, and the oil scrawls on the walls will hopefully connect to whatever the rat-headed people and "sleep" themes are about. (Holy crud how many horror games reference lucid dreaming lately though, lol)

I *LOVED* that there were further references to the same creature one of the patients in the hospital described in LD3 before falling asleep (shadows and the feel of treebark). I had been watching for the rest of the game for that to come up, haha. If I'm not mistaken, this might also connect to the man in the library this time who spoke of reading "shadow words" in the dark. I'm looking forward to more.

A lot of them-- like the second look through the keyhole-- I kind of expected and steeled myself for but they were still startling (as with the previous games). The bits with the "hide and seek woman" and after the photo took me *competely* by surprise and had me gasping in fright. Right now I feel like this chapter had the best scares. Only LD1's "crows in the kitchen" homage to The Birds was on the level of these, at least that I can recall at the moment. :)

It does feel like it's been done before
...three times before, in fact, almost like it's some fourth part in a series or something like that...

All joking aside, I do agree with you that the series can feel samey, and the puzzles a little obtuse, but I think pixelly flash game horror doesn't get much better than this (at least that I know of for now.)

I feel like flash games are very much about doing relatively a lot with a little, and The Last Door series kind of fits that, at least for me.

The pixelated graphics, the way the minimal glimpse of plots reflect (hopefully) a larger story, even the length of the games is nice.

I do also agree with you that the Game Kitchen hasn't really done much to make this a "must play," however I guess I'd put forth that that perhaps wasn't their goal.