iOS puzzle adventure game The Phantom PI: Mission Apparition by Rocket 5 Studios Inc manages to make dismemberment, stalking, haunting, and signing over your eternal soul absolutely adorable as you play Paranormal Investigator Cecil, who helps ghosts with their problems. The ghost with the most (issues, that is) here is Marshall Staxx, who's being bullied by a gluttonous demon named Baublebelly who keeps stealing important mementos from Staxx's rock-n-roll career. Once inside the strange mansion Staxx is, uh, "living" in, however, Cecile discovers this is no ordinary place... the doors don't seem to obey the laws of physics, spooks and danger lurk around every corner, and then there's Famke, the girl who used to be Staxx's number one fan and now just wants to make sure Cecil doesn't get in her way while she loots the place. Cecil has no choice but to keep following Baublebelly deeper into the mansion, learning the secrets behind the place and Staxx's bizarre demise, in this vibrant and funny point-and-click puzzle game aimed at players of all ages. 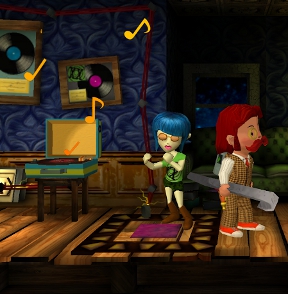 All you have to do to play is tap to move and tap on the icons that appear above Cecil to interact. In each level, your goal is to make it to the portal at the end, but considering the maze-like way the floor plan is laid out, that's easier said than done. While initially the way the doors pop you around the area might be confusing, it's important to remember that each door will always take you to its twin, wherever that may be, so by clicking the magnifying glass to zoom out, you can easily map out where you need to go or where a particular door may take you. Along the way, you'll encounter various obstacles you'll need specific items to get past, such as fuses to power switches or crowbars to pry down barricades, but since Cecil can only carry one item at a time because of reasons, you'll need to do a lot of backtracking. If you encounter Famke, she'll knock you down to keep you out of her territory, so you'll have to find something to distract her with. Luckily, girlfriend ain't the brightest crayon in the box, so you can use potted plants to sneak by, put on one of Staxx's records to make her boogy to the beat, pull the old "the call is coming from inside the house" routine, and so on. 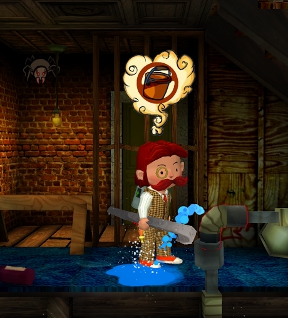 Analysis: The Phantom PI might be one of the most effortlessly charming games I've seen in a long time. Its visual style is fantastic, and infuses personality into its character animations that makes you feel like you're watching a cartoon unfold. A cartoon about demonic pacts and dismemberment, mind. Though it bills itself as "fun for the whole family", and all ages will definitely find it fun and engaging, there's a strange disconnect between the ghoulishly goofy gameplay and dialogue, and the writing you'll find in the various diary entries and newspaper clippings that tell the backstory, which is strangely more mature and grim than the former. Still, it's hard not to be charmed when the game has so much great detail, from the squeak of Cecil's sneakers, to the way the music matches the way he goes up or down ladders. It feels like it should be a console game a generation or so ago, the sort of one the kids you're babysitting won't stop playing but you secretly don't mind, and it would have been perfectly at home on the Playstation 2 with its relaxed, colourful gameplay.

The game's biggest flaw will wind up being the fact that the visual level designs aren't varied enough to keep it from feeling repetitive, and things like collecting gems or wisps or "butter sprites" (?!) feel like random busywork. The backtracking can get painful since the inability to carry more than one item, Cecil, you lazy cad, means levels that require a lot of item swapping can be tedious. As you start to piece together the tale behind the mansion itself and Straxx's strange career, however, you can't help but get sucked in. There's a remarkable amount of worldbuilding for how little dialogue there is, and it provides the glue that holds the gameplay together. It's at its strongest when it's focusing on puzzles and discovery, and at 20 levels, the game won't wear out its welcome any time soon. The Phantom PI: Mission Apparition is that rare casual adventure game that just seems to revel in being joyfully alive (... ironically... ) with its style and tone, and it's impossible not to smile as you play. One can only hope we see more missions from Cecil in the future, because this is one PI with a bright future ahead of him.

I don't mind the backtracking too much. I'd mind it a bit less if you had the ability to put items down wherever and whenever you wanted, though; that way you wouldn't have to leave item A in the out-of-the-way nook where you found item B.