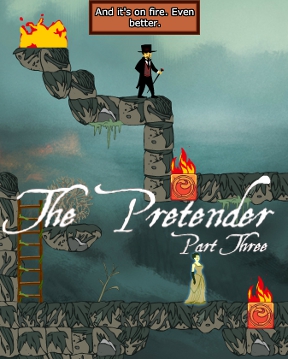 Someone once said that pride goeth before a fall, but apparently it also goeth before sucking your entire hapless audience into another magical dimension and dooming them to wander as restless souls. Whoopsie! In the The Pretender: Part 3, the next installment in Launching Pad Games' puzzle platforming Pretender series, you, as the desperate Victorian stage magician who stumbled upon a real book of magic while trying to spice up your act, are still trying to put things right and rescue stranded souls. Of course, just because you have the elements at your disposal doesn't mean this is going to be a walk in the interdimensional park, since you've got your assistant, Eliza, to worry about protecting, and an old sorcerer

In order to move through a portal to the next level, you'll need to gather the ghostly people loitering around the environment; they'll follow you one at a time when you get close to them, and then you can lead them to the exit. Of course, like any magician you've got a few tricks up your sleeve, and to get around the obstacles in each area you can walk over elemental fonts spurting up from the ground that will imbue you with new abilities and a special form. Earth, for example, lets you smash stone or stride through fire, while water can quench flame and allow you to swim. Use the [arrow] keys to move around, [R] to restart if you get stuck, and the [spacebar] to skip dialogue or use your elemental power. The game is made up of four sets of levels, each taking place in a different location, and you need to complete four non-story stages in one area to unlock the next. Other people might tell you not to play with fire, but when you're stranded in another world anything goes, so feel free to take advantage of the new elements and abilities you'll find here.

If you've played the previous installments, then a lot about act three is going to feel very familiar to you. The Pretender series has always managed to feel like a particularly classy little game, and this latest is no different, with a mellow ambient soundtrack and sleek visual style that make it look and feel professional. The puzzles become elaborate fairly quickly, so the ability to play the levels in any order you wish is welcome since it lets you bounce around whenever you get stymied. It would be nice to have an "undo" button rather than having to restart an entire stage if you accidentally zig when you should have zagged. Still, a sense of charm, whimsy, and elemental magic will get you far, and The Pretender: Part 3 has all of that in spades. Will you and Eliza ever find your way back to the real world, or will you be doomed to an eternity of performing hat tricks for disgruntled ghosts? Only one way to find out!

Earth: Font is brown with stones.

Air: Font is a white whirlwind.

The trick here is that the bracken is in patches that won't all ignite at once. It takes some fiery experimentation to determine where those patches are.

Wow, another sequel, I'm sad to say that:

This is (possibly) the last in the series

These have been the best games around, 5/5 thanks for the news JIG ;)

First of all, excellent excellent puzzling as usual. I just love the graphics coupled with the musical notes, and as always that voice-acting! Wheee!

But some disappointments:
The inconsistent art style was just a downer to me. I love the cut-out look, and to see a sudden shift to lining for landscape blocks detracted more than I expected.
If you're new to the series, there don't seem to be instructions for

using water to grow vines that you can climb, and using water to seed rain clouds. The sailboats might also throw off some new players. Odd, given the excellent tutorial hints that make the series so awesome.

Most aggravating is that I am almost to the end, and this is the 3rd time an important element was camouflaged by the background graphics. I couldn't see them for several minutes, and I knew what to look for. Some background elements also looked like they could be manipulated, but were not part of the landscape.

Last but not least, I tip my hat to the Victorian influence, but the whole thing where a woman "belonging" to a man is romantic is getting overly done, like a burnt turkey. This is clearly my opinion only - it would be nice to leave such sentiments in the Victorian period, and find some other heartfelt turn-of-phrase, eh?

I too am excited to see another installment of this game, I've been a fan since the beginning. I'm sad to say, however, that with only two levels left this might be the easiest of the series yet, boo. Maybe the next two levels will surprise me though....

Like the previous commenter, the only difficulty I've experienced so far with any of the puzzles, is seeing that I CAN put a bridge there, or that there IS a seed sitting over there. Otherwise, pretty basic.

Aaand...Finished! I think that's the first game in this series where I've been able to work out the puzzles on my own! Overall, a worthy addition to an excellent series, even if it's not as tough as the last installment.

Ending's a bit of a downer, but I'd like to think it leaves an opening for another game. Perhaps one following the magician's wife.

Earth: Font is brown with stones.

Air: Font is a white whirlwind.

The trick here is that the bracken is in patches that won't all ignite at once. It takes some fiery experimentation to determine where those patches are.

My only complaint with this game is that it's very difficult to get the right placement on ladders. On the later levels, I could spend 5 minutes trying to get off the ladder in the proper spot.

Easier than its predecessors but still a very good game. The only thing that was a bit disappointing was

the missing comments on level 4. The coughing was really boring after all the comments along the lines of 'Young man, bring me a drink'. Which, btw, is a sentence I'd love to use more often - or at all... ;-)

The ending is not exactly definite so maybe there will be more installments. I'd like that!

A great game. The puzzles for me are just the right difficulty. Some I had to leave and come back to a couple of times but all I managed to do without having to look at a walkthrough. Just as it should be.

Wow, people thought this was easier than the earlier installments? I found the Theatre levels the hardest that any of the 3 in the series had to offer. They were a fantastic tour de force of your five forms with their assorted abilities.

Great puzzle series, and I even found myself getting into the storyline, particularly towards the end. I thought I had the setup figured out from episode 1, but the twist in the first cutscene of episode 3 caught me by surprise. Fun stuff.

And as for Shudog's objection: I'd point out that as I read the dialogue, he doesn't claim she belongs to him; he claims she belongs with him. That I hope should be less objectionable to 21st century audiences; I'd happily say that I belong with my wife and she belongs with me, for example.

They call it the pretender triology because it has only 3 parts.Sorry to disappoint you guys

Hmm... The Enchantress, part 1. First cutscene: Eliza's trying a spell to let her go permanently to Lawrence's world. She opens a window, and it's him on a busy street. Then Grandpa shows up and her concentration slips (open to suggestions). The spell goes wrong and... here we go again. Different in that Eliza's the MC (elemental transformers were said to be common so those are still here), and she's trying to track L. and find the spell.

Well, the topic is already old, but I'll write it: definitely another trilogy could/should be made, this time with Eliza as the protagonist. First - it would give "more of the same", another opportuunity to play something very similar to "The Pretender" even if the trilogy is over. And second - we really need more games with female protagonists. We really need to learn that women have adventures too, that women can make independent decisions too, can have interesting personalities of their own, can dream of magic and other dimensions just like some men do. Still women are too often treated as eye candy in games and still typical "games for girls" take part in brainwashing these girls into thinking that popculture, fashion and Mr. Right are all it takes for them to be happy. Girls desperately need other role models. A mage may not be a plausible role model in today's magicless world - this is just not something people do in their everyday lives, and while you can move into other dimensions at least in your mind, it means entering an illicit path - yet it's still a role model way better than all those (nomen omen) supermodels that populate games for girls.