The Queen of Snakes

It's not a super awesome day for Miss Libellule, the heroine in Jo99's point-and-click adventure The Queen of Snakes. The hazards of the jungle (you know, regular stuff like man-eating plants) have taken care of her crew, and now a rockslide has trapped her inside a temple even Lord Voldemort might call "a bit inhospitable". All the parseltongue in the world isn't going to save you from the dangers within the temple, though... or the scares along the way. Click on the blue arrows to navigate, or anywhere onscreen to interact. Some objects can be dragged around, too. There's no changing cursor, so you'll have to rely on your keen eye for detail to solve puzzles and find the items you need to escape. Mouse over the three small buttons on the ridge edge of the screen to get the options to turn off the music or sound effects. 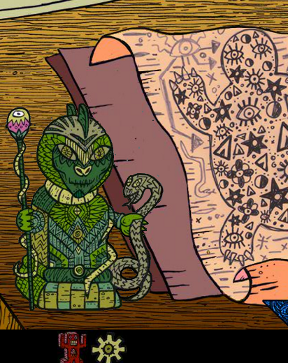 The Queen of Snakes is, first and foremost, a gorgeous, gorgeous game. Though its distinct art style can make the lack of a changing cursor to indicate interactive zones even more challenging in places, the unique visuals make this one a fantastic treat to explore and infuses it with more character and personality than most other adventure games. Each room is more detailed and fascinating in the next in ways both beautiful and ominous. The way the music swells and evolves as you explore is a great touch. Most of the puzzles rely on being observational, which means the high level of detail can be a bit overwhelming, or simply putting the right item in the right place. If you actually know where you're going and what to do, The Queen of Snakes won't take you very long to complete, but you'll still want to take your time because this is an experience worth savoring. Mysterious, compelling, and full of secrets, The Queen of Snakes is tricky but top-notch adventuring more than worth your time. Now we just have to wait for the sequel to find out what happens next!

Play The Queen of Snakes

Thanks to Nicop for sending this one in!

The Queen of Snakes Walkthrough

The Queen of Snakes Walkthrough

Oh... my word. That is totally incredible art.

It didn't take long for me to load or play. Ironic given this old clunker. My flash is updated, if that makes a difference.

So, umm, did anyone else notice

that they just took off with a wild tiger on their ship?

Thoroughly enjoyable. I liked how the music built to a crescendo as you progressed through the game.

Great ending--worried it was going to be one of those obnoxious cliffhangers, but it's pretty satisfying:

Author has an amazing sense of humor about her own setup. I'm charmed that everyone fortuitously made it out alive, artifacts intact (love tiger dude).

Indy, what the heck were you doing in a temple of snakes? Bad, bad from the start.

Couple things around the Temple seem to suggest a hoax, esp. the anachronistic contents of the closet (including ubercreepy barbie/ponyface/bratz doll picture, augh). Maybe it's just meant to be funny (Jungle Gods--they're just like us!), but hey. Curious if it'll be returned to in the next segment.

The artwork is so intricate and detailed, very much the antithesis of the point-and-click games from Japan, which are so antiseptic in their style. Someone should write a dissertation on how cultures affect the styles of their games.

as he rides it on board, that it's not actually wild--or maybe the tiger's buddies with the luggage goon from back when, a la Christian the Lion--and the "attack" is a bear hug.

Cool game. The only thing that really threw me was that

the yellow disks looked orange on the machine, so I assumed those combos were red herrings.

Also, I thought the tiger was a

I feel like I'm going mad or I'm in the Twilight Zone. I could have sworn that I played another Jo99 game on here. It had lots of sciencey machines and brains in jars, but I can't find it in the archives. Does anyone else remember it? Has my cheese slid of my cracker???

@Dandy, no worries - your cheese is still firmly ensconced. I had the same reaction when I saw this game. The style of the artwork is very familiar, though the one I remember is one where you are on an island. Not sure why they're no longer on this site (or where I saw them if they've never been on JIG), but you can find them on Jo99's own website. Love the artwork!

Thanks Melcake! I'm not cuckoo for coco puffs! It was Humanoid 47 I was thinking of.

As to the mystery of whether they were ever reviewed on here (Or, like you, where on earth I played it if not on here! I'm not cheating on you JIG, I swear!) I guess we'll never know...

That was amazing. Just... amazing.

I'm looking forward to that sequel with great anticipation!

I am being mesmerized and entertained playing The Queen of Snakes. Wow, this look is quite uniquely surprising- reminds me of a big paint-by-number picture/mural. I love this complex design,kind of abstractly filled with hidden animals and things. I've done well up until going down the ladder, below the ground; the waterfall section, and not knowing what to look for in the other 2 or 3 rooms at that same level. (But I am not giving up.)
I have 8 things: 1 gear, 1 lizard medallion thing, 2 green & 1 blue totem guys, 1 green eye, 1 green turtle & 1 snake. What do I do next down here?

PurryCat, you can consult the walkthrough above (you'll need to have things enabled on your browser to see spoilers).

I'm also thinking you don't actually have some of these things in your inventory. They should be used up.

I put in the right combination underneath the painting on the bedroom wall, but when I click on it, it doesn't do anything! D: Help?