The Ruins of Machi Itcza

Legend tells that deep within the remnants of the Maka civilization, there lies 13 keys which, when brought together, grant the secret to the meaning of lives. Machi Itcza, an imposing fortress of a temple, was built to protect these keys. That was thousands of years ago, however, and while many traps and challenges await those who seek the secret, you'll be the first outsider to explore The Ruins of Machi Itcza. A retro metroidvania platformer by MNWS, The Ruins of Machi Itcza gives you the chance to join the ranks of the greatest pixelated archaeologists, right up there with Lara Croft, Nathan Drake, and, most appropriately, Pitfall Harry. 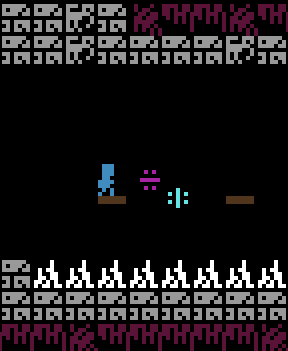 Move and jump about the temple using the [WASD] or [arrow] keys, trying to locate the number of keys indicated in the upper-left. The way the game world expands deserves to be explored by yourself, but suffice to say the more keys you collect, the more of the temple you'll be able to access. Checkpoints are liberally scattered about, should your avatar meet an unhappy death at the end of a spike pit. You can also return to the last checkpoint at any time with [R]. [M] brings up the map screen that will definitely help to keep you oriented. More than a little reminicient of Redder, The Ruins of Machi Itcza is a game about exploring a setting, and it presents quite an engaging one in a very low resolution. The gameplay definitely is more focused on methodical experimentation and precise platforming rather than enemy-whipping, which may make its pace and character movement a little too meandering for some. However, overall, The Ruins of Machi Itcza succeeds in granting players the archaeological feel of rediscovering something ancient and mysterious, and without having to deal with that friggin' Shrine of the Silver Monkey, even.

Play The Ruins of Machi Itcza

The links should be working now. Please try playing again. :)

Well! That certainly was... an ending.

...did I reach the end or am I having a seizure?

Did everyone else get

to the last room as everything was glitching and not get the last key with a game over screen?

@bluegriffin18: that's what I got too

Anyone figure out what the hearts were for? I got one, and saw another that seemed to have no paths to it...

I was able to collect 3 hearts within the game, sadly without a happy ending so far XP

E3 = Go through the wall on the right side

H5 = Fall to the left of the giant chasm

H+I 7 = There are invisible blocks which you can jump on indicated by the hanging chains above.

I play this while it was on the frontpage of Newgrounds. I sadly got bored near the end of it so I never did finish it.

I think the game would been more better if it didn't limit itself to the old style graphics. It started to hurt my eyes at one point which was the main reason why I quit. The time spent didn't really feel that rewarding when you spend most of it backtracking searching for that single key that you couldn't get because you had to go in from the right not the left but I could have dealt with that if the graphics wasn't so boring.

Even NES games had animation and background objects. I think he only use that style out of laziness if anything but I don't know the creator and I'm not the type to just assume such negative things.

Would been better if you could choose to save the checkpoint at the grave or not. I had a grave mark near the top to make things easier for myself but accidentally touch one near the bottom when I try to jump over it. Killing yourself doesn't hurt you as far as I can tell so you can somewhat speed things up if you pick your graves.

so i'm forever doomed to chase the meaning of life? is this a no win situation or can we ever get the 13th key

Great game! I thought the graphics were perfect for this, it reminded me of the earlier games I used to play on my Commodore 64. In fact, when it all started glitching I felt like ejecting the floppy disk and blowing the dust out of the drive.

I also managed to complete it without a map... (Note to self, read reviews before playing games. When will I ever learn?) Even without a map I didn't feel lost or like I was backtracking too much and the save points were all in the right places I thought.

I'm going to try collecting the 12 keys and then the 3 hearts afterwards...

I saw it mentioned on one newgrounds review... its an interesting idea.

"The hunt for the keys, drives the character mad... which explains the effects and the ending"

May not be what the dev had in mind but its certainly an interesting idea for why it happens the way it happens.

So the meaning of live is a frustrating, glitchy ending?

not really. the scientist (or indiana jones, however you want to look at it) devoted his time to finding these 'magic keys'.

You decend into a dark cavern, facing unknown dangers, on the seek of 'ever awsome knowledge' or whatever is promiced by the keys.

You collect 1, ok. you collect 5, feeling really good. collecting 10, you start to feel frantic... I 'need' those other keys.

That, and if you go at it a second view

Your decending into a cavern, that has lain dormant for how long. how 'clean' is the air, who knows how stale, or impure that air is... could be toxic, so running around, jumping, and all that hard breathing stuff, make it so you can't see straight

It would have been nice if there were some checkpoints that let you warp around. Towards the end, there was some annoying backtracking that really didn't enhance the experience. At least the amount of backtracking was minimal.

The way you gain access to more areas of the ruins as you collect keys was a clever design element.

The ending was unusual, and I think kind of clever. It came across as lacking any particular meaning to me, rather, the dev just was looking for an unusual way to end the game.

Looking for the hearts was generally uninteresting, especially since the invisible platform heart takes so long to backtrack to reach if you miss a jump the first time.

All in all a good experience for the time spent playing it.

I was in the same boat as Dandy, not having read the comments or more than skimmed the review, and when the light went on, my confused chuckles turned into actual laughter.

In the tradition of oldschool metroidvanias [haven't we a better term than that?], this game is vulnerable to sequence-breaking. Using Ruesiken's map's notation:

Jump up+left from G4 into F4, do lots of random jumping up/right/left and walking left/right (most of which you will not be able to see yourself during), and end up in the corridor on the bottom of F3.

I was just wandering around trying to progress without using the map, so I am not sure what, if anything, this would gain you during actual play, but, hey, tradition, I guess...?