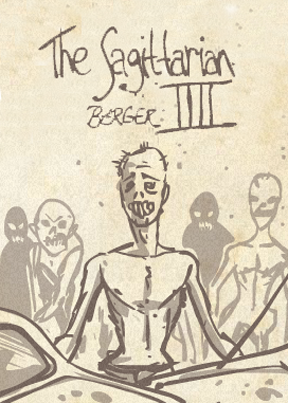 A favorite TV show with multiple seasons is a lot like a well-written episodic game. You follow characters through adventure and loss, happiness and sorrow. When good times come their way, you're up in the clouds with them and when they die, a piece of you dies as well. Of all the game genres out there, interactive fiction is arguably the best at really drawing out the emotions of the player in this way, and Hyptosis' Sagittarian adventure series is one of the best. Combining great artwork, funny and well-developed dialogue, and even a dynamic soundtrack, it's an experience that really sticks with you. And now fans and newbies alike can rejoice in the latest installment, The Sagittarian 4: Berger, which picks up from one of the four possibilities that ended the last episode.

Like previous installments, Part Four follows a group of survivors in a world taken over by the undead, starting as a visual novel and branching off into a choose-your-own adventure after awhile. Pick from two or three options to continue the story. If you die, you can go back a little ways or start over from the beginning. Unlike previous games in the series, however, Part Four is more focused in its story line and you can tell that Hyptosis is trying to keep the series from branching off into too many alternate realities and becoming muddled. Also, though we skipped the other titles due to their content, this installment really deserves to be played.

A more significant difference in Part Four, though, is that more is on the line. The small band of survivors are no longer strangers, but friends. Some are even lovers. Can we protect these people we've grown so close to over the last four games, or will we have to send them to their certain death for the good of the group? It's a choice that even great novels don't give you, stuck as they are in a single authorial vision, and it's what makes interactive fiction, and the Sagittarian series in particular, more than just a game, but art as well.

Unfortunately since this was featured in Link Dumps, there are no easy tags in JiG to lead to the earlier parts.

On the bright side, my search lead me to one of my favorite Link Dump Fridays. https://jayisgames.com/archives/2011/02/link_dump_friday_200.php

I liked this one quite a lot, but it was incredibly short and had no major offshoots (they all ended in a couple panels).

Incredibly bummed that I can't find a way to