The Secrets of Arcelia Island

As a child, Greta fell asleep every night with her head full of stories her father told about a mythical island replete with a thriving town of peaceful villagers, a lush forest ruled by a fairy queen and king, and a beautiful palace high on a snowy mountain—the fanciful stuff of childhood dreams, but pure nonsense. Or so she thought. After a storm-tossed shipwreck, she awakes three days later to discover not only her father and crew missing but that The Secrets of Arcelia Island were true all along in this gorgeous new adventure hidden object hybrid game from HitPoint Studios. Now, as Greta, you're about to come face-to-face with (among others) an elf, a satyr, and a power-obsessed sorceress who promises you death as you try to save your father and free the island from its curse. 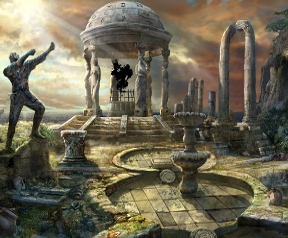 While gathering up resources to begin your mission, an eery shadowy mist appears before you but when you step closer, it disappears. "What!" You think, "Am I losing my mind?" Very possible: you did take a pretty big thump on the head during the tempest. Everywhere you go, the shadow seems to be there, taunting you or perhaps leading you toward your next destination. There are six distinct zones in and around Arcelia Island, and to gain access to each requires completing tasks, finding key objects, and solving puzzles. Use mouse controls to click your way around, the cursor changes into a hand showing an inventory item or picture story piece to pick up, a larger arrow indicating a scene you can travel, and a magnifying glass for inspecting landmarks and starting a hidden object scene or puzzle.

The Secrets of Arcelia Island's story progression is completely textual. There are no voice overs to jar you out of contemplative reverie or studious detective work; this is a welcome feature because it further enhances your ability to become completely absorbed into the island's mystical surroundings. The story is slowly revealed through cut-scenes and your character's internal thoughts as she encounters new locations, fascinating people, and intriguing artifacts. Glints and sparkles alert you to significant areas plus the hint/skip timer is a generous 30 seconds in normal mode; advanced mode has a longer timer and no helpful alerts. On top of the main quest, after you obtain your father's journal, you'll start an optional side quest to find 42 missing story page pieces; finding every one might be tricky if you're not keen-eyed. When you reach the end of the story, you can't return to certain locations to gather up pieces you might have missed, so take care to seek them out as you go along. 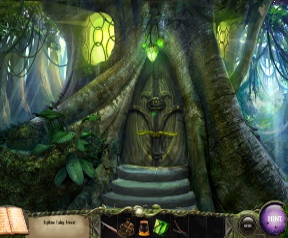 Analysis: The talented team behind Guardians of Magic: Amanda's Awakening manage to do what too few can: draw you into a fantastical and surreal world with convincing realism. The naturalistic artistry is so good at weaving atmospheric traits into authentically believable worlds, you might be reminded of MYST: Masterpiece Edition. Each location is gorgeously rendered, blending graphics and animations to achieve such details as flies flickering about a corpse, clouds floating across the sky and a butterfly fanning its wings in the sunlight. Environmental sounds such as a breeze rustling the trees or seabirds calling in the distance fully absorb you into the magnificent world of Arcelia Island. (Be sure to turn on the high quality video in the game "settings" for the best effects.)

At a little over four hours for the average player, The Secrets of Arcelia Island is a good balance between puzzle solving, story, and hidden object scenes. Each hidden object scene is neatly composed, bright and clear, making the search for most objects on the easy side (although that hint button will be very tempting at times) and very pleasant. Most of the familiar puzzles pop up as well, changed slightly to fit the mystical island theme and—aside from a few puzzles that will test your deductive reasoning—both the puzzles and the hidden object scenes are on the short side. With such beautiful surroundings, though, you wouldn't want to be held up with vexing enigmas every turn you take. 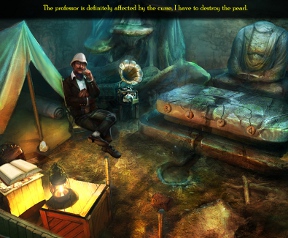 Expect to do some backtracking and crisscrossing of locations as you gain more inventory items to put to use. If you tend to click through the story scenes too quickly, you could miss a lot. That said, the story itself is a bit sketched in, which probably comes from the story's protagonist having little information herself and may make you feel in-the-dark as well. The climatic ending leaves more questions and only "To be continued" after the credits as consolation.

What might be considered a boon to some and a drawback to others, clickable areas are very precise. A great source of information, the journal keeps track of important clues and records story details as they're revealed but controls are more difficult on the journal's story pages; placing and turning the picture pieces takes deftness and patience. Even so, the addition of this side quest provides additional gameplay and is a nice treat to go back to at the end of the game. Overall, The Secrets of Arcelia Island is an experience in sumptuous environments, beguiling scenery and affable puzzles. Take time to let yourself be drawn in to a realm that mixes fantasy and mystery, surrealism and substantive locales.

The Secrets of Arcelia Island walkthrough

Getting To The Fairy Forest

The Altar And Green Pearl

The Secrets of Arcelia Island walkthrough

Getting To The Fairy Forest

The Altar And Green Pearl