The Sun and Moon

Dualities exist all throughout nature. Confucius knew it, Hermann Hesse knew it, and you bet Obi-Wan knew it too. Now developer Daniel Linssen, alias Managore, has transformed the concept into the exceptionally unique platformer The Sun and Moon. Taking first place in Ludum Dare 29, the game embraces its theme of "beneath the surface" with style, forcing the player to move not simply on top of platforms, but within them as well. The [arrow] keys or [WASD] will move the teeny ball of concentrated cuteness you control, with [shift] or [Z] allowing you to delve into the ground and through the dark-coloured platforms. Your objective is to collect the three Shinies and reach the wormhole to beat each of the levels. You'll be fighting gravity to achieve this, whether it's the familiar ol' downward pull, or the reverse gravity inside the walls, which seeks to thrust you high into the sky at alarming speeds. 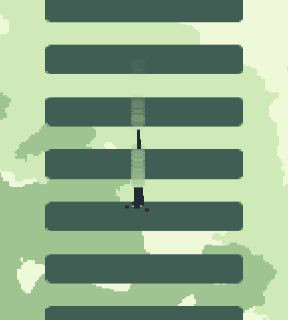 The premise will remind many of "burrowing" games of the past—remember Death Worm?—yet the physics and atmosphere couldn't be more different. The unique controls and movement certainly takes getting used to, but are very responsive after some practice. The pale blue-greens and neutral greys which comprise the game's simplistic colour palate are evocative of a classic game boy game; the rolling clouds drifting through the background are both pretty and relaxing. This in contrast to the often spike-happy level design, which provides a challenge to the most experienced of platform gamers. The Sun and Moon is not designed to frustrate, however. You may play any of the thirty levels from the outset, skipping the tougher stages as you see fit (I shudder at the thought of completing level 28 again). Perhaps the most frustrating part of the game is its grating, repetitive background music, but thankfully there is a happy little mute button included at the upper left, one of Linssen's only concessions to interface.

With only thirty short levels and no narrative or characters to speak of, The Sun and Moon is predictably short, but an astoundingly impressive feat for something made in only 24 hours. The focus here is on the strong gameplay, demonstrating that with an interesting mechanic and solid execution, newer games can be fun and addicting without the need of fancy graphics or packed-on "extras." It feels great to play, and even with no ending you will depart feeling both rewarded and excited for the prospect of a more fully fledged sequel in the future. Up, down, dark, light, sun and moon... take a moment to appreciate the duality inherent in nature. Or, you know, just play a really rockin' indie game.

Play The Sun and Moon

I don't get where the name comes from.

I thought 14 was the hardest so I skipped it and when i came back to it it wasn't as hard as I thought. 28 wasn't so hard. It just needed some crazy precision upsy downsy sidesy widesy action.

Get the bottom shiny last. Just try to get to the top one. I never got to the top without hitting the middle shiny, so I think just trying to make it to the top by snaking around the stars gets you the middle one by default and an easy jump over the top gets the top one and the bottom one you can get with a simple run through.

That's perhaps the best possible way to describe that level! :)

I think that the name comes from, you are the moon normally, and become the rising sun when you enter obstacles.

Where is the portal??

Power of posting--I found it. In case anyone else is having troubles:

When you launch yourself in that column to get the highest moon (I'm assuming that's what you're collecting), go as far to the left as you can.

This was a genuinely fun game.

This is entirely what Ludum Dare is all about!

What a fantastic rewarding game (and quite tricky - still maddeningly stuck on 28 as the last screen to clear!).

Congratulations Managore, and thank you!

Interesting game. Very impressive for a HTML/JS game. I'd like to see more of this.

A post-jam version is coming to Steam on October 31. I'm super excited, even though I absolutely suck at this game and haven't had the will to get past level 5. I am thoroughly impressed at how solid the design is for a game in forty-eight hours. It definitely deserved its high rank.