The Sun for the Vampire 2

Who says vampires are always children of the night? Not Eyesteam! The plucky protagonist of The Sun for the Vampire is an adorable little wraith who's grown tired of the nightlife; he just wants to see the sun without worrying about a killer sunburn. And since his previous excursion in learning how to day-walk didn't work out so well, he's back for another platform game challenge in The Sun for the Vampire 2. At the behest of an old wizard, he's plumbing the depths of a brand-new dark and spooky castle in search of the secret to vampire sunblock, and this time, he'll be putting his noggin to the test! While his last adventure was a foray into high-difficulty platforming, this castle brings far more puzzle elements to the party. Use [WASD] or the [arrow] keys to move around. The vampire still can't jump; instead, he uses the up [arrow] or [W] to turn into a bat and fly around. But all the flying he did in the last game must have tired him out, because now, he can only go batty for a limited time! On the upside, he's been working out, and can now lift and throw boxes using [S] or the down [arrow]. He'll have to cleverly flip switches, toss crates, and even figure out how to use his deadly enemies to his advantage! So although there are still plenty of wooden stakes and silver knives in his path, this vampire's second outing feels like a surprisingly different game from his first. 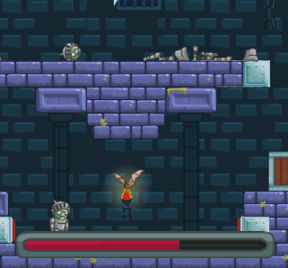 The Sun for the Vampire 2 does exactly what a good sequel should do. It expands on, and refines, the concepts of the original while taking them in new directions. The first game did have a few minor puzzle elements, but largely focused on precision flying segments. Due to the limits placed on flying in this game, those parts get cut down in size, while expanding the block-pushing and switch-flipping. For those who had trouble with the bat's inertia-intensive controls in the first game, this is quite the blessing. However, these portions still remain very tense, as you'll have to make sure to land safely before your flight runs out! Because there's fewer flight gauntlets, the levels as a whole have gotten smaller and sorter, which means you'll lose much less progress when you die or reset. The puzzles are largely box-oriented, focusing pushing and throwing large crates around, but the game shows a surprising amount of creativity in the number of things it does with that single mechanic. Crates can be used as weights, stepping stones, weapons, and even shields! And although they can be failed, many of these puzzles are surprisingly generous as well. They'll often give you several boxes to work with, so you can lose or break a few before needing to restart. The physics can be a little finicky, and finding exactly the right spot to toss a block from is trickier than it should be. And of course, your bat form still takes an awful lot of practice to learn to properly control. But The Sun for the Vampire 2 goes to lengths to make itself much fairer, while still providing plenty of challenge. Add in a pinch of innovation, and you've got yourself a truly polished follow-up. How's that for a ray of sunshine?

Play The Sun for the Vampire 2

As good as the last one, a few of them are headscratchers at first.
It hasn't got the same "must get everything" factor the first one had as some of those gold coins are in just suicidal places to collect.

It was entertaining at first, then mildly annoying due to either the controls, or myself.

What I mean to say is, I was about 90% of the way through a level and then 'died' because I didn't transition from floating to bat quick enough and fell through a hole. And I'm a tiny bit annoyed by that.

Can you not go straight from floating to flying? Because I can't seem to.

Your power of posting didn't help me any. Any hints?

1. Don't try "stacking" the metal box on the wooden box. I don't think that will work.

Is that enough? You still have to be very careful and precise. Even when I got the buttons pressed I still died a million times at the top. It's entirely possible there's an easier way. Also I kept running into a frustrating clipping glitch that would frequently mess things up, and I'd have to restart.

Push the wooden box into the corner on the left. Push the metal box down off the ledge; now push it all the way to the right so it sits on the far right button. Fly back (picking up the coin, if you like). Now pick up the wooden box and walk up to the right-hand edge of the platform. Throw the wooden box. It will tumble right across the middle platform and land on the second switch. It should be easy from here...

...but if not: from the starting position, fly left under the overhang. Rest on the bottom-left platform, then fly to the top. Carefully nudge the box through the blade so it topples onto the switch. The rest is a clear line to the exit; fly carefully, tapping the UP button once each time.

It's a decent little game: the controls can be a bit frustrating sometimes, but then that's kind of the challenge.

FYI: the coins do literally nothing. I got them all and the ending was the same. I say this because while Level 30 is totally doable, getting the coin is ridonkulous. It took me about an hour to get that coin (I hate being 97% complete!), and I was pretty ticked that it didn't unlock anything.

I have to say, I love the squeaky little "oh, no!" when you die.

I'm all done except for the coin on Lvl 27. Youch. Any thoughts?

@silent george: it doesn't appear in my save anymore, but IIRC it's in the nook with the spikes on the floor and ceiling, just after the first crusher. Let me know if that's not right.

I found the best way is that once you're in flight, tap UP to "jump," rather than floating continuously. It reduces the risk of hitting the ceiling spikes and gives you more control. Just think of it as jumping rather than flying and it seems more natural. Jump in, get coin, jump out. (Get crushed returning to platform, curse, repeat.)