The Timebuilders: Caveman's Prophecy takes us back to a gentler, simpler time. A time when man was in tune with nature, a time when there were no worries about mortgage payments or electric bills, a time when humans and dinosaurs got along (ok, we're not going for historical accuracy, here). This fantastic and frantic new time management game (and sequel to The Timebuilders: Pyramid Rising) by Wendigo Studios takes you back to the days when we lived in caves, when men were men and women listened to talking eggs. Seriously, just go with it. 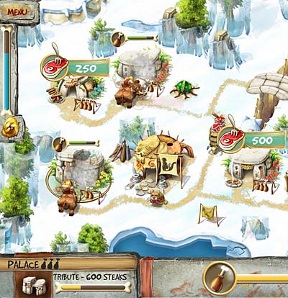 The story begins when our protagonists find a lovely large black egg with tasteful yellow stars on its shell. The egg immediately begins to give advice about building a civilization. The first step? Get out of the cave. Sounds pretty easy, but as you play you will find that there are problems, such as the large tyrannosaurus rex blocking the way out. It is up to our intrepid ancestors to figure their way out with a combination of hard work, inventive thinking, and lots and lots of advice from that egg that never seems to shut up.

The Timebuilders: Caveman's Prophecy is a time management game in the vein of Build-a-lot. That is, you have empty lots and paths connecting them and you must decide what to build on said lots in order to achieve the particular goals for that round. You begin by building small huts which house cavemen, and the cavemen pay "tribute" (a.k.a. rent) in the form of steaks for being allowed to live there. Steaks are collected by cavewomen who speak loudly and carry very large clubs. Steaks can buy things either from the pick-a-rock (quarry), the markets, or later in the game, ports. Rocks can be collected on the ground or bought or traded for to build bigger and better houses and other buildings. All pretty standard so far, but then the game throws in a few curves with things like special eggs, upgrades, and gadgets. 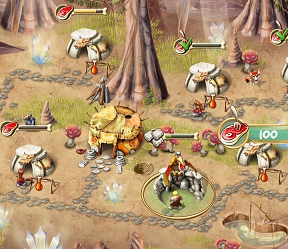 You begin rounds with a certain number of workers, steaks, rocks, and, later, eggs. The eggs affect strategy greatly, as each egg produces a different commodity at a different pace, and each requires an empty lot to incubate. Should you use them up at the beginning to stock up or should you wait until later when you need something? The strategy changes from challenge to challenge. The game really gets going when you add in the markets (run by monkeys) where you can trade stone for steaks and the ports (also run by monkeys) where you can trade whatever the monkey wants to trade for whatever he has in stock (steaks, rocks, eggs, extra men, etc.). Then it really gets a little crazy when they add in nasty carnivorous plants that block your paths, giant venus flytraps that can be opened for treasure, and lazy crocodiles who just won't get out of your way without a little persuasion.

The strategy of what and where to build, where and how to spend your money, and which upgrades to go for first are pretty involving. Finish a level in expert ("flystone") time and you will receive a lovely bonus piece of amber with a fly in it, which helps you build up a model village for all the other tribes to admire. Keep at it and you will have eventually discovered civilization.

Analysis: Wendigo Studios has hit a home run with its combination of frantic time management gameplay, nice visuals, and hilariously historically inaccurate animations in The Timebuilders: Caveman's Prophecy. So much thought and detail has gone into everything: gameplay, backgrounds, music, and characters that make The Timebuilders: Caveman's Prophecy such a joy to play and not just another Build-a-lot knock-off. 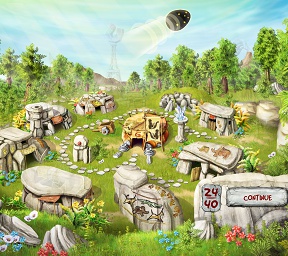 The graphics within the gameplay itself are flat-out unbelievable, from the extinct creatures who hover around your campsite and make funny noises to the cute but annoying saber-toothed kittens who keep trying to steal your steaks (and who add yet another layer to the gameplay). The animations of the monkeys who run the markets and ports, the mammoths your cavemen ride (if you upgrade to them), and the plesiosaurs who pop up to talk to the monkeys are all unbelievably amusing and smoothly integrated. The sprightly background music sets the mood and the other sound effects including the animal noises brings it all home. Basically The Timebuilders: Caveman's Prophecy is a treat for the eyes and ears.

What sets The Timebuilders: Caveman's Prophecy apart though is the gameplay. The learning curve is smooth, easing you into each concept at a nice rate that makes it easy to pick up the strategy. The twists provided by the eggs, the markets, the ports, the kitties, the carnivorous plants (who look a lot like Audrey II from LIttle Shop of Horrors) make for some frantic play in the later rounds. And with 40 regular rounds plus bonus rounds you are looking at hours and hours of gameplay, especially if you want to go back and keep trying to get expert on each level.

If there is any criticism to level on this fantastic casual game it would be in the cut-scenes. The characters there are cartoony (and occasionally just plain silly), and the dialogue consists of gibberish "caveman talk" with English text translations across the screen. Fortunately, you can click quickly through or skip the cut-scenes altogether if it all gets a bit much.

Forget the minor flaws, though. If you love time management games in the build-a-lot mode then there is a lot to love in The Timebuilders: Caveman's Prophecy. Fast, frantic, and fun this is definitely what casual gaming should be. Have fun building civilization and shaking the devil out of those mischievous kitties!

Though the graphics and animation really are charming, this still feels to me like a cut-rate Royal Envoy. It's a great formula, but why would I want to play the same game again? Other than the eggs, which are pretty clever, there don't seem to be enough gameplay twists here to justify an entire new game merely set in a different time period.

I know this approach is par for the course in the casual game market, but I wish these little developers would go beyond just hiring a good artist, and actually get a game designer on the project.

As Royal Envoy and My Kingdom for the Princess and lots of other games have proven, it is possible to innovate in the time-management game field. Companies like this one just don't bother.

Oh yeah, I tried out the demo for this game a while ago. I found the story/dialogue and gibberish noises unbearably stupid. Honestly, it ruined the game for me.