The Tribloos is a new time management game from Bumpkin Brothers, creator of the 3D assembly line puzzle game The Machine. Similar to the Roads of Rome series and My Kingdom for the Princess series in basic structure, Tribloos will surprise you with its knack for turning simple tasks into more complex levels. Do not let the game's simple visual presentation fool you, this game is filled with serious amounts of smart challenge! 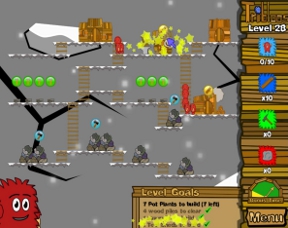 Trey is the leader of the Tribloos, a tribe of furry blue creatures with tiny little hands, big eyes, and staunchly persistent smiles. A storm recently crashed through the forest of Tribloo Island, destroying everything in its path. The Tribloos are hard workers, but their organization skills are somewhat... lacking. Who are we kidding, they couldn't plan their way out of a paper bag made out of a blueprint. Who can help them get their village back together? Who is awesome at organization? You are! You are!

Working with the Tribloos in this 2D side view game is as simple as clicking the mouse. Your main concern will be dividing available workers between tasks in an attempt to fulfill goals listed at the bottom of the screen. Click an icon to assign a worker to that job. Keep clicking to add more workers (if available) and the job will get done faster. You have to clear piles of wood in order to open paths to the rest of the level, a task that also earns resources used to repair buildings. With wood, you can build things like houses and sawmills, the former providing more workers, the latter more wood. 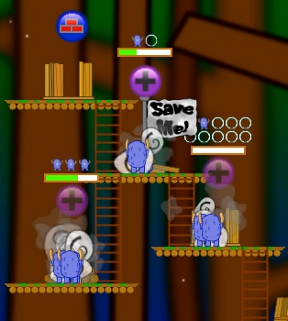 A series of themed levels progress The Tribloos' story along as well as introduce new gameplay elements you can work with. Nothing too complex, of course, but just enough to make you think "oh hey, that's fun!" Rescuing trapped Tribloos and gathering tools so you can clear piles of rock are just a few examples. There's also a mini-game or two to play in-between worlds, but you can skip them if you're not interested in the diversion.

Analysis: The Tribloos is quite a surprising game. From looking at it, you wouldn't expect much out of a game with dated visuals and flat characters. Once you play it, though, you'll quickly become engrossed in the game's cheery spirit and challenging gameplay. The Tribloos is one of those time management games you can blaze through in several hours, but earning all of the achievements and getting the best time score in each level is a difficult feat to accomplish.

Most modern time management and road building games (Royal Envoy, for example) dilute the central theme by adding layers of complexity to the gameplay. Not only are you managing workers, you're also thinking about half a dozen resources, looking at the clock, keeping an eye out for random events, and so on. The Tribloos is refreshingly streamlined and goes without those "features" in favor of simple, pure time management gameplay. You really have to manage your workers smartly if you want to walk away with a good score.

Don't let the game's lack of visual flair deter you from trying it out. The Tribloos is a lengthy and challenging time management game that dares to do something different from the glut of building-related titles out there. Give it a go and see if you get hooked!

This really was a cute game. The graphics aren't as smooth as other similar time management games, but it's a sweet time-waster.