The Trouble With Robots

Oh, how I long for the halcyon days of tabletop gaming. The gathering together of friends and commiserating over cans and cans of Mountain Dew and pretzels. But, alas! If you are reading this and happen to be over the age of 22, you have probably found this nostalgic little pastime hard to organize. If you're over 30, than, well, it's just about impossible. That's why I love games like Digital Chesnut's The Trouble With Robots that combine card game elements with strategy and defense, along with cool graphics and awesome battles with a minimum of fuss and muss that even the most aged and busy gamer can enjoy. 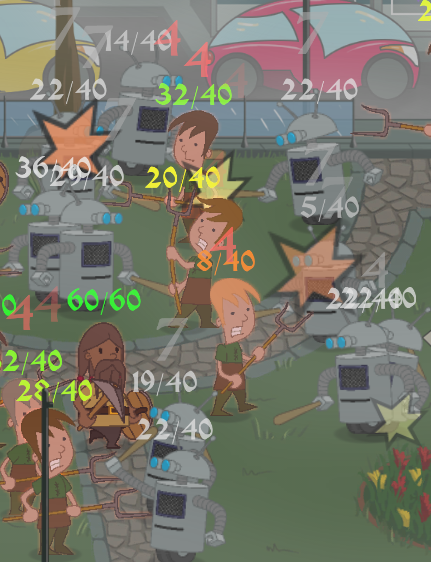 In the medieval fantasy world of Trouble With Robots, robotic lifeforms from outer space have come to turn the world of Middle Turf upside down, destroying old villages and replacing them with futuristic highways and strip malls. You'll have to build your best deck full of spells, powerful trolls, dwarves, and elves (not to mention angry pitchfork wielding peasants!) to stop the invasion and bring peace back to the land.

At the start of each level, you choose a set cards to use during the battle to come. Cards range from basic "create two elves" or "summon three peasants" to mid-range cards that will supercharge your stats and give short-term upgrades to your melee score or ranged weapons. Finally, there are the really powerful cards, ones that can be used more than once that involve magic and can be combined with other cards to make some pretty satisfying combos.

Each level yields stars that go towards unlocking more cards for your deck. Even if you play a particularly hard level over and over, you will still get some stars for your trouble. And The Trouble With Robots thankfully gives you a number of bonus levels (marked with blue on your in-game map) that, while nearly impossible to beat, will earn you lots of stars.There's also a fairly compelling story behind each stage, filled with the usual trappings of invasion dramas: the fledgling resistance, struggling for its very survival against vastly superior foes, quisling peasants who join the invaders instead of fighting, and even interspecies dwarf-elf love! Thankfully, the story elements are brief and to-the-point. They're even pretty funny, and don't detract much from the straight-up battling, which is at the heart of the game.

Analysis: Don't be afraid to play on Hard right from the beginning, the game is just challenging enough not to be frustrating. Also, the choice of cards, forty in all, is great. There were only a few that were "meh"-worthy, and even those would appeal to certain gamers (those that like to play with trolls, for example), and aren't bad in their own right. It can be pretty exciting waiting to see what the next card will be and the game does a great job of upping the ante with each new one. The Trouble With Robots is a lean little card battle game that picks a few elements and does them right, rather than trying to juggle more than it can handle, leaving you with a satisfying experience that you can come back to and improve, even if you are a gamer on a time-budget.

The artwork looks great! Going for a peek now.

The gameplay is fun, but the regular difficulty is pretty darn easy. However, the blue challenge levels are super hard at the end. I beat the game in about 2 1/2 hours, but I've spent a long time trying to beat the last challenge level.

If you liked the game on Windows but thought it would be better on the go, Trouble With Robots is finally on mobile platforms (iOS/Android) with updated gameplay and graphics.