The Wizard's Pen is a fun, breezy twist on the hidden object genre by Pop Cap, maker of Peggle and Bejewled Twist.The Wizard is missing and, with the help of his magical pen, you must conjure up all that is hidden to find him! 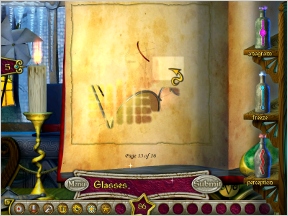 Your main task is to go through the Wizard's books, filled with blank pages and, with as few strokes of the magic pen as possible, guess the image that starts to materialize. The fewer clicks you use to guess the more stars you get, advancing you faster through the game. Collect enough stars and you will unlock the wizard's special sketchbooks. After each completed book, you search around the wizard's tower through cluttered rooms that appear as standard hidden object puzzles. Your real task is to find the bits of the objects that are missing and magically restore objects with the wizard's pen.

There are many books to get through, each with its own hidden theme. There are a handful of variations of visual puzzles to keep things interesting, so you won't always just click to reveal portions of the image. There are several special challenge puzzles like scrambled mosaics that become more organized, zoom-outs, abstracts and untwisting of the pictures to bring the objects into focus. One challenge erases the previous guess, so you have to remember what you saw. The number of chances you get on each page of the book is indicated by the burning candle. You must make the correct guess before the candle is snuffed out!

As you advance, you will unlock magic spell potions that are used as different types of hints to help you through the books, like the power of perception which will let you see much larger blocks of the pages, or a crystal ball spell that will reveal a jumbled vision of the next few images you have to guess. You get to select up to three potions for each book. New potions become available as you go along. Each potion is only for a single use, but you can select the same potion again for a later book if you find it useful. Mouse over each potion to read what it does. 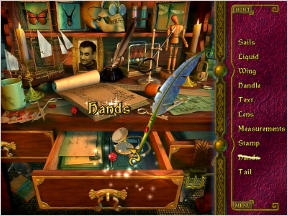 Analysis: You can always count on Pop Cap to have strong production quality and enjoyable gameplay. The graphics, art and sound were all quite good. The twist of finding the missing objects makes this game stand out from the endless sea of hidden object games. It can be a bit repetitive, and in particular it would have been good to have more locations for finding objects. The mini challenges do a good job of breaking up the repetitiveness of the sketchbook puzzles.

The game has a high tolerance for how you enter your guesses in the book puzzles. For instance, if the object is sunglasses, and you write glasses, your answer will be accepted. Misspellings and synonyms for the objects work too, which is pretty impressive and keeps the game moving quickly, as you don't get stuck having to be too exact. Things can get a little tricky when you are trying to figure out what's missing in a location, because the word clues provided can be cryptic. Especially if you don't know the names for the items that you can't see to begin with! Some of the clues have clever multiple meanings as well. You might need a hint or two in these sections.

This game may feel too easy for some, but the frustration factor is low, so most of you who like the normal hidden object games will get a kick out of The Wizard's Pen.

Here are solutions for the Wizard's Pen puzzles.

To consider: Since the themes for each book aren't revealed until after the final puzzle in the book is completed, some people might consider the theme itself a spoiler, so I hid them.

Personally I think that the themes are helpful as a hint guide — since it's a clue to what you might be trying to uncover. So, if you need a nudge, but don't want to necessarily reveal the direct answer, you might check the theme out first. :)

Things in Your Pocket

I'm really glad to see such a clever twist on the hidden object genre. Very different and a lot of fun to play! :)

Here are solutions for the Wizard's Pen puzzles.

To consider: Since the themes for each book aren't revealed until after the final puzzle in the book is completed, some people might consider the theme itself a spoiler, so I hid them.

Personally I think that the themes are helpful as a hint guide — since it's a clue to what you might be trying to uncover. So, if you need a nudge, but don't want to necessarily reveal the direct answer, you might check the theme out first. :)

Things in Your Pocket

I really think the "solutions" are unnecessary.

It's not like the game presents some puzzles which you have to solve, those are just images which you seen in the end anyways. So you can use these solutions to cheat (which is rather pointless) or.. well, that's it. You can use them to cheat.

It's like posting screenshots of hidden object games scenes with pointers where the objects are. The entire game is finding the objects, so what's the point?

P.S. Oh, I see the "walkthrough" even has the screenshots. *sigh*

[Edit: We understand and appreciate that some people would rather solve puzzles on their own, but many people come here for help and we hope to provide thorough and concise walkthroughs for those who wish to use them. Thanks for your feedback! -Pam]

I understand, but the solutions for this particular game is rather like this scenario:

"Hey, Johnny, do you want to play pantomime with me?"

"OK, I will now show you three movies in mime. By the way, the answers will be Godfather, Aliens and Titanic."

But ok, I'd rather have pointless walkthroughs too then miss them on the games that really need them. :)

Here's the 2 missing information that I have found:
Wizard Cookbook: Only thing is missing is the blender and that comes on page 3 but the others are correct. Stool is the 4th, etc.
The Sketchbooks:
Minitures: The 2nd image is seashell.