This is Not a Minimalist Game

Made in just 48 hours for Ludum Dare's Minimalism competition, StormAlligator's This is Not a Minimalist Game is a retro-sy adventure that looks ordinary until a curse downgrades your high-tech world into something much simpler. And all you wanted to do was chop off his head to complete your quest... how rude! Use the [arrow] keys to move and jump, [X] and [C] to select dialogue options, and the number keys to select items or open your map. You'll need to think outside the box in order to restore the world... which is going to be tricky since boxes are all you get. To begin with, that is. 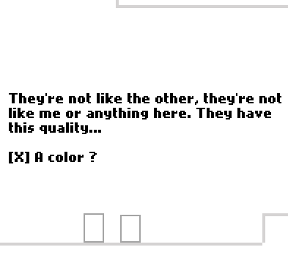 Though ultimately a short game, which is to be expected given its teeny-weeny development window, This is Not a Minimalist Game is fun and satisfying in the same sort of vein as Evoland... albeit with even less bells and whistles. It might even be a bit too simple for some players since the story is somewhat underdeveloped to go with the gameplay, though the ending has a cute twist that feels like a punchline. It may approach the competition's theme from a different angle, but This is Not a Minimalist Game has a neat idea that begs for more fleshing out in the future... although that would probably break our poor protagonist's mind even further.

Play This is Not a Minimalist Game

This is Not a Minimalist Game Walkthrough now available!

"This is not a minimalist game" Walkthrough:

In a few of the puzzles in "This is not a minimalist game", you sort of have to guess what the developers were thinking. I've tried to make the hints as non-spoilery as possible, but even getting a nudge in the right direction might make finding the solution a little less satisfying. If you'd really like to avoid spoilers, read the tips first.

There's one area of the game that players who have difficulty distinguishing colors might have trouble with. I'm not sure if I needed to, but I provided a color note.

"This is not a minimalist game" Walkthrough:

In a few of the puzzles in "This is not a minimalist game", you sort of have to guess what the developers were thinking. I've tried to make the hints as non-spoilery as possible, but even getting a nudge in the right direction might make finding the solution a little less satisfying. If you'd really like to avoid spoilers, read the tips first.

There's one area of the game that players who have difficulty distinguishing colors might have trouble with. I'm not sure if I needed to, but I provided a color note.

Actually, I think the moral is more that

change is scary, but exciting, and ultimately worth it. The NPC who began life as a simple square was the one who responded to everything with cautious optimism and ultimately kept change coming, and I think if the moral exists, it's probably just that not every new experience should be met with fear and babbling. :)

This game makes me want to re-read Flatland. Very nice!

The game isn't working on Firefox or Google Chrome for me...

@icalasari, it works fine on Firefox for me. Doubt that helps though.

The real moral of the story is Ludum Dare is AWESOME and so is this game!

(I may not have a tight grasp on what morals are...)

Yeah, a little problematic on Chrome for me as well. Not sure what command you are supposed to give in order to "use a sign" on a square. Nothing works. But I definitely liked the idea.

To use an object in your inventory, press the number associated with it. 1 opens the map, 2 drops a square, etc.

I didn't spoiler that because it's a basic game mechanic / interface thing, and thus something the designer presumably intended not to be a puzzle to be solved. If Jay (or Dora, or StormAlligator...) feel differently, though, I wouldn't be offended if spoiler tags were added.

Especially for one made under such serious time constraints, this was a fantastic game! A nicely different otherworldly adventure.

I needed the walkthrough for the penultimate puzzle, which I think ought to have been better-hinted.
Also, I believe I found a bug with that puzzle which functioned as a red herring and kept me off-track:

(To be clear, I'm referring to the mirror puzzle, not the coda one.)

When I drop the "This is not a square" sign in front of the mirror, unlike all the other items, it can be picked back up... but it's the reflection-side sign that disappears! This led to me thinking the object was to make the reflection not match my side of the mirror. Of course, the bug only seems to affect that one item, so I hit a dead end.

Maybe I was the only one who ran into that bug, or the only one who followed it on a wild goose chase. But -- if you'll forgive the pun -- the bug seems to me to disrupt the symmetry of the game.

Granted, the bug in question made that puzzle seem more complicated than it was, and that colors my view of the puzzle's difficulty. But I found the solution different enough from the previous puzzles' solutions that that alone might have been enough to stump me.

I perceived the game as having more of a set of observations about human (or wizard, or polygon) nature than a moral per se. And that's just fine by me. It definitely made me think!

Short but pleasant. Perfect for fiddling around with during breakfast. Good concept and the puzzles are simple enough

except the mirror which is strangely specific.

I also thought that was how the inventory worked. But when there were two items with the number 2 next to them and two with the number 3 next to them, it seemed to be a toss up which one actually dropped--and since there was no way apparent to toggle between them, I was unable to go on. So it seemed more of a bug or perhaps a browser issue than a game mechanic. Thank you for your sarcasm, tho.

Nothing I said in my comment above was intended as sarcasm, dsrtrosy.

I, too, found the inventory / use-item controls unintuitive at first. I perhaps over-explained, but I had in mind that lots of other players, both now and in future weeks, months and even years, might come to this page if they were stumped by those controls. That's why I worded my comment the way I did. Most people who visit a review / walkthrough page on this site never leave a comment, and it's rather unlikely that the two of us were the only people who would ever be confused by the inventory display or controls of this game.

At the risk of offending you ('you' here meaning dsrtrosy, specifically) again, even though I found the double numbers confusing at first as well:

Also, in most cases, a dropped item can simply be picked up again, should you ('you' here meaning anyone playing this game, generally) drop the wrong one.

Weird problem on Mac OS X 10.8: the game displays its title screen, then asks me to download the latest Flash Player, even though Flash is already up to date (version 15). This happened in Chrome 37, Safari 6.1.4, and Firefox 21 and 32. I suspect there's something wrong with this game's Flash version detection routine.

The game that everyone is trying to play is more of a thing on resume planet reviews and there is nothing wrong about it. I need to ask people how they are doing it and then we can figure it out from trat.