It's a story as old as time itself: Boy finds sword. Boy stabs monster with sword. Boy rescues girl. Boy and girl go out for coffee or something. But what if things happen in the wrong order? What if the boy accidentally stabs the girl, or trips on the sword while walking hand-in-hand together? What if the monster reaches the girl first, accidentally scorching her in the process? What if the boy tries to stab the monster, but finds he has no sword? (Hint: scorching?) Such are the scenarios considered by Tiled Quest, an HTML5 sliding block puzzle game developed by Team Doa Ibu, made up of Alif, Rosanqodrian, Novel Apriaji, Rino Adi, and Anto Febian! Visit the creator's site at Tempa Labs! 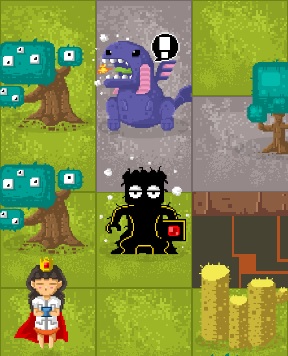 Using the mouse, you will move the various green tiles on each level around the immobile grey tiles. Specifically, you must arrange things so that the knight tile becomes adjacent to the sword tile (to pick it up), then the monster tile (to defeat the beast), and then the princess tile (to woo her). It must be done in that specific order. Otherwise, the quest will end in failure. There are a couple of safe combinations: the sword next to the princess or the monster, for instance, but most of the time deviating from the narrative will mean game over. It's probably easier just to experiment a little bit: plus, the bits of art you get for each variation of failure are worth the restart alone. There are four worlds of five levels apiece. While the general goal is simply to survive each level, you are granted stars for doing it in as few moves as possible, adding a nice chunk of replay value to the experience. With it's nice mix of iconographic pixel and hand-drawn artwork and simple, intuitive gameplay, Tiled Quest is an enjoyable little time-waster that can be jumped into immediately. A few more bells and whistles would be nice: the ability to undo individual moves, especially after a game over would've definitely removed some of the frustrations inherent to the Sokoban genre. Overall, though, Tiled Quest has charm aplenty to keep you sliding to the very end.

Interesting game, but I think the mechanics would work better with either arrow keys, or on a mobile/touch screen.

I can't seem to get past the title screen. The title just keeps smashing into the screen. click on the play button or the info button does nothing. Safari on OS X Mavericks.

Why can't she kill the dragon with the sword as well????

I can't figure out how to get pass stage 19. Posting power please!

Ok. As soon as I wrote the above line. I figured out how to get pass it. Now it's only a matter of how to get the stars

Let me try and see if I can help you out. Please note that the following bit follows a Battleship coordinate system, where Letters are the y axis and Numbers are the x axis. Also, [P]rincess, [D]ragon, [K]night, [S]word.

Oh, and if you thought this was hard, try level 20. It's a complete mess since the dragon is 3 squares long, and you have to go around the dragon to get the sword. Oh, did I forget to mention 2 square trees, a princess that forces the player to play carefully, and a sword and dragon that can't move?

I don't even remember how I got 3 stars with that monstrosity.