If Kairosoft ever made a version of Gilligan's Island it would look a lot like Tinker Island, the free survival crafting role-playing game from Tricky Totem with in-app purchases. When you and your intrepid crew are stranded on a tropical island you'll have to use all your skills to survive, try to get back home, and solve the mystery of just what's going on here in the process. Gather resources, build and upgrade buildings, stave off hunger, craft tools and buffing items, fend off the local wildlife, improve your party's skills and solve puzzles and logic problems, all while advancing the plot with choose-your-own-adventure format multiple-guess choices that meaningfully affect how the each game will take shape. 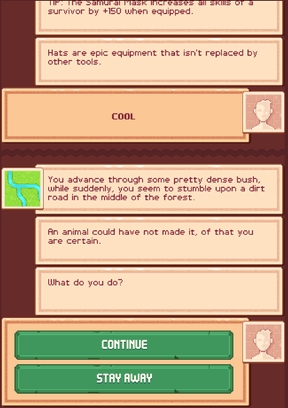 Each member of your crew has different strengths and can become an asset when applied effectively: Some Explore well, others Produce, while some Build and still others Fight. The game's slick graphical interface presents each crewmember as a card that you can swipe onto appropriate tasks, which are completed once their progress bar has maxed. This is the part where we find out which of you read our reviews and who prefers to just start playing a title immediately. Ready? Regardless of how many crewmembers you assign to a task, each try at it requires a certain amount of time to accomplish. The length of these timers varies based on the task at hand — constructing buildings for example usually takes the longest. These timers can sometimes last for quite a while — nearly an hour for some tasks, with multiple attempts needed to complete it. Some readers are likely to call foul, decrying it as just an aggressive attempt to sell Gems. Those are the in-game currency bought with real money that can make these timers vanish, among other things like unlocking new characters, buying spiffy items and filling your stockpiles of resources. But we've found that if you tough it out, before too long the game provides you with a means of drastically reducing these timers a few times per day allowing for almost normal play. Tinker Island will readily save your games to the cloud, and doesn't demand that you're online in order to play it. This free survival game features a massive landscape with enough areas that it will take weeks to explore. Will you be able to sort out what's going on with this eerie island and make it back home?

This is an excellent game. I would recommend it to anyone.