What could be worse than some cretin named Big (who also happens to be your brother) stealing the pair of mystical underpants left by your departed grandfather? Nothing, as far as the folks at Black Pants Studio are concerned. With the team's first release, the sandbox-oriented action and physics game Tiny and Big: Grandpa's Leftovers, we get to see just what happens when you give a guy a raygun, a grapple-device, and unlimited rockets, then turn him loose in a sun-parched ruined desert world to find his pants-thieving brother. To put if briefly: a whole lotta rocks will get sliced, tossed, juggled, and destroyed. 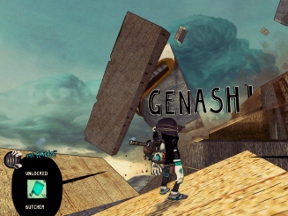 In Tiny and Big, you control Tiny, a goggle-wearing protagonist with a few helpful stone-manipulating tools at his disposal. For starters, there's the laser, a weapon that can be used to slice just about any rock surface you see in the game. Think of it like Nitrome's Ice Breaker games, only in 3D where you have to manipulate those rock chunks in order to progress. To help you push stones around, you're also armed with rockets, which latch on to and shove stones at your discretion, and a grapple tool that allows you to nab and tug movable rocks wherever you please. Those are in addition to your basic walking, jumping, and pushing skills, which Tiny uses at every single turn just to move through this ruined, pillar-filled world.

Bounding around the world, you'll complete stage after stage of puzzles that are equal parts head scratching and reflex testing in nature. Although the setting remains largely the same (a bright, desert world), you'll run through outdoor environments, ancient temples, and even carve your way through a giant statue's teeth. Further diversifying the slice-n-jump experience, Big shows up from time to time and decides to lob heavy objects at you, forcing you to deal with both the terrain and your troublesome brother at the same time. You'll need to master quick-draw raygun skills to survive, and a little luck never hurts, either! 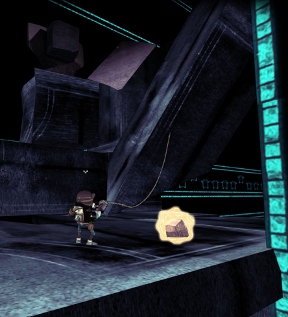 Analysis: Tiny and Big: Grandpa's Leftovers is nothing short of a creative, charming sort of game. The levels are filled with secrets and collectible items, including "boring stones" to hunt down, cassette tapes that add to your soundtrack collection, and hidden rooms with some surprising secrets inside. Tiny and Big creates a grand sense of freedom since you can slice and manipulate most of the game world, but there's also the added challenge of running through the stages to earn achievements, many of which encourage you to be thrifty with your raygun and work quickly to cross the terrain.

One cannot simply review Tiny and Big without gushing over the graphic novel-style visuals. The hand-drawn scenes look absolutely stunning, even in motion, and the characters are almost parodies of themselves, a fact you might have guessed from the game's initial story set-up. The music is also spectacular, and you can even buy the soundtrack, which features tracks from over 15 different bands! 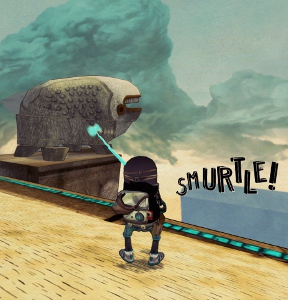 Tiny and Big: Grandpa's Leftovers does suffer from a few tiny setbacks, but nothing that ultimately scars the overall experience. For starters, note that the game ends after half a dozen levels (not including the tutorial or the arcade mini-games you can unearth), meaning you could blast through the experience from beginning to end in about three or four hours. That's longer than many casual games these days, and Tiny and Big is priced accordingly, so you definitely don't feel like you missed out on something when you reach the end. You just want more, because what's there is so utterly grand. A quicksave function would also be a nice addition. Even though the automatic checkpoints are frequent, when you're hunting for items to get that 100% ranking, you can't always re-do some of the crazy stunts you pulled off the first time around.

Although the quality isn't quite as polished as Grandpas Leftovers, if you're curious about the game's mechanics and want to try a demo of sorts before you buy, Tiny and Big: Up that Mountain is available for Windows, Mac, and Linux systems. It's only one level long, but it'll introduce the concept of laser cutting and grappling so you can see how serious the development team is about getting the gameplay just right.

Tiny and Big: Grandpa's Leftovers is an imaginative, quirky, and captivating game. It falls on the short side, which is unfortunate but not a deal breaker, but there's plenty of incentive to replay levels or just treat the whole thing as one big creative sandbox. Cutting, tugging, and rocketing gigantic stones is just as much fun as you'd imagine it would be!

There sure is a Mac OSX version available on steam and it even runs great on linux!

Interesting. It seems the GOG version is only for Windows, then.