Kurechii's real-time strategy tower defense hybrid Tiny Guardians for iOS and Android is an almost aggressively adorable and unexpectedly challenging little game that plays like a cross between Kingdom Rush and Defender's Quest. In it, little would-be sorceress Lunalie wakes up one morning to find her home ransacked and her powerful mentor missing, so naturally the only thing to do is gather up her summoning cards and set out on a journey to save the day! With her magical deck, she can call powerful heroes into battle to defend her against all the monsters and enemies she faces along the way, which is a good thing since Lunalie is... well, I don't know if she's a lover, but she's certainly not much of a fighter. Tiny Guardians is a fast-paced and surprisingly difficult little game that's packed with beautiful visuals, too-cute-to-be-killing-you foes, and simple to pick up, yet hard to master gameplay. For fans of tower defense looking for something different, Tiny Guardians is polished, professional, and a ton of fun. 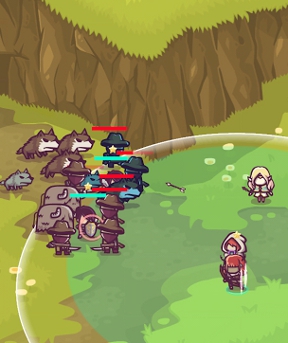 In each level, Lunalie will march along the path until she encounters enemies. While she can attack herself with slow, weak spells, her main defense is the characters you can summon in provided you have enough mana, which is earned from slaying foes. Soldiers are slow but have good offense and defense, while archers can deal heavy damage from far away but can't take much physical damage, to name just two available units. If a unit dies, it'll eventually respawn unless you're playing on a different difficulty level, and you can also use some of the mana you gain to level individual units up, making them more powerful and unlocking more attacks. You can only have a certain number of units summoned at any given time, and you can tap and drag on each one to direct them around the area encompassing Lunalie. If one of them dies, they'll eventually respawn, though you can speed it along by casting one of your handy-dandy healing spells... and maybe drop a fireball down on the dirty rats what done the deed for vengeance, too. If Lunalie dies, you'll need to restart, but if you win the level, you'll be granted stars based on how well you do that you can use to permanently upgrade your units. You'll also eventually unlock special challenge stages that will reward you with even special-er tokens you can save up to unlock optional unit types... or, of course, buy them outright through in-app purchases, though as some cost more than the game itself, you may want to focus on saving your points instead. Hey, those special challenge levels you unlock aren't going to beat themselves!

While it might be easy to initially dismiss Tiny Guardians as a "Kingdom Rush-alike", it's actually a very challenging and engaging little game. There's never really a point where you can just sit back and watch the action since your units need to be directed around wherever they're most effective, and this makes boss battles especially stressful. You need to think and act fast to deal with groups of enemies, each with their own abilities, strengths, and weaknesses, and carefully spending your mana is important. Levels tend to be long and quickly ramp up in challenge, and often summoning in as many units as you can, as fast as you can, is a great way to end up pounded into the ground. It's tense and challenging, but it's also fun, cute, and absolutely gorgeous, with bright colours and enemies that are adorable even when they're trying to melt Lunalie's face off with acid. Still, there are a couple of things that make Tiny Guardians feel a little kludgier than it could, like the way your summons take just a little too long to react to threats or retarget, or the way you can't move Lunalie around on the battlefield, so if something has an area of effect attack aimed at her, she's going to take damage... especially frustrating since Lunalie herself can't be upgraded and thus fails to feel as useful or vital as her summons. But there's so much charm and personality in the design, and each level offers such varied creatures and surprises, that it's easy to get sucked in. Tiny Guardians is a smart and stylish hybrid with a lot of thought and polish behind it, making it something fans of both casual real-time strategy and tower defense should think about checking out.