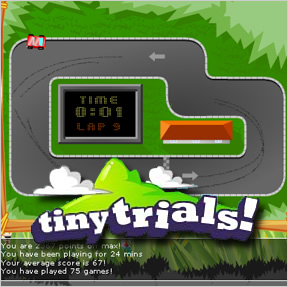 1. A childhood syndrome characterized by impulsiveness and short attention span, and sometimes by hyperactivity that often leads to learning disabilities and various behavioral problems.
(Courtesy dictionary.com)

Tinymania, the creators of Tiny Trials, seem to have had ADD in mind when they developed this collection of minigames. They come at you at a rapid pace, in succession, leaving little time to recover before the next one attacks with sadistic intent. It reflects the Four Second series from a couple of years ago, but adds an online leader board, updated in real-time to reflect your standing against other people playing around the world.

The minigames range from arcade games where you shoot monkeys in barrels to mind-benders where you have to guess the next number in a series. The scoring method varies by game. One has you controlling a little race car (think Super Sprint), racking up as many laps as possible in a limited time. Another has you tap the left and right arrow buttons to balance a ninja on a ball for as long as possible. 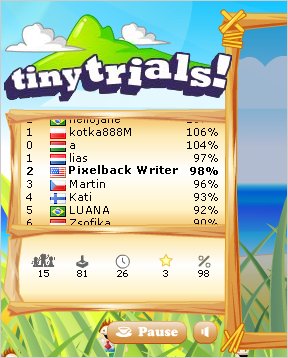 The real-time leader board keeps tabs on the currently logged in players and their progress. You are assigned a percentage based on your score, but I'm not sure what it is being compared to. The more games you play, the more points you gain, the further your percentage goes up, and you slowly climb the leader board. Of course, if you make too many missteps, it's going to take quite a bit of effort to take those top few positions.

Analysis: The creators of Tiny Trials actually refer to these games as "microgames," and that term fits them quite well. Each one lasts a maximum of 30-45 seconds, with many of them much shorter. In about 25 minutes, I went through almost 80 games, which includes time in-between games to show the score (about 5 seconds). The remarkable thing is the sheer number of games available. Out of 80 games, I did replay a fair number, but each one has a number of variations, such as shooting aliens popping out of craters instead of monkeys in barrels.

Replaying the same game usually won't give you a huge advantage, with one notable exception. The "Guess the Celebrity" microgame presents you with a silhouette and slowly fills it in with the features of a famous person's face. The goal, of course, is to guess the celebrity's name correctly before the reveal. Not so bad, I guess, except that there are only three variations, the choices are always the same, the answer is always the same, and they seem to show up more often than the other games. The fact is that these particular microgames exist to promote a trivia site. A banner for the site is displayed on the score screen after you choose your answer, and stays there for a good 15 seconds, much longer than any of the other scoring screens. I guess you've got to pay the bills somehow, but it's all pretty blatant, and really takes you out of the rhythm.

That quibble aside, I have to say that though the games are tiny, they're big on fun. Whether you sit down for a marathon go and try for the top spots in the leader board, or you just want a two-minute fix of quick gaming, you're bound to have a blast with the plethora of microgames in Tiny Trials.

Thanks for the recommendation, Simone!

Wow. This is addictive.

Im ranked 1st in the world

honestly I have a screenshot =)

What do you do with the stars?

This is addicting!
Even though I suck ;)
Putting in a good word for this game :)

After a while, the microgames just repeat and just gets a bit tedious after a while.

This is quite fun, just a heads up that this is a continuation of vaioware, which the same company did as an ad for sony: http://www.newgrounds.com/portal/view/352522

I have a feeling this game HAS no end...

Lol. This game is so much fun. My friends and are were competing on this, but I gave up after I reached #65.

Could someone please explain the game with the big red numbers behind a keyboard drawing. I click loads of times but still only get one star. What do I need to do?

Vogonviking: it's a picture of a keyboard, so maybe you should use the keyboard?

@Vogonviking: You have to hit random keys on the keyboard as fast as you can. The number will increase behind the angry keyboard as you do. That one took me a couple of tries to get, as well.

I don't understand what you are supposed to do with the clown game. I thought the longer you avoid falling, the better, but each time I make it to the end of the round I only get 1 point. I get more points by falling. What am I doing wrong?

What are you supposed to do in the shooting game? The ones with monkeys and (I forgot the other one). I just kept shooting them but I only got 1 star.

Thanks Marcus. I don't think I'll have another go just yet because once I start I just can't stop!!!

The game seriously overstays its welcome after a while.

It was fun at first, but it quickly became tedious. Once I got that awful "put the animals in their silhouettes" game for the third time in the row, I quit.

This game is entertaining for a little while but the fun wears off quickly. I enjoyed it the first time I played it yesterday but I tried it today and found it very boring. It would be better if there was at least some direction on the games, such as the shooting ones which I could not figure out how to get more than 1 point on...

The shooting game is a little temperamental (you have to aim exactly), but should be feasible. I found the numbers got a little tedious

especially since the answer's always 16!

Alright. I enjoyed it, but there were a few problems I had.

#1 Those annoying celebrity questions. I know they're the same and all, but they just get on my nerves.
#2 The music. It's the same in every minigame and it kinda gets annoying after awhile.
#3 The score system. No matter how fast you usually do something, you most likely won't get the perfect 100 points.

These are my opinions of problems on the game. If you don't find any of these considered problems, that's up to you. otherwise I give this game a 3/5 for at least being fun and addictive.