Potato chips and a TV. What more could a human being possibly want? Apart from the fulfillment of hopes and dreams and all that stuff, of course. It's been several years since Dan Russell-Pinson's point-and-click adventure series Tipping Point has graced our screens. The iPad debut bundles together all four previously released chapters along with a brand new fifth chapter that resolves the little cliffhanger from chapter four. Tipping Point is some of the best point-and-click adventuring you'll come across, and the story and setting make the game something truly special. 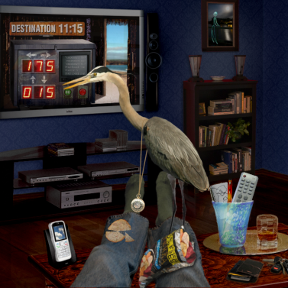 Tipping Point's interface is very easy to use; simply touch, tap or drag items you want to interact with. Remove close-up views of things by tapping the small X in the corner, just like closing a browser window. Tipping Point starts with an innocent evening of television and slowly moves into more and more surreal territory. The plot is a wild ride, and while the puzzles are a little on the unusual side, they're never obtuse or illogical. If you ever do get stuck, the in-game hint system is a marvelous piece of work. Instead of spoiling the solution outright, hints get progressively more specific until the answer finally clicks in your head. Best of all, hints aren't refilled by annoying in-app purchases or other modern gimmicks. Just wait a few seconds and more help will be available!

Check out the rest of the Tipping Point series right in your browser!

Tipping Point has not only withstood the test of time, but it actually seems more impressive on the iPad than in a browser. The touch interface is fantastic, the visuals have been improved and look lovely on a shiny iPad screen, and there's plenty of puzzles to keep you busy for hours. Whether you're an old fan or brand new to the series, the mobile version of Tipping Point is a fantastic place to jump in. And hooray for chapter five!!!

See New York and the conclusion from SonicLover below

I love Tipping Point but I don't have an iPad. :[

Oh wow, I actually thought they had given up on making a chapter 5. This is great news! Now to find an iPad on which to play...

Just blew through this. The way the fourth chapter ended, I didn't expect one more chapter to be the end of it.

Heck, there was a lot about the fifth chapter I didn't expect.

And I especially didn't expect to have to TRACE the numbers for that one combination instead of just connecting them. Ugh!

I just wish they either didn't limit the browser version to just the first chapter (just up to however many it used to have) or made it available to those of us without iPads or Macs.

Favorite gameplay element: the minigame to open the airlocks. Plotting a course in which the rocket could move, spin, protect the key, and get it to the lock in ten moves or less wasn't quite like any logic puzzle I'd seen before, and there were some nice "aha!" moments.

Favorite silly pop culture reference: "New York/London/Paris/Munich" (sing it with me, fellow children of the 80s: "everybody talk about pop musik!")

Space Invaders. I've figured out that a potential strategy for Level 3 is to hang out on the extreme right side and move as little as possible, but I've still been stuck on that level for far too long and am giving up for now. (Please tell me there aren't even more levels after that one!)

Okay, so that third round was a snap once I figured out the trick...and the final puzzle was another winner. That one and the airlock puzzle would make great casual games in their own right (which is high praise coming from me, since puzzles that get the "physics" tag aren't usually my favorites). Hope this chapter comes to other platforms soon so that a wider audience can enjoy it.

Sorry you guys are all disappointed that Dan decided to take the game mobile, but glad you left your comments so he can maybe come see them and decide what happens next.

I'm working on a walkthrough for all the chapters of the mobile game that are available now, since we sort of have to assume that more might be available in the future. ;)

If you have questions, hope you will post them until the walkthrough is available because we are always here to help.

Ok, what am I missing about airlock 1? There's no key to move around like in airlock 2 and the 'directional buttons' don't work. I fought my way through all of the chapters but now I'm totally stuck. Lol

The directional buttons won't work until you place the key.

Tommy's father gave you a key. Drag it from your inventory to the upper left corner of the screen where there is a faint picture of a key. When you get that yellow glow, the key will fall into the lock and you can start the mini game.

Thx Jazz ... I was stopped by a small problem with the game:

I put the key into the panel of the spaceship cockpit first and couldn't move it back into my inventory to use anywhere else. Had to restart Chapter 5. Ugh.

Hi Everyone! I'm Dan Russell-Pinson, author of the Tipping Point series. I'll be hanging out here for a while, so feel free to ask me any questions.

joeyt1968: Thanks for reporting this issue! FYI: I just fixed this bug and submitted an update to Apple. It should be live in about a week.

I added code to not allow the player to place the blue key in the cockpit until both airlock doors were unlocked...

See New York and the conclusion from SonicLover below

Love this game, but I'm obviously missing something. I'm at the orange/blue guys and can't figure out the solution. Checked the hints, did what they said but it's not working. Help please and thank you!

Hi! I'll double check the hints for this puzzle and see if they should be improved... In the meantime, here's how to solve it:

AH, I never would have thought about that. THANKS!!

FYI: Tipping Point Lite is now available in the App Store. You can now play chapter 1 of Tipping Point on your iPad for free. http://freecloud.com/c/TPLite

Daaaaaaaaaaan!!! A browser version of the new chapter please!

Augh. Giving up on the game for the night. Stuck in Chapter 5 and had a question:

Is Level 3 the last level of the Space Invaders game? If not, I'm done.

Was loving the game up to that point, but Level 3 of that mini-game actually caused me to punch my iPad screen. The iPad is fine, but... yeah, that was a clue it was time to stop.

Not to worry, mandichaos, Level 3 is the last of it. I also had a problem with the same part of the game which is why SonicLover finished the walkthrough for me when I hit my tipping point. ;)

This is a very old game. At least 3 to 4 years if I am not mistaken.

If you check the browser link in the review, you can find out exactly when the game originally came out.

This is now the mobile version that has been reviewed, and Chapter 5 has been added to the game.

How do you solve the New York Puzzle? Im really bad at this >.

I cannot figure out how to solve the NY puzzle. Here is what I have done so far:

I solve the word puzzle and then I am looking at the side of the building and see lights in the windows. I then bring up the circuit board control panel thingy with the red lights from Merman. I have tried hitting various buttons...but can't get anything to happen. I read that I am supposed to use the middle buttons...but no buttons seem to make a difference. What am I missing???

First off, I live for point n clicks, and this is a superb game. Thank you!

Second, I cannot get the pi trace puzzle for the life of me! I dropped the blue chip on the grill of the right tv, but no matter how many ways I write 3.14 on the screen with the pie, it won't register do anything!! Help!! Thanks!

Awesome game!
So frustrated. What is the code for London? I've tried to type in random combo's for what seems like forever. It starts with "do"

I can't get the following 3 right for nothing. Please spoil me?

Count how many letters the second letter is from the first and continue the pattern to complete the code by tapping on those letters in the name of the site.

If you get in trouble again, check the walkthrough above the comments. ;)

@CzRz
Sometimes, in order to go forward, you need to go backward...

PLEASE HELP US WITH THIS PROBLEM, me and Shahin Nezam have both been having the same problem, which is that we cannot, no matter how many ways we write 3.14 on the screen with the pie, it won't register do anything. Also, what do you do with the blue key? You're only suppose to have 1 right? Lastly, my phones screen is pretty small, so maybe that's why?(my phone is a kyocera: rise) please help, this game was so relaxing and amazing but recently it's just gotten irritating to play. Ps: in case you're wondering I did look at the walkthrough, but it didn't help

If the game isn't working as intended, you may want to contact the developer directly and check that you're playing on a supported device.

One note, sometimes puzzle solutions will not work unless you've completed all tasks required prior to arriving at said solution (they like you to find and closely view the clues yourself rather than going from a walkthrough).